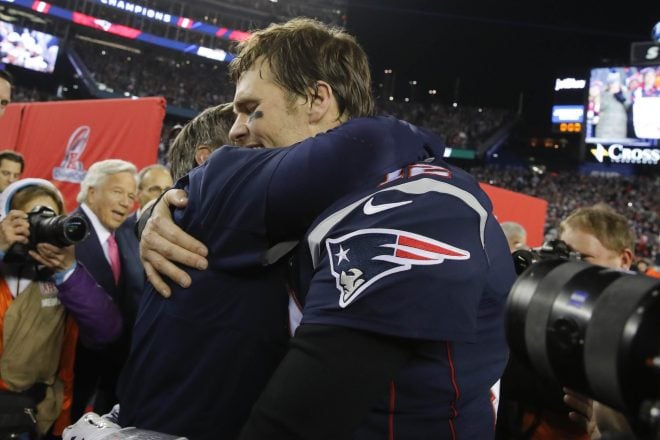 FOXBOROUGH – Sometimes you wonder if media types hiss and diss a particular team just to boost ratings and attract listeners, and if deep down inside these folks actually believe what it is they are saying.

Anyone who thought this AFC Championship Game against the Jacksonville Jaguars was a layup win looks like a fool now. Blake Bortles no longer has to prove to people that he deserves to sit at the big table with the rest of the great NFL players. And yes, this game had Tom Coughlin’s fingerprints all over it, even though he was up in the luxury suites all game long as team president and not head coach.

But the Patriots are still the Patriots, Tom Brady is still Tom Brady, and the defending champs can still do what they do. Faced with the loss of Rob Gronkowski to concussion protocol in the second quarter, having to deal with a Jaguar defense they knew was great, and with Bortles, who played perhaps the best game of his career contrary to what most experts predicted, the Patriots once again overcame a double digit deficit in the second half of a playoff game to claim victory. It has become so delightfully routine in these parts, and you never get tired of this sort of thing if you are a Patriot fan.

Danny Amendola, who has elevated himself to a higher pantheon, caught two fourth-quarter touchdown passes from Brady, and Dion Lewis secured the win with an 18-yard end run after Jacksonville spent all their timeouts. The Patriots escaped Gillette Stadium with a 24-20 win in the 2017 AFC Championship Game, and are headed to their NFL record tenth Super Bowl in two weeks in Minneapolis. Patriot Nation roared in celebration as honorary captain Drew Bledsoe handed the Lamar Hunt Trophy to Bob Kraft, the ninth such time this has happened to the venerable Patriot owner.

The game was a dogfight from start to finish. Jacksonville figured to play the Patriots tough on defense. But not too many people figured on Bortles having the game he had. All New England had to do, most people reasoned, was to stop the run and make your field goals. But Bortles was able to get into a passing rhythm for most of the game, and it took deep into the second half before the Patriots were finally able to slow him down.

One problem the Patriot defense faced early on was dump offs to running backs. Corey Grant, a third-string running back, caught two passes for 43 yards on the second offensive possession for the Jaguars. One went left, one went right, and in both cases, he was wide open with no outside containment. Bortles also worked the play action to perfection, as he got Patrick Chung to bite on a fake to Leonard Fournette and find Mercedes Lewis wide open in the right corner of the end zone for a four-yard touchdown pass to put the Jaguars up 7-3 early in the second quarter.

After a three and out, Jacksonville took over at their 23 and went to work again. Another dump off pass to Grant went for 15, then Allen Hurns caught two passes for 35 yards. Fournette and T.J. Yeldon covered the final 32 yards, with Fournette blasting in from four yards out to make it 14-3 Jags. Fournette met Kyle Van Noy head on and basically shoved him back into the end zone.

The Patriots did get a late touchdown on a one-yard run by James White near halftime to make it 14-10, and prevent Jacksonville from getting a double score. Two field goals by Josh Lambo made it 20-10 going into the fourth quarter, and the Patriot comeback was about to begin.

The Patriots used two gimmick plays in the final period, one worked and one didn’t. On their third offensive play of the fourth quarter, the Patriots attempted a double pass. Amendola took a pass from Brady on the left sideline and heaved one to Lewis. Lewis caught the ball and ran 22 yards to the Jaguar 33. But Myles Jack stripped the ball from Lewis and recovered the fumble, shocking the Gillette Stadium crowd and casting a hair of doubt as to whether the Patriots could actually pull this comeback off.

Jax went three and out, and the Patriots got the ball back quickly. Brady hit Brandin Cooks for 18 yards, then converted on third and 18 when he found Amendola over the middle for 20. On the next play, Brady ran a flea flicker and found Philip Dorsett for 31 yards on the left sideline, with Jack in a mismatch coverage. Three plays later, Brady found Amendola on a right slant pattern for nine yards and a touchdown, again with Jack in futile pursuit.

The Patriots got the ball back after a four and out but gave the ball right back on a four and out. Jacksonville could not move the ball deep in their own territory and punted after three plays. Amendola took the ensuing punt on the 50 and scampered 20 yards to the Jacksonville 30. Five plays later, Amendola made a miracle leaping grab at the very back of the end zone keeping both feet in bounds to put the Patriots in the lead for the first time since 3-0 after the opening drive of the game.

Jacksonville had all three of their timeouts and the two-minute warning. From their own 25, Bortles hit Marqise Lee for eight yards, then found Dede Westbrook for 29 yards along the left sideline, beating Stephon Gilmore. Thanks in part to a sack of Bortles by James Harrison, the Jags were faced with fourth down and 15 from the Patriot 43. Bortles dropped back and found Westbrook along the right sideline and lofted a pass his way. At the last second, Gilmore earned every bit of his new contract by leaping up and knocking the pass away.

The Jaguars still had all three of their timeouts. Lewis lost two yards on first down and gained three on second down. Needing a first down to clinch a trip to the Super Bowl, the Patriots lined up in an I-formation. With old reliable fullback James Develin leading the way, Lewis ran around left end, found a hole, and squirted through it for 18 yards as the home crowd erupted in celebration. Three victory kneel-downs brought out the trophy podium.

Brady finished with 26 of 38 passing for 290 yards, two touchdowns and a passer rating of 108.4. Amendola had seven catches for 84 yards and two touchdowns. Cooks had 100 yards receiving on six catches and was the benefactor of two long pass interference calls on A.J. Bouye. In defeat, Bortles was 23 of 36 passing for 293 yards, one touchdown and a 98.5 rating. Hurns led the receivers with six catches for 80 yards.

The Patriots will play Philadelphia in Super Bowl LII in two weeks, a “rematch” of Super Bowl XXXIX. The Eagles, despite being three-point home underdogs, throttled the Minnesota Vikings 38-7 and prevented the Vikings from being the first team in NFL history to play in a Super Bowl in their home stadium. Former Patriots LeGarrette Blount and Chris Long will try to beat the team they won the title with last year. Nick Foles will try to become the first backup quarterback to win a Super Bowl in 27 years. The Patriots have already been installed as a 5 ½-point favorite to win their sixth championship.

For the second time in franchise history, the Patriots will be going to their second straight Super Bowl and third in the last four years. When this last happened, it was the aforementioned Super Bowl XXXIX. Good omen?

When you have Brady and Bill Belichick, it’s about championships, not omens.