2 weeks ago at 11:37 am ET
Follow @IanLogue
Posted Under: Patriots News 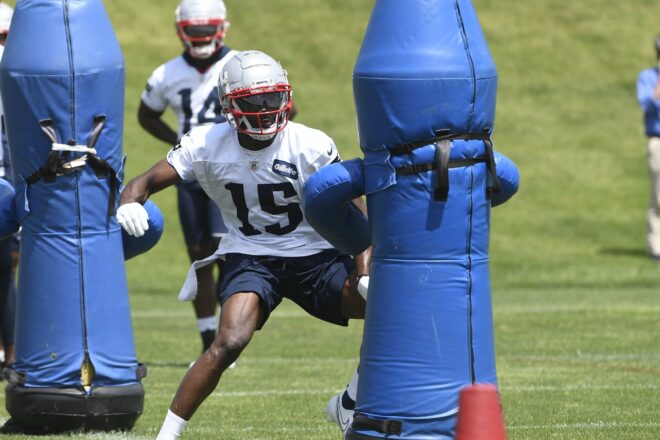 – Looking at some numbers from last season, it was interesting to see the improvement offensively when it came to the team’s ability to score points.  We recently mentioned the time of possession improvement, but the New England Patriots also made another massive jump in points per game.  They went from being ranked 27th in that category in 2020 while averaging 20.4 points per contest, up to 6th in 2021 at 27.2.  Looking back, they only scored 14 or fewer points twice all last season, compared to six times in 2020.

– Rookie Mac Jones obviously played a key role there, with Jones being efficient with the football along with the fact he threw 22 touchdowns.  The thing about Jones is that there were few questionable decisions or throws from the rookie, which clearly was a nice improvement from the previous season.  So far, he’s already looked even better during OTAs and hopefully, that growth will continue next month when training camp begins.

– Jonnu Smith and Nelson Agholor remain two key players to hopefully get more involved as neither was much of a factor in the passing game in 2021.  Smith was big as a blocker, but he caught just 28 passes for 294-yards and one TD all last season.  Agholor didn’t fare much better as he caught just 37 passes for 473-yards and 3 touchdowns.   Both players have already talked about the improvement in their comfort level heading into year two, which should hopefully see better production from the two this season.

– Agholor’s situation is probably the most frustrating, especially given his salary.  His base salary jumps to $9 million this year and has him with a cap hit of $14.8 million.  That’s a big sum and it’s still not out of the realm of possibility that he could be moved prior to training camp given what’s a fairly deep group of receivers.  The Patriots are severely in need of cap relief as, according to cap expert Miguel Benzan, they’re sitting with just $142,280 with several draft picks still left to sign.  So something has to give and Agholor’s status remains something to keep an eye on in the coming weeks.

– Another thing worth noting is, of Jones’ 13 interceptions, five of them came on targets to Agholor (3) and Smith (2), with Jones throwing a pick in three straight games at one point when targeting Agholor (against the Saints, Buccaneers, and Texans).  Those two were never really on the same page in 2021, which, if Agholor is on the roster in Week 1, definitely needs to improve this season.

– From there, the next question is going to be how DeVante Parker impacts things as well as how long it will take before we see rookie Tyquan Thornton get involved in the offense.  Parker reportedly looked good during OTAs and he’s coming off a season having caught 40 passes for 515-yards and 2 touchdowns in just 10 games in 2021 and seems poised to take on the role that N’Keal Harry never settled into.

– Speaking of Harry, he still remains another key question mark as the Patriots head into training camp.  Given how crowded this group is, and his lack of production, it would be hard to imagine seeing him surviving this time, especially after being relegated to the third-string rotations during OTAs.  While there have been multiple outlets making trade suggestions (one recent one from yesterday suggested Green Bay), he remains on the roster and is getting ready for what could be his final training camp with the team.

– Down in New York, one thing that quarterback Zach Wilson talked about is the fact that he was able to have more time this offseason to work with his teammates, which he believes will help him heading into the season.   “I felt like one thing I kind of missed out on last year was just getting as many live reps as I could, especially before the season and just routes versus air with our guys,” Wilson said via the Jets’ official site. “So, I kind of just reached out. I was going to a concert out in Nashville, so I was like, ‘You know what, this is perfect timing to go get some work in with Corey [Davis].’ So, we got to put something together there. I was out for Arizona for a little golf tournament, we had four guys there. Miami there was a bunch of guys there, so I kind of got to make my trips around.” Wilson added that this work should hopefully help make all of them better.  “I think that stuff kind of goes a long way,” said Wilson. ” These receivers, they want to be great. My job is to let them be great and to get the ball into their hands.”

– Staying with the Jets, receiver Denzel Mims reportedly had a strong showing at OTAs and looks like he’s poised for a bigger season.  Head coach Robert Saleh said that the 24-year-old improved on the things they asked him to work on and that he’s headed in the right direction.  “Denzel is doing better. He’s second time around, he’s in fantastic shape, looks really good,” Saleh said via SI.com. “He’s working on the things that we’ve asked him to work on with regards to the catch point and all that stuff, contested balls. And, obviously, grasping the offense. Obviously, we all, the whole organization, has work to do in terms of reaching the point where we’re not thinking about what we’re being asked to do, but he’s a lot further along than he was a year ago.”  Mims wasn’t much of a factor against New England last season, catching just 1 pass on two targets for 6-yards, which came in their second meeting on Oct. 24th.

– In Tennessee, quarterback Ryan Tannehill took a lot of criticism this offseason coming off of what was a devastating performance for him in the postseason.  He spent some time going to therapy and has turned the page and said now he’s using all the adversity he dealt with as motivation.  “Like I said, it’s a scar that I’ll carry with me,” Tannehill said. “But I am looking forward to this year. [I’ll be] using it as fuel as I move forward. It’s something I’ll always remember, but at the same time, I dealt with it, it’s in the past, and now I’m using it as fuel to move forward.”

– It’s possible that when the Patriots meet Josh McDaniels and the Las Vegas Raiders this season, Ndamukong Suh could be someone New England’s offensive line may need to be wary of.  Suh said during a recent interview on ESPN’s NFL Live that he’s had talks with some guys on the Raiders’ roster as he continues pondering his options for the upcoming season.  “Chandler Jones and Maxx Crosby, I was exchanging messages with them the other day,” Suh said via ProFootballTalk.com. “It’s an interesting opportunity for sure. We’ll see where it kind of ends up. But that AFC West is very, very tough — which would be fun. You get out of that, you’re almost destined to get to the Super Bowl.”  Adam Schefter reported that the Buccaneers are out of the picture, which means Suh will definitely be playing elsewhere in 2022.