5 years ago at 5:00 am ET
Follow @IanLogue
Posted Under: Patriots Stat Breakdowns 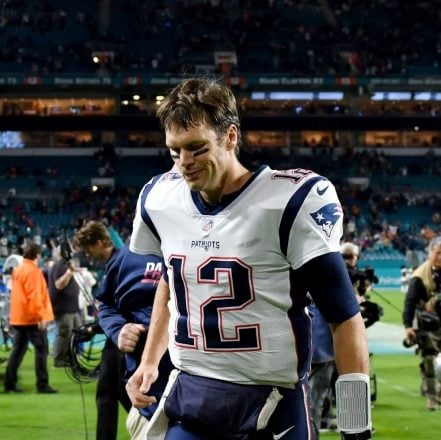 Tom Brady went from having an MVP caliber season to an un-Brady-like finish where the Patriots weren’t quite moving with the same precision in the passing game as he was prior to an apparent Achilles injury he suffered against Oakland.

Over the final six games, Brady and the Patriots struggled on third down, including a game down in Miami where New England finished without a third down conversion for the first time in 26-years.  Some started predicting Brady’s demise, but instead, the numbers essentially show that Brady simply wasn’t himself while dealing with the injury.

The final two games of this season still weren’t easy, with Brady completing just 5-of-13 (38%) on third down over that span, including one touchdown and an interception.  However, Brady was 3-of-8 Sunday against the Bills, which saw Rob Gronkowski essentially taken away as the Patriots’ game plan kept him in as a blocker and skews those totals.

If it wasn’t bad enough Brady got hurt, he had to deal with his own injury while dealing with ones from his own team that factored into those numbers. With Gronkowski out of the passing game Sunday, also missing was James White, Mike Gillislee and Rex Burkhead, who joined Chris Hogan on the inactive list.  Hogan spent seven of the final eight games on the sideline, appearing in just the game in Miami while Rob Gronkowski was suspended. Hogan played 55-of-61 snaps (90%) in that game, but still wasn’t himself after he finished catching just one of the five passes he was targeted on.

Meanwhile, Mike Gillislee missed the same span, with the former Bills running back playing in the second to last game of the year against Buffalo. Also gone was Marcus Cannon, who went down after the Chargers game and was on the inactive list for the next five weeks before eventually ending up on injured reserve.

Other than Cannon, each of those other players are hopefully expected to be healthy by the time the Patriots play their first postseason game, and Brady feels like that should certainly help their offense.

“I mean, if those guys are able to get out there and play, I think anytime you get good players healthy, it helps a lot,” Brady said after Sunday’s win.  “So, there’s a lot of guys, like Brandin Cooks, Danny [Amendola] – they played a lot of football this year and have been out there for a lot of snaps – Dion Lewis has. So, if guys can kind of take some snaps off, I think throughout the week of practice and the games, I think that really pays off.”

“So, you’d like to be able to use everybody, and we have a good roster, especially on offense, and a lot of good skill players. I think it’s got to be more than just two or three guys doing it. If we can get five or six guys healthy and everyone plays a role, then that’s going to be great for offense.”

With a bye up next and plenty of time to get healthier before their first playoff game, hopefully, we’ll see Brady and his supporting cast back and at full-strength when they take the field again one week from Saturday.