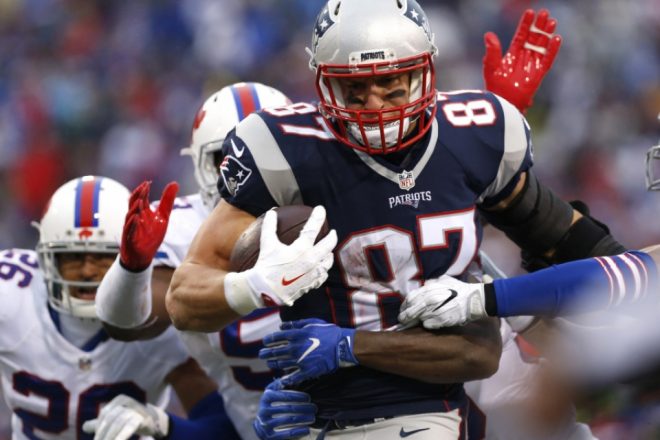 The Patriots took care of the Bills again and won by 21, but it wasn’t as easy as the score would indicate. Buffalo had a much better game plan this time around and played hard. The score was very close until about midway thru the fourth quarter when the Pats pulled away.

This one had more controversy as Kelvin Benjamin appeared to snag a go-ahead touchdown just before the end of the half. The referees signaled a touchdown but the league’s replay officials, (which took forever) decided it wasn’t a catch. Whether you believe it was a catch or not, it certainly appears that the league’s officials in New York are adding to the problem with over-analyzing these things rather than simplifying them.

But in the end, the Bills with an extra four points or not, couldn’t stop the Patriots or Dion Lewis and New England scored on six straight possessions. Tyrod Taylor and the Buffalo offense weren’t going to match that and the Pats win assured them of their eight straight 12-win season and a first-round bye in the playoffs.

Tom Brady much like the first game in Buffalo wasn’t sharp in the early going, before getting it going in the second quarter and beyond. He was late in throwing a slant to Kenny Britt which resulted in a Jordan Poyer pick-six and a 10-3 Buffalo lead. He threw well behind Rob Gronkowski and then overthrew him on passes where he was wide open. But he quickly found his game.

After the pick-six, the Patriots would outscore Buffalo 34-6 and Brady began heating up. He didn’t throw an incompletion in the second half and ended up 21-28 for 224 yards with 2 TDs and an interception.

No James White, no Rex Burkhead? No problem. Dion Lewis, the guy whose name former Bills coach Rex Ryan claimed he didn’t know slashed Buffalo again. Lewis headlined a Patriots ground game that gashed the Bills for 193 yards. The Patriots knew the Bills were selling out trying to stop Brady from throwing and had a slew of smaller defensive backs in to stop the pass. The Patriots ran right at this group with deadly effect. New England ran for 191 the first time the teams played and 193 on Sunday.

Lewis led the way with 24 carries for 129 yards and two touchdowns. In two games against the Bills, this season Lewis ran for 221 yards. It is safe to say they know his name now.

The wide receivers again this week were pretty much a non-factor in the game. Buffalo’s secondary as we said, tried to take them away by flooding the field with DBs and it worked for the most part. NE’s wide receivers had a combined 7 catches for 87 yards.  Danny Amendola had three catches for 28, Phillip Dorsett had one catch for 24 yards, newcomer Kenny Britt had just one reception for 16 yards and Brandin Cooks had just two receptions for 19 yards, but he did draw a 49-yard pass interference penalty.

Rob Gronkowski was a big factor in the passing game catching five passes for 67 yards including a sick 17-yard touchdown grab. Running a go route down the left sideline, Brady threw a back shoulder pass that Gronk snagged one-handed and was able to get both feet down for a highlight reel touchdown. He also drew a couple of pass interference penalties on the Bills as well as producing his normal stellar work in the running game.

Dwayne Allen had two catches for 26 yards while Jacob Hollister had a catch and a run for five yards each. On his run, if he stayed with Gronk and Allen to the outside, he had a touchdown. But he cut back inside and was tackled on the three.

Gronkowski also was asked about the Patriots success (12+ wins in the last eight seasons) and had a typically Gronk answer:

The offensive line’s play was very good this week, especially in the passing game. Brady was sacked twice but was only hit on two other occasions. He worked from a clean pocket for most of the day.

The running game was on point again as the offensive line was winning the battles there and opened up big holes for Lewis to exploit. They were getting to the second level and keeping the linebackers off the runners.  The Patriots set the pace and dictated how the game was going to be run.

It was a good day for the Patriots front seven especially the defensive line. The Bills ran for just 84 yards on 24 carries, a 3.5-yard average. LeSean McCoy had the lion’s share of that with 17 carries for 71 yards. He had a nice 18-yard run on the edge, but the longer the game went on, the better the run defense got especially inside. The Patriots sacked Taylor six times and had 11 tackles for loss.

Marquis Flowers had a big, big day as he notched 2.5 sacks and had three tackles for loss and three QB hits in the Bills backfield. Elandon Roberts shared a TFL with Eric Lee but this week, there weren’t the glaring errors with misses and filling the wrong gaps as the linebackers were prepared and stepped up.

Especially with Flowers who has always been known as a STs guy but had a career-type of a day that was an unexpected bonus.

After having their best day of the year the last time the teams played, the New England secondary had its issues all day long with the Bills receivers. Kelvin Benjamin is a beast. Even on one leg, (he needs MCL surgery after the season), the 6’5, 243-pound Benjamin gave Stephon Gilmore fits. The Bills were high-pointing the ball or allowing Benjamin to use his body to screen off Gilmore where he had five catches for 70 yards. But at least he was there with him all day.

Malcolm Butler had an awful day against Deonte Thompson who had Butler turned all around a few times with four catches for 91 yards. Butler was caught biting on a double move and just had a rough day all-around. Shady McCoy had five catches for 76 yards, with most of it coming on an outstanding 39-yard run where he caught a screen pass at the line of scrimmage and weaved and faked his way thru the Patriots secondary down to the 10-yard line.

Pat Chung did a pretty decent job on Charles Clay and Devin McCourty was solid in the back end but it wasn’t the greatest day for the secondary as a whole. But they were bailed out a few times by Taylor’s poor decisions to not throw the ball away, where he took horrible sacks and by curious decisions by the Bills coaching staff.

No worries here, Stephen Gostkowski was perfect in his four extra points and three field goals. His kickoffs as always are spot on and allowed the Patriots coverage units to do a great job of limiting the Bills return game. Ryan Allen punted only once for 44 yards with no return. Buffalo’s coverage units also had a very solid game. Special Teams play only played a key role in the Bills’ missed 50-yard field goal.

Bill Belichick had the team coming home after a long road trip and a particularly emotional win over the Steelers. Although they started slowly, the team was prepared and they had a good game that was executed well. As always, the Patriots halftime adjustments were outstanding, outscoring Buffalo 24-3 after the break.

Josh McDaniels’ offense was missing Julian Edelman, Malcolm Mitchell, Martellus Bennett, Marcus Cannon, Rex Burkhead and James White. And they still scored 37 points without a big turnover from the defense. That was their second highest output of the season.

And for all the hand-wringing about the Patriots defense, Matt Patricia’s unit gave up a total of nine points on just three field goals, the only touchdown the Bills scored in two games this season was by their defense. While it was neither perfect nor pretty, it was still effective.