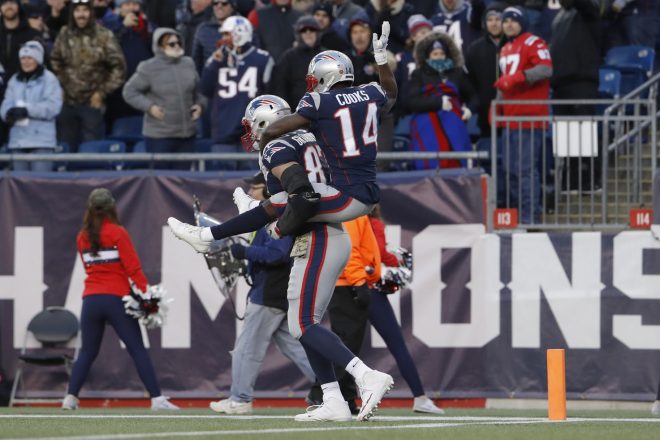 Entering their Week 12 match up with the Miami Dolphins, the New England Patriots were beginning a stretch of five pivotal AFC East divisional games in six weeks to close out the regular season.

In the first quarter, it appeared the Patriots had been forced to punt to open the game, but a little trickery from Bill Belichick kept the drive alive.

Unfortunately, it came at a cost, as Nate Ebner went down with a non-contact injury on the run and was lost for the season.

#Patriots injury update: Nate Ebner is out with a knee injury. #MIAvsNE

Winslow Townson of @usatsimg captures the moment Nate Ebner plants his foot on the fake punt, which resulted in his knee injury. pic.twitter.com/zdtT6rq97g

League source also confirms #Patriots safety Nate Ebner will be placed on IR after suffering knee injury vs. Dolphins. Was having another All-Pro caliber season.

The fake punt setup the first score of the game following this deep pass from Tom Brady to Phillip Dorsett.

The big play on the #Patriots touchdown drive was Tom Brady to Phillip Dorsett for 39-yards https://t.co/VV7sfJGepR

Running back Rex Burkhead would score from inside the 10 to put the Patriots ahead 7-0.

It didn’t take long for Brady to attack the Dolphins secondary, as he found tight end Rob Gronkowski towards the end of the first quarter to put his team up by two scores and set some Gronk records in the process.

Rob Gronkowski leads all players in receiving TDs since entering the NFL in 2010 (74), despite missing 25 games in that span#MIAvsNE

Just when it appeared the Patriots were going to run away and hide, backup center Ted Karras, who was replacing the injured David Andrews, botched a snap that was recovered and returned by the Dolphins defense to cut the score in half at 14-7.

Needing a response, Brady found Brandin “Cookie” Cooks deep to setup a third touchdown score of the day to open up the second quarter.

Now THAT is some good defense. pic.twitter.com/CIKHzT8dmj

Brady would find Rex Burkhead for a second time, this time on the receiving end. 21-7 Patriots.

Get you a running back who can do both.

@RBrex2022 adds a receiving TD to go with his rushing TD. pic.twitter.com/uCQ8GVyi1I

The defense would allow a field goal to cut the score to 21-10, but they also made big plays when needed most, including this clutch interception by cornerback Stephon Gillmore just before halftime. The Dolphins were inside the Patriots 20 but lost out on any points.

No "Pit of Misery" today for the veteran CB. Huge play to close out the first half. https://t.co/xU1ETmfMei

In the third quarter, Tom Brady continued to throw right at the Dolphins backfield, and connected for a second time to Rob Gronkowski to extend the lead to 28-10.

Who ya gonna call?

The Dolphins were kept out of the end zone until the fourth quarter, where Kenyan Drake hauled in a Matt Moore touchdown. It would be the only Dolphins offensive touchdown of the game. 28-17 Patriots.

Drake finds the end zone for six from a Matt Moore pass!#MIAvsNE pic.twitter.com/TRy4EaoTTi

Another Dolphins field goal cut the lead to 28-17, but any chance of a comeback was killed as Brady drove the ball down the field for a back breaking “shuffle” touchdown pass to Brandin Cooks to go up 35-17.

All aboard the victory bus pic.twitter.com/GTp8KHoBi3

Despite a few miscues early on, the 35-17 score would stand as the Patriots earned their ninth victory of 2017 and their seventh in a row.

#Patriots streak of allowing 17 points or fewer up to 7 straight games. Longest streak since 2006. The franchise record is 9 straight games in 1993.

Patriots clinched their 17th consecutive season with a winning record, the longest streak since 1970, surpassing the previous record of 16 held by the 1970-1985 Dallas Cowboys and 1983-1998 San Francisco 49ers.

Gronk thinking aloud about his TD celebration "We got yelled at we aren't allowed to talk about celebrations. But I kind of want to talk about it, but I kinda don't because I will get in trouble. So I don't know what to do. #Patriots pic.twitter.com/SC2UpFE9V5

Hey Danny, don’t worry kid, you can go for the next ride! #giddyup yeee!!