3 years ago at 10:30 am ET
Follow @SteveB7SFG
Posted Under: Patriots Commentary 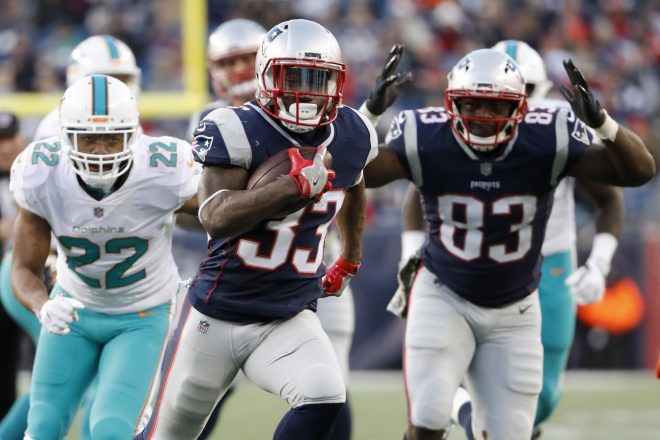 Wash, rinse, repeat. The Patriots used a familiar formula to beat the Miami Dolphins in Foxboro where Miami has struggled to win in the last decade. They were the more physical team and controlled the line of scrimmage, they were smarter and refused to partake in the increasingly chippy, cheap-shot play that is always the Miami M.O. when they fall behind. The result was a 35-17 win where the Patriots didn’t bring their A-game to the table but were sufficiently better than their opponents.

The running game and passing games were very evenly balanced in this one and the defense allowed only 10 points while notching seven sacks. All in all, it was a game where Bill Belichick and the coaches will find plenty to critique but at the same time, they had to like what they saw. Scoring 35 points on a day where you aren’t clicking on all cylinders is pretty impressive

Tom Brady wasn’t as sharp as he’d been the previous two weeks but he still finished with four touchdown passes and a 114.1 passer rating on the day. He started off uncharacteristically off with two back-to-back poor throws on the first series but then quickly went about his business of dismantling the Dolphins defense.

As the game went on, Miami’s pass rush was getting more and more pressure on him, but Brady kept his eyes downfield and delivered. He got knocked flat on his back but delivered a 15-yard touchdown pass to Rob Gronkowski.Brady also recognized mismatches and delivered easy scoring throws to Rex Burkhead and Gronkowski again.

But he made an uncharacteristic poor decision by trying to squeeze a pass into too tight a window which Bobby McClain picked off. He also bobbled a shotgun snap that caused him to end up getting sacked by Cameron Wake.

But the feeling here was, the Patriots found big holes in the secondary and if they had to, they could have exploited them even more, they decided to go the conservative route in the second half.

The Patriots continue to ride Dion Lewis’ hot hand and he rewarded them with a career-high 112 yards on 15 carries on the ground. Lewis is an elusive back as you will find, Chris Price equated trying to tackle Lewis as trying to tackle a puff of smoke. But some of his most impressive runs were the ones of the shorter variety. Hit behind or at the line, he’d spin and show good power and drag a defender for a short gain, making something out of nothing.

Rex Burkhead continues to shine and shows that his signing was indeed a bargain move. He rushed for 50 tough yards on the ground and scored a touchdown on both a run and a pass, a mismatch that Brady recognized and hit him for an easy score.

James White’s snap counts are down right now but don’t despair, the team will need him before the season is finished and he’s an integral part of things. With Josh McDaniels, it is all about the matchups and they’re riding the hot hands right now.

James Develin was solid as always at fullback and played about 20 snaps. Mike Gillislee was inactive for the third week in a row.

Brandin Cooks once again was the big gainer for the offense in the passing game, catching six passes for 83 yards and a touchdown. His score was on a glorified handoff flip from Brady on a Jet sweep where Cooks turned on his afterburners and raced for the pylon and then rode Rob Gronkowski like a racehorse off the field. On a third and 13, Cooks toasted Miami for a 37 yard gain where he was wide open. Those dreaded communication breakdowns…

Phillip Dorsett did the same thing where the Dolphins blew the coverage and Brady hit Dorsett for a 39 yard gain. Good to see him getting involved a bit. He’s been working hard but hasn’t had much to show for it.

Danny Amendola had a quiet day catching just one pass for 15 yards. He and Bobby McCain got tangled up after a running play and McCain threw a punch and got tossed as a result.

Rob Gronkowski was a mismatch that we pinpointed in our pregame matchup piece and the Dolphins just don’t have anyone that they can put on him. He beat Reshad Jones on his first touchdown, using his size and strength, bodying Jones away for an easy TD from Brady. On his second, he was too fast for Kiko Alonso and easily beat him to the sideline. He ended up with five catches for 82 yards and a pair of scores. And to show that he’s an equal opportunity scorcher, he smoked safety T.J. McDonald selling a block and shooting past him for a 21-yard gain.

Dwayne Allen continues his strong play of late and was very good in the running game with some excellent blocking. He also caught one pass for just two yards. He and Gronkowski both made excellent blocks on Cooks touchdown.

Jacob Hollister played less than five snaps on offense and Martellus Bennett was a scratch and has been placed on IR.

The offensive line was missing two starters again, right tackle Marcus Cannon and center David Andrews but this time, they got pushed around in pass protection. Although they allowed just one sack, Brady was harassed for most of the afternoon and hit hard eight times. And each lineman got beat at different times. Ted Karras subbing for David Andrews snapped a ball too soon while Brady was still checking the defense and the ball was recovered for a Miami touchdown.

The running game was a different story. Taking advantage of Miami’s aggressiveness, the Patriots rushed for 200 yards, taken back to 196 because of Brady kneel downs. That was impressive and they opened up big holes for the backs to exploit. So while the pass protection was bad across the board, the run support was outstanding.

Yes, Virginia, the Patriots do have a pass rush. The Patriots defensive line took advantage of having a big lead and the Dolphins abandoning their running game and teed off. They were in straight attack mode in the second half and the sacks came in bunches. Miami’s offensive line was overmatched at the point of attack and it showed.

Trey Flowers had his best game this month, getting a pair of sacks, a few QB hits and two tackles for a loss behind the line. He also forced a fumble.

Malcom Brown returned from an injury and looked stout at the point of attack. Ditto for Alan Branch and Lawrence Guy. The Pats even got a good push from the interior of the line which was a plus.

Rookie Eric Lee in his first NFL game got about 20 snaps due to the situation and showed what he could do. He got his first NFL sack on a nicely designed twist and a QB hit. The Dolphins rushed for only 67 yards on Sunday, while part of that had to do with the score, that is the kind of day, the coaches were looking for.

Elandon Roberts had arguably his best game as a Patriot on Sunday. Matt Patricia knows he’s at his best as an attacking downhill player and Roberts utilizing the Hightower/Collins A-gap blitz was very effective. He showed good patience and waited for the line to part and exploded up the middle throwing down Matt Moore for one sack and used his speed to chase him down on another.

Kyle Van Noy playing a mix of LB/edge rusher had a sack as well as a pair of quarterback hits before he left with an injury. Roberts and Van Noy were outstanding on Sunday. David Harris had a mixed day, missing on a couple of tackles he normally makes but providing good thumping depth inside. Trevor Reilly and Marquis Flowers continue to provide good serviceable depth at linebacker although each was injured in the game.

Stephon Gilmore had an outstanding day. He drew DeVante Parker one-on-one and held him to one catch for five yards. At the end of the first half, he came up with a huge play, perfectly covering Parker on a fade and then reacting well to the ball in the air, snatching it away for an interception. He should have had another on the Dolphins final play of the day, again in perfect position, but Duron Harmon snatched the ball away from him.

Jonathan Jones had a very solid day. The Dolphins decided to pick on him with Jarvis Landry and while Landry had a solid day, Jones was feisty, stuck to his man and limited the YAC (yards after the catch). The more he plays the more confidence he’s playing with.

Malcolm Butler had a mixed day, intermingling some great plays with some not-so great. He took a brutal 34-yard penalty on Kenny Stills where if he turned around, he had an easy interception. Stills, however, while not “getting in Tom Brady’s head” with his sidelines trash talking, was invisible until the second half when the game was out of reach. The same for tight end Julius Thomas, who at first glance, had a solid day, five catches for 52 yards. But all of it came in garbage time. Pat Chung had a solid game as did Devin McCourty. Duron Harmon’s snaps were limited this week as the Pats went with three corners. Jordan Richards got about a dozen snaps late.

The Special Teams got off to a great start with Nate Ebner taking a fake punt on the Patriots first possession and racing for a first down. Great call and superb execution, with a tremendous block by Brandon Bolden to free him…Hulk Smash. Unfortunately, Ebner was injured on the play and was placed on IR. Losing Ebner, Reilly, and Flowers on the ST units hurt their coverage, which was just ok.

Ryan Allen missed an opportunity to pin Miami deep and put just his third punt of the year into the end zone. Stephen Gostkowski’s kickoffs were spot on, forcing Miami to run them out and was perfect on all five extra points.

Bill Belichick eased back the workload this week after a long two-week road trip and although the execution wasn’t as sharp on Sunday, the team was ready to play and showed good restraint, not getting drawn into the cheap shot game that Miami has been doing for years. The biggest difference between the two teams, (other than QB) is the self-discipline, the Patriots have it and Miami has little of it. And it shows.

Josh McDaniels had a great game plan, taking advantage of a leaky Miami run defense and keeping Miami off balance all day long. They recognized mismatches all over the field and McDaniels made them pay. The Patriots were 5-5 in the red zone.

Matt Patricia’s defense is getting better and better and as they become more comfortable in their roles, he’s opening things up more and more. We saw A-gap blitzes, corner blitzes, safety blitzes. They’re not predictable and it is going to give opponents something to think about in the weeks ahead. Miami was 2-11 on third down and in the past five games, Patriots opponents are averaging just 217.2 yards passing per game and just 13.1 points.

WATCH: Cam Newton Meets Up With N’Keal Harry For First Workout Together
By: Robert Alvarez
| Patriots Video
Cam Newton has first workouts with teammate N'Keal Harry on the campus of UCLA as he continues to build chemistry with Patriots receivers.
6 days ago