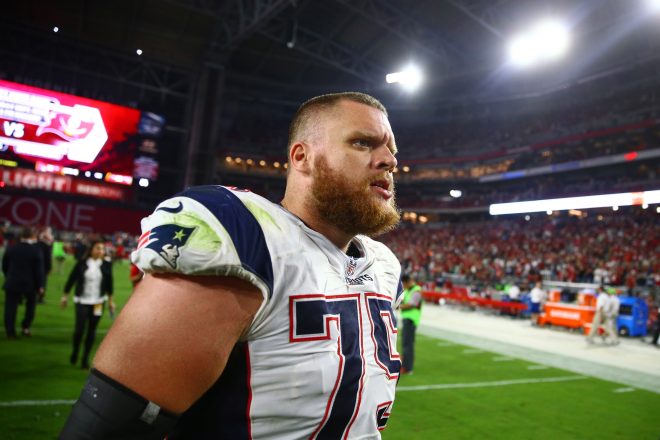 After losing center David Andrews to injury, what Ted Karras managed to do in his absence while filling in has certainly been impressive.

Up until Sunday’s game against Miami, Karras had been flawless, with the average fan probably not even realizing the Patriots had made a change up front as Karras took over one of the more difficult positions on the offensive line.

However, he finally had his first miscue early in the second quarter during the Patriots’ 35-17 win over the Dolphins on Sunday.   With New England leading 14-0, Karras snapped the ball early on a 2nd-and-4 from their own 38.  Brady never had a shot at it, as the ball flew past him and ignited an all-out race between Brady and Miami’s defenders to track it down.

Brady made a valiant effort, but the Dolphins scooped it up and scored a touchdown, which at the time pulled Miami to within seven at 14-7.

After the game, Karras took complete responsibility for the miscue and he was just glad it didn’t cost them further.

“That’s 100 percent my fault,” said Karras.  “I had to put it away and we went down and scored on the next drive. I just snapped it early. It was 100 percent on me. It was kind of a nightmare but we overcame it.”

It was a tough play and could have changed the momentum of the game, and it could have been the start of further mistakes had Karras let it rattle him.

Instead, he played well the rest of the way and that was one of the big reasons the Patriots went on to score 21 more points en-route to their 9th win of 2017.

It’s not often a miscue should garner praise, but it’s certainly well-deserved.  Bill Belichick tends to be a fan of mentally tough players and Karras definitely proved on Sunday that he falls into that category after what may have normally been a much worse situation for a lesser player.