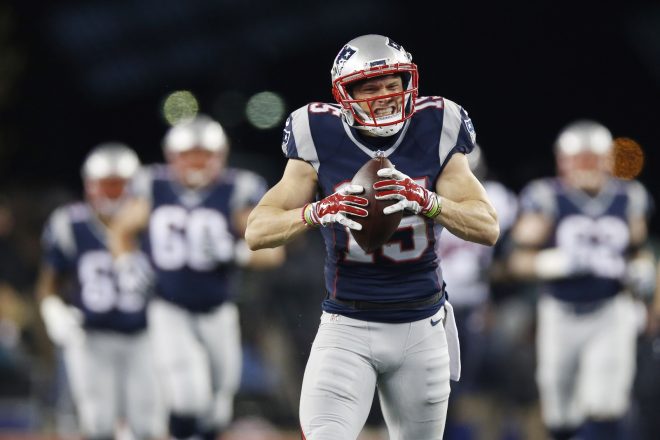 Heading into their matchup in Mexico City with the Oakland Raiders, the Patriots were seeking their eighth win of 2017 and some separation in the AFC East as the final stretch of the season began.

In the first quarter the Patriots owned time of possession early, as Dion Lewis found the end zone to put the team up 7-0 after one.

Quarterback Tom Brady was red hot to open the game, with a perfect 12 for 12 on completions.

TV STAT: Tom Brady last started a regular season game 12/12 against the Colts back in 2003. He just matched that total with that last completion to Bennett.

The defense continued its rebound, as cornerback Duron Harmon kept the Raiders from answering with an interception.

7-0 Patriots after a quarter.

In the second, Brady continued to attack the Raiders secondary as he connected with Brandin Cooks deep to setup the Patriots second touchdown of the game.

On third and goal, the usually clutch Danny Amendola came up big again, and it was 14-0 Patriots midway through the second.

Tony Romo explains Tom Brady's thought process and how he communicates to Danny Amendola before a touchdown pass. pic.twitter.com/UUQOUAbusC

Just before halftime, it appeared the Raiders were going to get back in the game, but the Patriots defense had other ideas in the red zone.

A big stop by the defense.

Hell of a play defense!! #boomtower

Despite under a minute to play in the half, Tom Brady’s offense continued to find ways to swipe points before time ran out. The high altitude of “Estadio Azteca” turned out to be kicker Stephen Gostkowski’s ally.

The #Patriots have now scored in the final minute of the first half in seven straight games. #GoPats

Heading into halftime, the Patriots found themselves up a commanding 3 possession lead at 17-0.

Getting the ball to start the third quarter, Brady again found Cooks deep, a 64 yard bomb to the end zone and a 24-0 lead.

.@brandincooks in three steps:
1. Catch a 64-yard TD.
2. Shoot your arrows.
3. Celebrate with the fambloski. pic.twitter.com/DEobFACHLs

Pretty crazy, but that 64-yarder was only the fifth longest TD catch of Brandin Cooks’ career.

Kicker Stephen Gostkowski continued his big day and kicked two more field goals from 40 and 51 to extend the lead to 30-0 after three quarters.

In the fourth, Brady earned an early exit as Brian Hoyer took over for the remainder of the game. The Raiders would get a garbage time touchdown from Amari Cooper and a two point conversion to spoil the shutout, but Gostkowski’s fourth field goal of the game capped off the blowout 33-8 victory in Mexico.

Patriots clinched a .500 or better record for 17th consecutive season, tying 1957-73 Cleveland Browns for second-longest streak in NFL history, behind only 1965-85 Dallas Cowboys and their 21 consecutive seasons.

This is just the sixth time in franchise history that the #Patriots have held their opponents to 17 points or fewer in six straight games. The franchise record is 9 straight in 1993.

TB12 walks off the field in Mexico City with a W! #GoPats#NEvsOAK pic.twitter.com/YrpY6Uwtf6

#Patriots 5th Quarter on @mytv38 – @RobGronkowski showing off his Spanish after the Pats win #WBZ pic.twitter.com/n6iXuAXlmQ

Bill, we love the hoodie! We know deep down you’re an @usairforce guy. Congrats on the big win! You’re welcome back anytime. #LetsFly https://t.co/oo6daRdYOb

Gracias @nflmx for all the love and support. What an amazing experience! #nothintighterthanaGRONKhug #team #LFG pic.twitter.com/ggFQroKgPM