5 years ago at 8:53 am ET
Follow @IanLogue
Posted Under: Patriots Commentary

Seeing Jimmy Garoppolo during his first press conference in San Francisco on Tuesday was a little ironic, especially given the speculation several years ago about what the future might hold for the end of Tom Brady’s career.

Given how high of a regard Brady holds for his childhood team, some had wondered if the 49ers might have eventually been a potential trade destination in the event Bill Belichick had someday opted to move on from the future Hall of Fame quarterback.  Had the unthinkable happened, playing in his home town to finish his career certainly seemed like a plausible scenario, especially since Brady had previously talked about the fact that it was a possibility since even players like Joe Montana and Peyton Manning didn’t finish their careers with their original team.

Of all the coaches who would be bold enough to make such a decision, Belichick obviously falls into that category and up until Monday night, it was hard for fans not to have had that thought in the back of their minds.  Given Brady’s age and the timing of where Garoppolo was with his contract, it was tough not to wonder if the Patriots might have potentially found themselves facing such a scenario after the season, especially depending on how it ends.  A Super Bowl win and a strong mistake-free playoff performance by Brady could have swayed it one way, a swift playoff exit and some questionable mistakes could have swayed another.

Fortunately, it’s no longer something they’ll need to worry about.  Belichick will now be riding this train with Brady for the foreseeable future and he’ll instead be forced to pray New England’s scouting department can help him find someone of Garoppolo’s caliber to draft in 2018 to replace him and give them someone to groom as they try again to find Brady’s next potential successor. 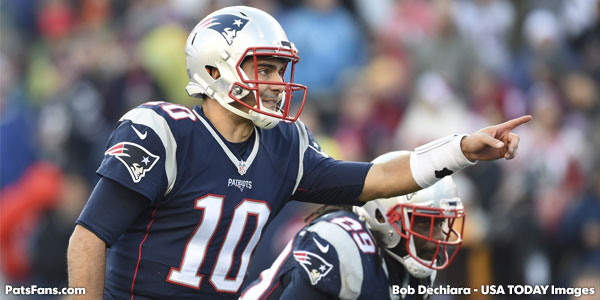 Out of the Patriots’ past back-up quarterbacks, Garoppolo was certainly the strongest of the group.

That in itself seems like a daunting task.  Given the number of quarterbacks who have come and gone in this system, Garoppolo was the only one who far and away looked to be the best of the bunch and he’s also one of the rare players to ever earn the most praise from Belichick.  He even said last November that Garoppolo’s ability to run the offense was nearly on par with Brady.

“We have a good quarterback in Jimmy [Garoppolo] and Jimmy could go out there and run everything that Tom can run,” said Belichick last year. “We’ve seen that. I’m not saying that he’s not capable or qualified to do it. He is. And he does a great job of it. And when we put Jimmy in there, it’s really seamless. You can’t, unless you were actually looking at the position, if you could just block out that position and say which guy was in there at quarterback, I don’t know if you would know a lot of times.”

Those are words not said previously about past players.  He clearly held Garoppolo in high regard but was left with the prospect of potentially losing him after the season without getting proper compensation in return.  History has shown that they feel strongly about that scenario, which explains why we’ve seen players like Lawyer Milloy, Richard Seymour, Jamie Collins and others fall into this category.

On Tuesday, Belichick seemed a little flustered when talking about having traded Garoppolo, saying that the situation had simply reached a point where they were essentially forced to make the move.

“He’s a talented individual, was a great person to coach,” said Belichick during his conference call Tuesday. “I met with him weekly and, again, have a tremendous amount of respect for him. As his career moves forward we have to look to our team, both this year and beyond, and that’s a consideration we have to make.”

With Garoppolo set to be a free agent after this season, Adam Schefter revealed on WEEI’s Kirk and Callahan Tuesday morning that discussions were had during the offseason on an extension but it sounds like the two sides never progressed to the point where the Patriots felt like they’d be able to keep him.  Giving him the franchise designation, along with Brady’s contract, also would have put the team in a financial bind with so much money tied up in the quarterback position, potentially hampering them competing for free agents. 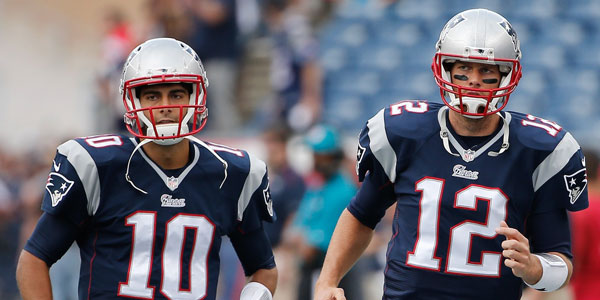 In the end, Belichick said keeping both Garoppolo and Brady just wasn’t an option.

Needless to say, someone had to go, and unfortunately that someone was Garoppolo.  Belichick called the whole situation “complex” and that they kept him here as long as they could before finally coming to the decision.

“We probably had, in my opinion, the best quarterback situation in the league for the last – let’s call it two-and-a-half years,” explained Belichick. “It’s just not sustainable given the way that things are set up. It’s definitely not something that we wanted to walk away from and I felt like we rode it out as long as we could. We over a period of time explored every option possible to try to sustain it, but just at this point felt like we had to make a decision.”

“It’s a very complex situation on multiple levels and this is really the last window that we had and we did what we felt was best for the team.”

Mike Reiss of ESPN reported Monday that former back-up Brian Hoyer is expected to return and that it’s “all but a done deal” for him to come back to the team to back up Brady for the remainder of this season and “maybe even into next year”.

So Garoppolo finally gets his opportunity, the Patriots have a second-round pick they can potentially use to replace him, and it’s Brady and Hoyer to begin the second half of this season.

And so it goes in as another era comes to an end here in New England.  The good news is, the Patriots still have Brady, and they’ll now move on and continue their march to Minneapolis, which will resume in two weeks.

READ NEXT:
Good News For Hogan, But Expected to Be Out “A Few Weeks”
Posted Under: Patriots Commentary