5 years ago at 5:30 am ET
Follow @IanLogue
Posted Under: Uncategorized 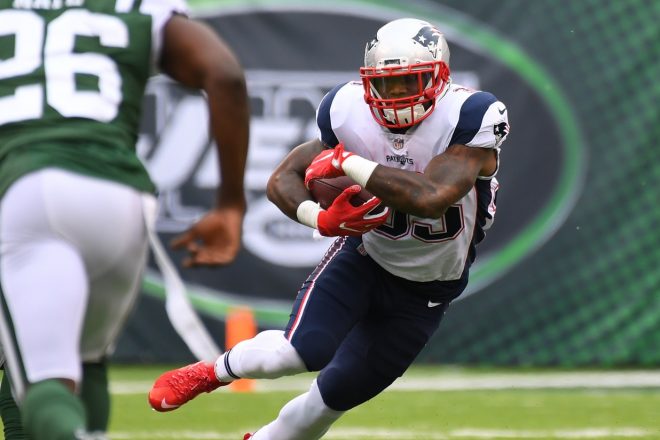 Newcomer Mike Gillislee is still growing in New England’s offense, but he’s got one growing pain that still seemingly remains a challenge for him.

For whatever reason, facing 3rd-and-1 hasn’t quite been an automatic for this group of running backs so far this season, with Gillislee’s name standing out on the stat sheet.

Gillislee has been the running back who has struggled the most this season, with the running back having carried 6 times for 6 -yards on 3rd-and-1, while converting just half of his attempts. The Patriots faced 3rd-and-1 three times on Sunday, with Gillislee’s number being called on two of those attempts.

Gillislee picked up one of them, but he was stopped for no gain on another and it forced them to go for it on fourth down. The good news is, they went back to him on that attempt and thanks to a terrific block by James Develin, Gillislee picked up eight yards on the play.

However, that was only Gillislee’s first successful fourth-down attempt. He had previously been stopped for no gain on two other rushes on 4th-and-1.

Meanwhile, Tom Brady had the other 3rd-and-1 attempt Sunday, picking up two yards to move the chains.

Patriots Carries on 3rd-and-1 Through Week 8:

Overall on 3rd-and-1 this season, he’s been stopped for a loss once, and for no gain twice, making him 3-of-6 on the year.  His carry for a loss came down on the goal line last week against Atlanta.

James White has just one attempt, which was also for no gain.

Patriots Carries From the 1yd Line Through Week 8:

Taking another look where picking up a yard has been an issue, down on the goal line has also been a struggle for Gillislee.  He’s had four total attempts and was stopped for a loss once (his carry last week) and stopped for no gain twice, with one successful carry for a touchdown.  Dion Lewis has one attempt on the goal line, which saw him score against against the Jets.

Through eight games he has 21 carries this season where he’s failed to pick up a yard, with seven carries for a loss and fourteen for no gain.  But that total is out of 98 carries, which to provide some context there, he’s actually gotten better.  Fourteen of those came over the first four games, while only 7 of those have happened in the last four.

For a comparison, here’s a look at the Patriots rushing totals through Week 8 of last season:

LeGarrette Blount, was stopped for a loss or no gain 35 times at this point last season, but he also had 44 carries of at least 1-2 yards, which is significantly higher than Gillislee’s 19. He also had 14 rushes of over 10 yards, which includes two of 20+ and one of over 40. Gillislee has yet to break one off a big run of 20+. Lewis is the only player to do that this season, having gained over 20 on one (a 25-yard gain against Atlanta) and another over 30 (a 31-yard run against the Buccaneers).

But the bigger issue is the situational carries where Gillislee hasn’t quite reached a point where he can be counted on to pick up a yard when the team needs it most.  With the Patriots’ offense still trying to find some consistency thanks to injuries, they’re going to need players to move the chains and to get into the end zone when the opportunity presents itself.

Needless to say, Gillislee obviously factors into that equation and it’s a weakness that hopefully he’ll improve on as he continues establishing his role in New England’s ground game. For now, it remains something to watch over the final half of the season.