5 years ago at 9:51 pm ET
Follow @IanLogue
Posted Under: Uncategorized 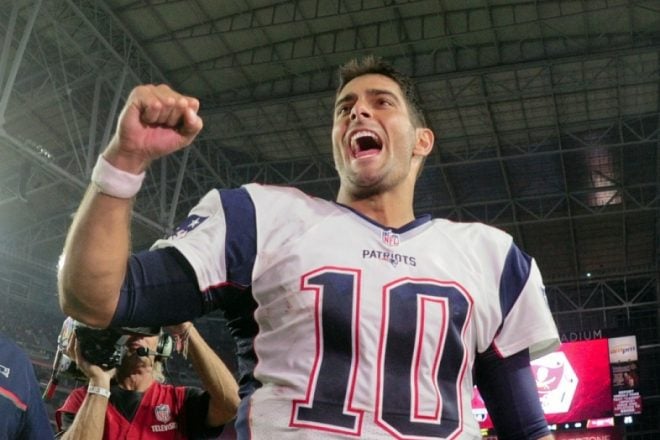 It looks like Jimmy Garoppolo won’t be the future of the Patriots after all.

Bill Belichick made a surprising move on Monday night, with ESPN’s Adam Schefter reporting that the Patriots agreed to a trade with San Francisco ahead of the trade deadline, shipping Garoppolo off to the 49ers.

The Patriots will reportedly receive a second-round pick in 2018 as a result of the deal.

Schefter also reported that part of the decision to move Garoppolo stemmed from the fact the Patriots had been unable to reach an extension with the back-up quarterback, who was set to become a free agent after this season.

What makes this interesting is the fact that thanks to injuries, New England is thin at a variety of positions, which could potentially mean that the pick they acquired for Garoppolo could perhaps be currency to swing a deal with a team to bring in another player.

For Garoppolo, it removes the uncertainty surrounding his future given that Tom Brady has continued to play at a high level and has yet to show any signs of slowing down.  Brady has made it clear he plans on playing until his mid 40s, and so far he hasn’t given anyone a reason to believe that it’s not a realistic goal.  It also reveals how much Belichick believes in his 40-year old signal-caller, especially given that the club has now traded both of his back-ups, leaving them currently without a viable back-up behind him.

Garoppolo now joins Jacoby Brissett as he looks to take advantage of his opportunity to be a starter in the NFL.  Garoppolo completed nearly 70% of his passes in his two outings last season for the Patriots during Brady’s suspension, finishing 43-of-63 for 502-yards and four touchdowns, as well as a QB rating of 113.3.  He’ll now join a 49ers team that is currently 0-8.

San Francisco also released former Patriots quarterback Brian Hoyer on Monday, who after today’s move, may be the player New England looks to in the interim to back-up Brady.

READ NEXT:
INSIDE THE NUMBERS: Garoppolo Finished With a Strong Resume
Posted Under: Uncategorized
Tags: 2017 Patriots Season Jimmy Garoppolo