5 years ago at 10:13 pm ET
Follow @IanLogue
Posted Under: Uncategorized 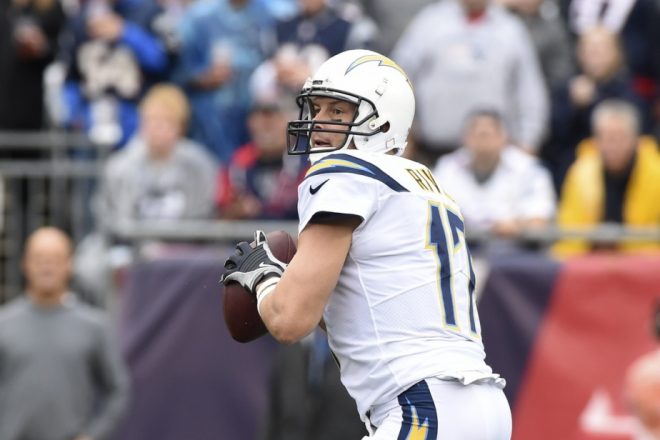 Watching Philip Rivers at the end of Sunday’s game against the Patriots, he seemed pretty excited after getting his team to the line with one second to go in the game, giving him just enough time to spike the ball and set up a potential game-winning play.

The veteran QB raised his hands in the air after he spiked it, seemingly accomplishing a minor victory and he appeared pretty fired up at the opportunity to potentially throw a touchdown pass and steal a win from the Patriots.

But the game ended in frustration for Rivers, who was picked off on his final throw by Patriots defensive back Jonathan Jones, sealing the win for New England.

Although, then again, Rivers is probably used to this feeling by now.  He’s lost every game he’s ever played against Tom Brady, with Sunday’s loss improving the New England veteran to 7-0 all-time in head-to-head match-ups against Rivers, putting him in some rare company in that category.

TSN Sports posted a graphic after the game showing the list of names who have accomplished similar records, which includes the likes of Steve Young and Jim Kelly, who each dominated Jim Everett and Jeff George respectively during their careers.

Tom Brady has had Philip Rivers' number in their head-to-head rivalry. Sunday's win improved Brady to 7-0 vs the #Chargers QB & a spot here pic.twitter.com/aUlJYkHkF7

Two of those wins included two playoff losses over Rivers, with Brady beating them in the AFC Championship game in 2008, as well as in the Divisional round in 2007.

Rivers said after the game that they competed hard and despite the loss, he’s encouraged by what they did against New England Sunday.

“They’ve beaten us just about every time I’ve trotted out there against them,”said Rivers. “They’re sitting there at 6-2 at the top. They’re going to be playing in January, so something you can take from it is, again, there are no participation trophies, but we are right there.”

“We came to their place and we’re right there as a lot of teams have been this year against them and we just didn’t find a way to get it done.”

READ NEXT:
Hogan’s Injury Leaves Patriots In Tough Shape Heading Into the Bye
Posted Under: Uncategorized