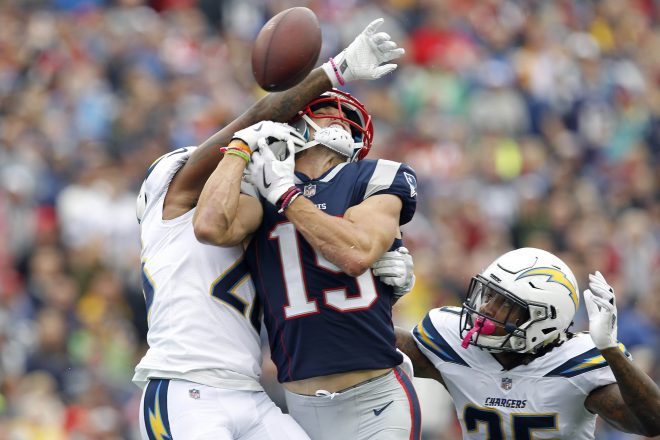 The Patriots offense had a productive afternoon Sunday against the Chargers, but they weren’t quite able to escape unscathed during the win over Los Angeles.

Hogan went down almost immediately, and he stayed down for quite some time before eventually walking off the field under his own power.

However, as Hogan headed to the sideline, his right arm hung down at his side.  He was later spotted in excruciating pain as trainers worked on him before heading to the locker room. Reporters later saw him wearing a sling after the game.

According to ESPN’s Mike Reiss, Hogan will reportedly undergo an MRI on Monday to determine the severity of the injury, but his loss would only further weaken a group that has already been struck down by injury heading into the second half of the season.

As it is, the Patriots are about to embark on a tough road following next weekend’s bye.  They’ll play five of their next six games on the road, which includes a trip to Denver, followed by a stop in Mexico City against the Raiders.  Not having Hogan would certainly be a challenge, especially since the team is already without top target Julian Edelman.  That would leave them with just Brandin Cooks, Danny Amendola and Phillip Dorsett at the wide receiver position.

Needless to say, the Patriots now have reason to be concerned heading into the by week.  While Reiss reports that there is initial optimism on his injury, it doesn’t change the fact if they’re without him for a couple of games, the second half of the season may start off a little rocky.

Hogan finished Sunday’s game with five receptions on seven targets for 60 yards and he’s currently tied for the team lead in touchdowns with Rob Gronkowski with five.