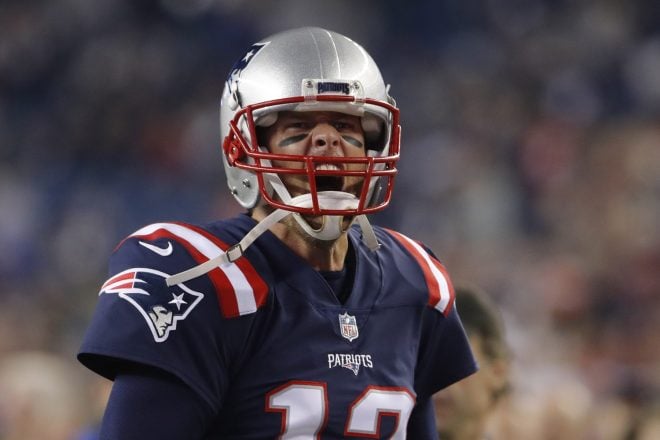 The Patriots improved to 5-2 on the season after their 23-7 win over the Falcons Sunday night, and there are plenty of reasons to be feeling pretty good about this one.

Here’s a quick rundown with some thoughts about how this one unfolded as New England went out and made quite a statement in one of their best wins of the year thus far.

1) The Streak is Over – After allowing 300-yard passing performances to every quarterback they had faced this season, New England’s defense shut down Matt Ryan and didn’t allow him to reach that milestone.  Ryan finished the night 23-of-33 for 233 yards and just one touchdown, which came with 4:13 to go in the contest.

The Patriots did everything right, frustrating Ryan and holding Atlanta to just 2-of-9 on third down, as well as 1-for-3 on fourth down.  This one went about as well as they could have hoped, with the defense stalling drives and keeping Atlanta out of the end zone, while also winning the time of possession battle after keeping the football for 34:05, compared to just 25:55, including closing the game out with two key first downs over the final four minutes of play.

Given the weapons Atlanta had and the expectations coming into this game, it was impressive to see how well New England’s defense was able to maintain control of the game throughout while neutralizing every threat.  Which brings us to our next point…

2) The Patriots defense put up their best performance of 2017 – One of the biggest concerns Sunday night was how New England’s defense would deal with the speed and weapons in the Falcons’ offense, but Bill Belichick’s group easily handled nearly everything Atlanta threw at them.  Players were swarming to the football and one of the biggest keys of the game was the fact that they stepped up in a big way down in the red zone, holding Atlanta to just 1-of-4 down in scoring territory.  They also blocked a field goal and forced a 4th down stop, which tore the heart out of a Falcons team that seemingly fell apart and never did anything to threaten the Patriots in this game.  The tackling was tremendous and they came up with timely plays, including a timely sack by Adam Butler that helped the Patriots keep the momentum as they built a lead that the Falcons never recovered from.  All of this was a terrific sign as they finally looked like some of the better groups we’ve seen in past seasons, while taking shape with both Eric Rowe and Stephon Gilmore still both sidelined.  That speaks volumes about the progress they’ve made, and should have most fans feeling good about the direction they’re heading in. 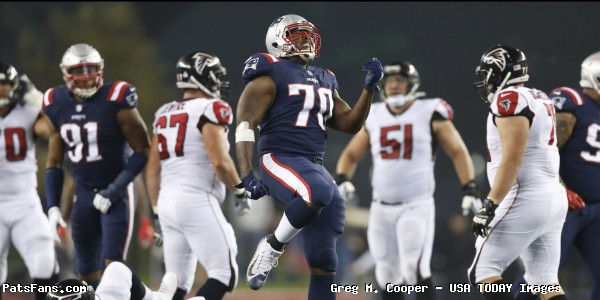 The defense had a great night.

3) Gronkowski was clearly a difference maker – Missing from February’s match-up was tight end Rob Gronkowski, who played well in Sunday night’s game and finished with three receptions for 51 yards, with two of his receptions coming on third down and moving the chains.  His presence on the field made such a big difference, opening up some key opportunities on several occasions when the Patriots found themselves in long-yardage situations following some untimely penalties.  There was also a fun moment Sunday night when Brady hit Brandin Cooks down in the red zone on a short pass, with Cooks following Gronkowski all the way into the end one as the tight end easily cleared the way for Cooks to score.  Plays like that are likely what endears him so much to the coaching staff, who has mentioned on more than one occasion what an absolutely complete player he is.  And the best part?  He absolutely loves doing it.

Meanwhile, one frustrating aspect that still remains is the fact he’s clearly being targeted for offensive pass interference, which is staggering given that opposing players seem to be receiving an insane amount of leeway when it comes to contact down the field that isn’t drawing the same scrutiny.  He was called more than once for it again Sunday night and there was reason to feel there’s something odd about how it continues to be called. It remains an issue, and it’s curious to say the least. 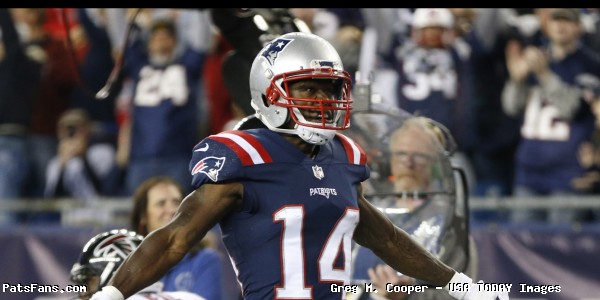 Brady and the offense had a great night.

4) There was no way Brady was going to lose with his family in the house – During the pregame ceremonies, Tom Brady’s mother was among those recognized as cancer survivors and you could just tell that there was something special set to happen.  He was sharp from the beginning, despite the fact the Falcons did a good job getting to Brady early in the game. They did manage to hit him and seemingly forced a turnover, with Brady making one of the worst decisions we’ve seen him make all year in the second quarter after rolling right to avoid pressure and throwing back across his body to a double-covered Philip Dorsett in the end zone, with Robert Alford picking him off for the second time in as many meetings.  Alford had the pick-six in the Super Bowl but Sunday night, Brady caught a break after he took a big enough shot where it drew a roughing the passer penalty on the play, negating the turnover.  One of the more enjoyable parts of that sequence was the terrific tackle by Gronkowski, who wrapped up Alford on the return and stopped him dead in his tracks, and then threw him to the ground.  Two plays later, Brady found Brandin Cooks for the previously mentioned 11-yard touchdown, putting New England up 7-0 and getting the scoring started.  That would be Brady’s only mistake of the evening, as he missed just eight passes all night during the win. 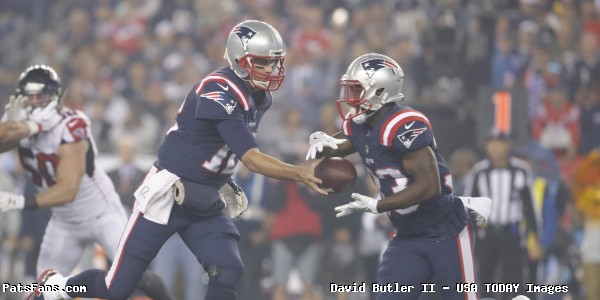 Dion Lewis had his best game yet.

5) Dion Lewis looked as good as we’ve seen him so far this season – Lewis has looked great in recent weeks but Sunday night was arguably one of his best games yet.  He carried the football 13 times for 76 yards but one of the biggest things that really stood out was the incredible amount of power he ran with, with several runs driving defenders backwards as he finished the play.  Obviously most people know him for his shiftiness and his terrific ability to change direction, but he’s been a more complete back this year and seems like he’s really settling back into form.  With such a deep group of running backs, they’ve done a good job of spreading out the workload and if this is any indication of what’s to come from Lewis, it should be fun to see where he’s at by the end of the season and hopefully in the playoffs. 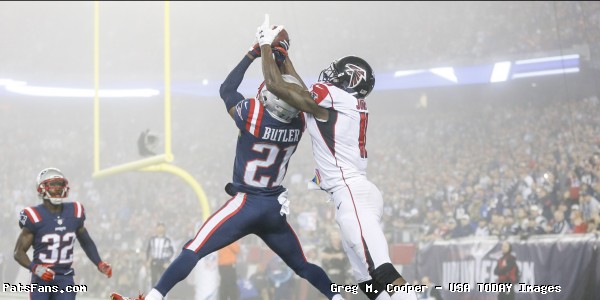 Butler might not have won every battle, but he won most of them.

6) Malcolm Butler finally looks like himself again – With both Rowe and Gilmore sidelined, Butler took center stage in this match-up and this was far and away his best performance of the season.  He was in on quite a few plays where he contested throws, made terrific open-field tackles, and even a play where he lost, he still looked like a winner.  The latter play we’re referring to was the 1-yard touchdown pass to Julio Jones near the end of the game, which saw Butler leap high into the air as he went up with both hands after it seemingly looked like he might pick it off, only to have Jones rip it away for the touchdown.  While Jones ultimately won the play, it didn’t change the fact that Butler didn’t make it easy on him and it was a symbol of a night where while Jones might have scored, the veteran defensive back ultimately made more plays than the Falcons tight end and that’s why Atlanta found themselves at the wrong end on the scoreboard.

7) Hard Not to Root For Nate Solder – While the veteran offensive tackle hasn’t looked like himself at times this season, it sounds like there might be a reason why he might be a little distracted.  During the broadcast, it was revealed that Solder’s son Hudson is still dealing with a rare form of pediatric kidney cancer as he was also seen with Solder’s wife before the game during the ceremony, with the little boy wearing the same look of focus and determination we’ve seen his dad have on the field.  Seeing that knowing that someone so young is going to once again be dealing with chemotherapy is enough to put a knot in the stomach of anyone who can’t even begin to imagine seeing their own child have to go through that.  Meanwhile, somehow Solder continues to mentally deal with that in addition to protecting Tom Brady’s blindside.  It speaks volumes about him as a player and a person, and it should certainly be something to keep in our thoughts moving forward as it appears his son clearly isn’t quite out of the woods yet with his treatments.

8) What a game for Van Noy and Bademosi – Two players that joined Malcolm Butler by having a great night were Kyle Van Noy and Johnson Bademosi.  Both players finished the night as the team’s leading tacklers and the two made some terrific plays.  Van Noy’s best play of the night was the tackle he made on 4th down when the Falcons were knocking at the door at the one yard line trailing 20-0 in the 4th quarter.  But Van Noy read the run by Taylor Gabriel perfectly, tracking him down before coming up to make the tackle, dropping him for a 5-yard loss and turning the ball over on downs.

As for Bademosi, he’s exceeded expectations and seems to be getting better every week.  This is something we see more or less every season, with a player growing week after week and then becoming a big factor down the stretch.  While we’re only seven weeks in, if he keeps getting better, it’s going to be interesting to see how the secondary evolves should Bademosi continue playing at a high level.

Overall, it was far and away the most complete performance we’ve seen all season.  With the Chargers set to visit next Sunday, it’s an opportunity for the Patriots to hopefully build on this momentum with one more home game before they begin a stretch that will see them play five of their next six games on the road.

Either way, it was another good step forward and hopefully it will be one of many heading into the final half of the season.

READ NEXT:
Unlike the Falcons, The Patriots Know How To Close Opponents Out
Posted Under: 2017 Patriots Season