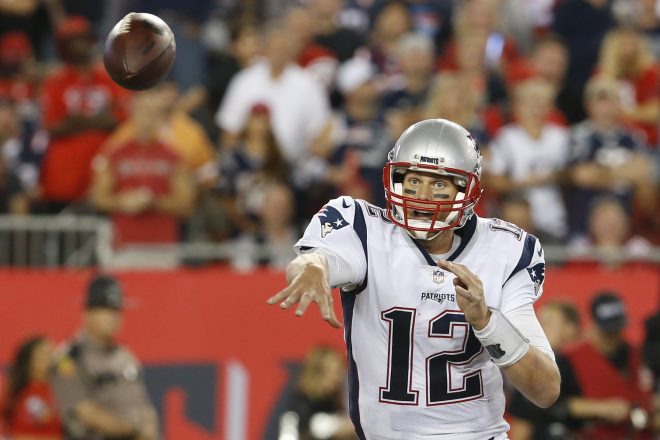 New England improved to 3-2 on the season thanks to a 19-14 win over the Buccaneers on Thursday night.  While it wasn’t perfect, Bill Belichick’s club did enough to get a tough win on the road and we saw some improvements in a variety of areas.  Here are a few thoughts on the victory.

1) It was still an ugly win with still too many miscues – From Tom Brady’s opening drive interception to all of the untimely penalties, Bill Belichick will likely come out of this game happy with the win, but frustrated by the lack of discipline and poor execution.  The number of penalties was staggering, with his team committing 12 penalties for 108  yards, but the most irritating part of that total wasn’t so much the number as it was the timing.  There were several occasions where a miscue happened in a critical moment, including one of the more egregious penalties of the night coming on a 3rd-and-20 when Deatrich Wise made an untimely illegal use of hands penalty as he was coming off the edge against Winston.  Instead of an incompletion and another punt, the Buccaneers got new life and scored a touchdown.

The other sequence that was ugly happened in the closing minutes of the second quarter.  With the ball at their own 22-yard line and only 0:35 left to play, the Buccaneers seemingly had too little time to put up points before the half.  However, both Wise and Cassius Marsh committed back-to-back “roughing the passer” penalties during the drive, which helped the Buccaneers get into position to attempt a 56-yard field goal.  Thankfully Nick Folk missed what was one of three misses on the evening, but as we saw last week against Carolina, they’re not going to be that fortunate every week.

2) Brady took some serious punishment – Some of the noticeable issues that have seemingly resulted thanks to the the loss of Julian Edelman is how much longer Tom Brady is being forced to hold onto the football.  That additional time is clearly taking its toll, with Brady absorbing some of the most brutal hits we’ve seen him take in quite a while.  Brady was sacked twice during the game, with the stat sheet also showing he had been hit six times, although it certainly felt like more.

One of the hits he took early in the game saw his head driven to the ground with an arm around his neck, leaving him flexing his neck after he managed to get back up while obviously looking uncomfortable after the play.  Overall he took some serious punishment, needing to be helped up a few times after some of the crushing blows he absorbed. He also took another one late in the third quarter after the Patriots moved into Buccaneers territory when he was blindsided on a sack that saw him fumble away the football.

It’s been an ugly start given the fact so far Brady has been sacked 16 times in 2017, having already eclipsed the 15 he endured in all 12 games during the entire 2016 regular season.  The club has been fortunate that he’s managed to battle through it, but it should certainly be an area of emphasis moving forward for an offensive line that has had a tough stretch keeping the veteran upright.

3) Despite Gronk’s Absence, Hogan and Amendola carried the load – With Rob Gronkowski out of the line-up due to a thigh injury, it was Chris Hogan and Danny Amendola who stepped up during most of the key moments on Thursday night and were critical in the team moving the chains. The two combined for 10 of the 15 passing first downs Brady had Thursday night, with Amendola being Brady’s most reliable target after the veteran QB finished a perfect 8-of-8 for 77 yards targeting the receiver.   From there it was James White (7 catches, 57 yards) and Brandin Cooks (5 catches, 85 yards)  who rounded out a performance that certainly wasn’t perfect after their 19-point output.  Brady likely knows they left plenty of points on the board (they were just 1-of-3 in red zone efficiency), but thankfully, they did enough to get the win. 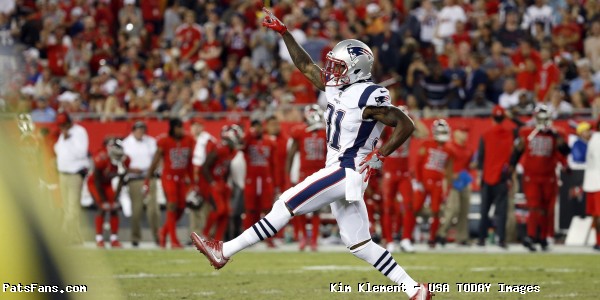 
4) The defense finally had a better night – One of the stats that got lost for most of the night was the fact that the Patriots defense held the Buccaneers to seven straight failed third down attempts, with Jamis Winston and the offense not getting their first third down conversion until there was just over 3-minutes to go in the third quarter.

Things looked much better in the secondary, with Patrick Chung standing out after finishing with a game-leading 3 passes defensed, while Malcolm Butler (1), Jonathan Jones (1) and Duron Harmon (1) accounted for the other two.  Jones got his on the final play of the game as Winston tried in vain to throw a last minute touchdown, but Jones made a leaping deflection to close this one out.  Unfortunately he didn’t get his name mentioned on television after the game as the CBS post game crew gave it to “Cyrus Jones”, who is obviously on injured reserve and didn’t play.

Meanwhile, veteran safety Devin McCourty had a great game and was everywhere, finishing the night with a team-best 11 tackles and McCourty certainly stepped up on a night where they needed someone to set the tone and help spark their much-needed turnaround.  Overall, it was obviously not perfect, but it’s definitely a step in the right direction.

5) Terrific performance by Stephen Gostkowski – Despite his struggles,  the veteran kicker is now 12-for-12 through five games, including hitting all four of his attempts on Thursday night.

Two of those kicks certainly weren’t easy, with Gostkowski hitting a 45-yard kick early in the 3rd quarter that put them up 16-7, while later hitting a critical 48-yard field goal with just over a minute to go that ended up being the difference in the game given that it put the Buccaneers in a position where they needed a touchdown at the end of regulation to try and win it.

He’s taken plenty of criticism but he’s remained steady and seems like he’s gaining confidence.  After seeing Nick Folk miss all three field goals, it shows you just how fortunate the Patriots are to not have a similar problem like that of their own at that position.

6)  Aside from the interception, it was a strong performance by Brady, and he reached another milestone – Tom Brady finished the evening 30-of-40 for 303 yards along with a touchdown and his interception, but he was fairly sharp after a tough start and played really well in a hostile environment.

The veteran quarterback finished with a perfect 10-for-10 performance in the second quarter, which ended up being one of the big keys to the game given that the 10-points they put up over that span ultimately ended up being the difference in the game.

The more amazing part of this is the fact that Brady did it all while being beaten up all night, yet somehow he managed to still remain accurate throwing the football and it ended up being just enough to help them get above the .500 and improve to 3-2 on the season.

He also got his 186th regular season victory, tying him with Brett Favre and Peyton Manning for the most all-time in the NFL.  His next one will set the record, and one would certainly have to believe that he’ll have no issue passing that total and putting this one further out of reach for future NFL quarterbacks.

The Patriots will now have a long break before they travel to New Jersey to take on the Jets on October 15th.

READ NEXT:
Patriots Survive Both Short Week And Buccaneers
Posted Under: 2017 Patriots Season