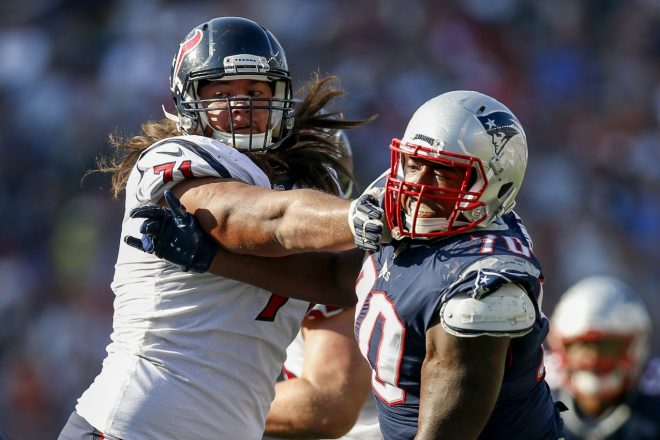 The Westgate Las Vegas Superbook published their latest NFL Advanced Betting Lines on Tuesday. These early odds are posted prior to the following week’s games. Also known as Look-Ahead lines, they give the adventurous sports fan an opportunity to wager on games up to twelve days away. If you are in Vegas and have a good feeling about a matchup further down the road, it is a chance to get a jump on odds that could be less favorable after this week’s games.

Week five kicks off with a highly unusual occurrence: a great Thursday night matchup. The New England Patriots travel to Tampa Bay for Tom Brady’s first-ever regular season game on Dale Mabry Highway. It has been twenty years since the last time the Pats played in Tampa: at that point their ‘franchise’ quarterback was Trent Dilfer. Still donning creamsicle uniforms and a winking pirate, that was the Bucs first winning season in sixteen years. Led by Derrick Brooks, John Lynch, Warren Sapp and Brad Culpepper, the Buc defense dominated that day for a 27-7 victory. The Patriots have won the last three meetings between these two clubs, including a Tampa ‘home’ game in London in 2009. New England has outscored the Bucs in those three games – the only times Tom Brady has faced the Pewter Pirates – by a cumulative score of 86-10.

The Bucs have been hit hard by the injury bug early this season. Two of their best players, linebackers LaVonte David and Kwon Alexander, are not expected to play in week four against the Giants. Safety TJ Ward has not practiced all week due to a hip injury and is also unlikely to suit up. Four other players on defense (corner Brent Grimes and linemen Gerald McCoy, Robert Ayers and Noah Spence) are all questionable, but expected to play. The net result last week was Buc fans seeing the back of jersey number 29 (CB Ryan Smith) far too often. Collectively the Buccaneer defense made a backup QB look like an All Pro. Case Keenum completed 76% of his passes for 369 yards, three touchdowns and no picks as Minnesota handled Tampa Bay easily in a 34-17 victory.

The early games a week from Sunday are littered with a lot of garbage: Bills-Bengals, Jets-Browns, Niners-Colts, Chargers-Giants. Carolina at Detroit is probably the only early game worth watching. The lineup does improve in the late afternoon with Baltimore at Oakland and Green Bay at Dallas.