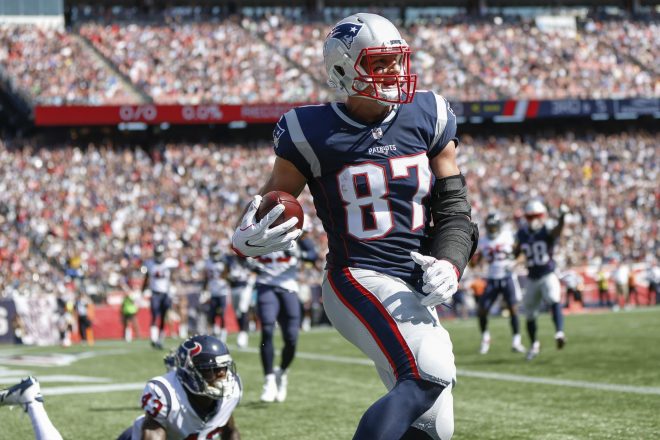 Heading into Sunday’s 2016 playoffs rematch with the Houston Texans, the New England Patriots were seeking to jump above .500 for the first time in 2017.

Coming into the game, head coach Bill Belichick boasted a 8-0 record at home against rookie quarterbacks in his coaching career as 22 year old Deshaun Watson got the start under center for the Texans.

Here's a better shot of the Patriots' kneeling for the anthem, from the Globe's Jim Davis pic.twitter.com/CsoNChlbYP

In the first quarter, the Patriots offense clicked early as Brady got into rhythm with Brandin Cooks, it was a sign of things to come.

The first quarter saw the Patriots and Texans score a touchdown each, with tight end Rob Gronkowski opening the scoring and a Stephen Gostkowski field goal to take a 10-7 lead after one.

In the second quarter, Brady found Chris Hogan aka “7-Eleven” in the corner of the end zone to regain the lead at 14-10 following a Texans field goal that tied the game early in the quarter.

Midway through the second quarter, after another field goal to cut the deficit to 14-13, the Texans vaunted defensive duo of Jadeveon Clowney and JJ Watt attacked the Patriots offensive line, forcing a Brady fumble that was recovered and returned for a 22 yard touchdown by Clowney. Texans 20 Patriots 14.

Clowney with the pick 6 #BigGuy touchdown with the Gronk spike pic.twitter.com/tTHBuDfkfS

Needing a response, Brady found Hogan again, this time on a 47 yard strike for the touchdown to regain the lead at 21-20 going into halftime.

Raymond Clayborn inducted into #Patriots HOF in July, lost everything he owned during Hurricane Harvey and received new jacket at halftime pic.twitter.com/jfZApCoTlW

Getting the ball to start the second half, the Patriots wasted no time extending their lead with Cooks again finding the end zone, this time on a 42 yard pass from Brady. 28-20 Patriots.

PHOTO: Patriots WR Brandin Cooks with a terrific first half catch against the Texans on Sunday. (Terrific Photo by @gmcphoto) pic.twitter.com/C0LN7wcQ6l

The Texans refused to back down, as Deshaun Watson played like a seasoned veteran, a 10 play 70 yard drive culminated in a 12 yard pass to Ryan Griffin to get the score back within one at 28-27 to end the third quarter.

Gronk continued to have a very productive game following his injury scare a week ago, eight receptions for 89 yards and a touchdown on Sunday including this connection from Tom Brady late in the third.

Flipping out over this Brady ➡ Gronk connection. pic.twitter.com/BWuoRx7otx

In the fourth quarter, the Texans clawed back to take the lead and extend it to five following back to back field goals by rookie kicker Ka’imi Fairbairn. With under three minutes to go in the game, the Patriots needed to put together another game winning drive down 33-28.

The comeback was 🔥.
So was the pep talk. #GoPats pic.twitter.com/kIPY5N490z

The Patriots converted two third and long conversions, including this clutch grab by Danny Amendola on a third and 18.

The play before the play.

Down to 33 seconds remaining in the game, Brady found Cooks for a 25 yard go ahead score adding yet another come from behind victory to Brady’s incredible resume.

That was Brady's 5th TD of the day, his 6th career game with 5+ TDs, ties Dan Marino for 3rd most all time.

A dejected JJ Watt. Brady gets him again pic.twitter.com/MFnlYtMbXV

This is the 8th regular season game in which Brady threw a game-winning TD in the final minute to turn a #Patriots deficit into a win.

Wow what a game! Super Solid team win vs a really good team.That was some great football to watch fellows!

Great team win yesterday! Chase and Parker's first football game was an exciting one! Never thought I would have the chance to play in front of my own kids! Love these three very much #parker #chase #Patriots #family #squad @ashleyboccio