Good morning and welcome to your Sunday Patriots news 9-3 and AFC East notes.  One of the more interesting notes from Saturday was that the Patriots were waiting until after their scheduled 12:15 p.m. practice to make their final cuts. It isn’t like they didn’t already know who is going to make or not make the team. It does seem odd with their timing of things. I’d love to find out their reasoning behind it, although we never may.

Quick Analysis on the Four Trades this Weekend:

The Patriots made four moves over the period between Friday and Saturday by the time of the initial 53-man roster cut-down.

Overall all of the trades worked out for the Patriots and the teams they dealt with. Seeing reports that the Pats “fleeced” the Colts is hogwash. The Colts were reportedly taking offers for Dorsett this week and with Andrew Luck not yet ready for action, they were in need of another QB. Brissett’s sharp performance on Thursday night must have been the deciding factor. Will all of these moves work out? Time will tell but overall the moves make sense for both teams across the board.

While the Patriots have made their initial cuts to get down to the 53-man roster limit, don’t get too wrapped up in who is here, especially at the bottom end of the roster.

If Bill Belichick and the staff have shown anything in the past several years it is that the roster will change, sometimes a lot in the early days of the season. I would expect the team to tweak the roster quite a bit in the next two weeks as we’ll see the coaches tinker with and find the players who best fit what they’re trying to do.

Then, as we’ve usually seen, the team will make a deal or two in-season to fill a need or to bolster the team’s depth. And as with the practice squad, which will be announced later today, this unit will see plenty of faces. So, don’t get too worked up over the roster construction, as it is currently constructed. There will be more changes coming.

Belichick Waxes Long on the Differences Between KRs/PRs:

There are times when Bill Belichick’s press conferences become “must-see” and great learning tools for the media and fans (live cast on Patriots.com). Whenever he’s talking about football history is always a perfect example. I was fortunate enough to be in attendance at one last year when he spoke at length about forming a practice squad. On Friday, he was at it again when asked if a punt returner, as in a player who might not contribute much offensively or defensively, was worthy of a roster spot. His answer, long and articulate is the kind of stuff that makes his Friday pressers those must-attend events.

“I mean I’d say the ball-handling is critical,” Belichick said. “It’s like the long-snapper. How many plays is a long-snapper in for a game? Call it 10? I don’t know. Somewhere in that neighborhood. Eight to 10 extra-points, punts, field goals. But everybody carries a long-snapper.

“Of course the easy answer is if one person does both, that makes it a lot easier, and it also makes the overall roster discussion a lot easier,” Belichick stated. “The big difference, of course, is on kickoff returns you have a chance to build up your speed. You get a chance to handle the ball cleanly, and there’s nobody on top of you when you’re catching it. You’re able to run and set up your blocks and hit things full-speed . . . usually between the 20 and 30-yard line, where the coverage and the blockers and the wedge all sort of come together and the returners get a chance to set those blocks up and hit them and try to get through there. 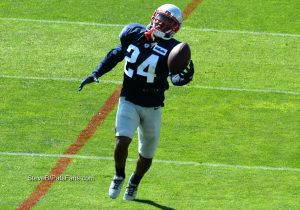 The Patriots are looking for a punt returner now that Cyrus Jones has gone on IR. (SBalestrieri photo)

“Between the kick-returns and the punt-returns, maybe a couple less than that. But I’d say the difficulty of those jobs and the importance of them and core ball-handling, there’s not much of a way to lose a game quicker than that. I think it’s a high priority for everybody. When I say everybody, I say every team . . . We’ll have to see how it turns out, but it’s not an afterthought at all. It’s a priority.”

“The punting game is a lot more situational. Mostly on kickoffs, the ball’s always kicked from the same place. Rarely is there a difference; there are some, but they’re minimal — after a safety or that type of thing. But punting, the ball can be anywhere. The situation that they’re punting in can be quite diverse and sometimes complex. Punters are very good at directional punting and kicking different types of punts — end-over-end punts, spiral punts, spirals that don’t turn over and so forth. The ball-handling is a little more complex.

“And then in addition to that, you’re dealing with defenders and coverage players that are on you a lot quicker on punt returns. Sometimes you only have a yard or two, or a couple yards, to get into space, make a guy miss, break a tackle, whereas kickoffs are much more of a build-up play. Because they’re so different a lot of times you don’t have the same player doing both.

“And on a personal opinion, because they’re so different, I find the two plays very fascinating and intriguing and a great part of the strategy of football. Just because the plays themselves are so different in the teaching… the rules, the skills and so forth. So that’s why I’m not in favor of . . . I take an opposing view to the people that want to eliminate kickoffs from the game and try to have as few kickoffs as possible. I think it’s an exciting play. It’s a unique play and one that is a big momentum play because of what happened the play before — the score or possibly the times at the start of the half where it’s kind of a tone-setter or a pace-setter for that opening play.

“So yeah they’re plenty different. And of course the same thing in the blocking. You have a chance to set up a return (on kickoffs), whereas on the punting side of it you have an option of trying to pressure the punter and block it or return it, but you kind of have to return it from the line of scrimmage. You can’t drop off too far because of the possibilities of fakes. So you have to keep enough guys up on the line of scrimmage to ensure that that ball is punted. And you have to ensure you’re not getting an onside kick, too, but again, that’s much less frequent and the rules are in the kick-return team’s favor on the onsides kick. It’s a big gamble for the kicking team to do that as a surprise tactic. So the blocking patterns and techniques of blocking are quite different on the punt returns compared to what they are on kickoff returns.” Mic drop. 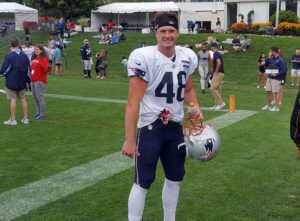 Jacob Hollister was a surprise UDFA who made the initial 53-man roster out of preseason. (SBalestrieri photo)

One of the good stories this spring was the Patriots signing of twin brothers Jacob and Cody Hollister as UDFAs.  And the news that Hollister at least initially made the roster was exciting news. He’s one of a few UDFAs that made the team along with Adam Butler, Harvey Langi, and Cole Croston. However, his brother Cody was released but may be brought back onto the practice squad if he clears waivers.

Hollister was (again in our opinion) the better option in the passing game than James O’Shaughnessy. He’s able to stretch the field, has good hands and has shown the ability to hold onto the ball. He’s more of a move tight-end and still needs some work on his blocking. But he got some good STs work in as well this summer. We liked him as soon as they signed him with his work in college and got to do one of his first interviews during training camp. Which can be revisited here:

Clay will be expected to be a vertical threat for the Bills offense this season and will be called on to return kicks as well. He played for the Ravens in 2015 before getting injured and going on IR. He was out of football before signing with the Panthers this spring.

McDonald signed a one-year deal with Miami in the spring despite being hit with an eight-game suspension for violating the NFL substance abuse policy. The suspension begins this week.

Kearse has always been very productive but is coming off of a down year in 2016 when he logged only 41 catches for 510 yards and one touchdown. The Jets will obviously be expecting much more.

Richardson, 26, has spent his entire career with the Jets. The former Defensive Rookie of the Year made the Pro Bowl in 2014.But his maturity has been called into question several times and he’s been suspended by the league twice.