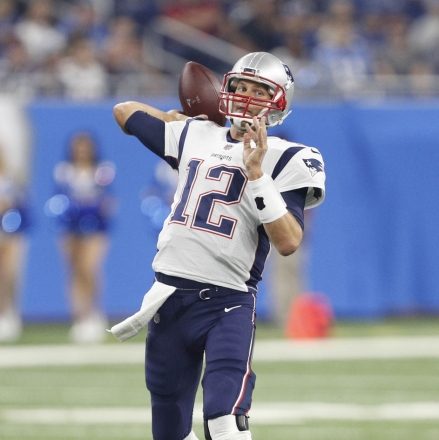 Friday night was a nice breakout performance by the first-team offense, who ran up a 24-0 edge over the Lions in dominant fashion. From there, they turned things back over to the second and third string players who managed just two field goals for the remainder of the game. Fortunately, it was enough for the Patriots to win their first preseason game of 2017 as they beat the Lions 30-28.

Unfortunately, those bright spots were overshadowed by Julian Edelman’s knee injury, with multiple reports stating he suffered a torn ACL in the first quarter following his third reception of the game. It’s hard to pull much positive out of the contest given the gravity of that potential loss, but here’s a list of some positives from players we came away with, which actually includes eight things instead of the seven listed in the title.

1) Tom Brady was sharp Friday night – The veteran quarterback played well and had the team rolling early as they jumped out to a 24-0 edge. He moved the club up the field with tremendous precision, going to the no-huddle on several occasions after New England’s offense had made big plays and kept the pressure on Detroit’s defense. Brady wasn’t perfect, as he had one mistake on the night on an interception that was aided by the fact Chris Hogan quit on his route because he was double-covered, leading to an easy turnover for the Lions. However, considering the lead they had and the fact it was a preseason game, it’s safe to say that it’s probably not a a throw Brady attempts in the regular season.

2) Chris Hogan looks as dynamic as he was in 2016 – Hogan had a terrific night, scoring two touchdowns during his time on the field as he finished with 4 receptions for 70 yards, including a quick 32-yard touchdown strike following a turnover by the Lions on Detroit’s opening drive. 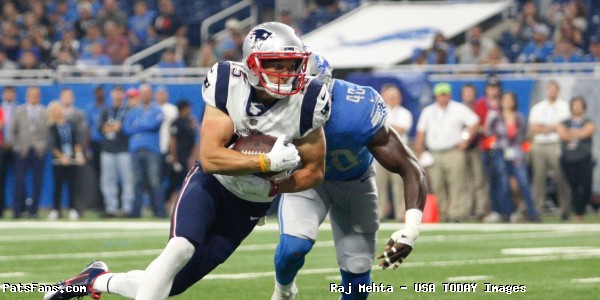 
But the biggest things that stood out were Hogan’s speed and quickness, including one play where he made a tremendous move as he came back on a route toward the sideline and made a great catch as Brady was being flushed out of the pocket. Keeping him healthy will now be even more important, especially with the club’s most productive receiver now likely seeing his season in doubt.

3) Danny Amendola’s roster spot likely a little more secure – Given the amount of opportunity being allotted to Cyrus Jones in the return game, it’s hard not to wonder if given the logjam at the receiver position if Amendola’s future might have been in doubt.

With Jones potentially taking over that role, it might have left Amendola becoming a victim of a numbers game now that it seems the Patriots are starting to shift toward younger players at that position. But given his clutch postseason play, Amendola is arguably the secret weapon that helped this team win both of their Super Bowl in the last three years and it would certainly have been an incredibly difficult decision had the team opted to
part ways. 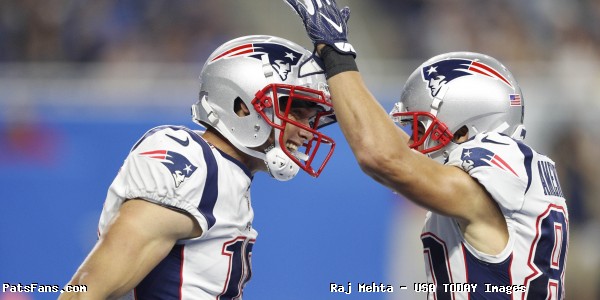 With Edelman’s loss, Amendola likely joins Hogan as two of the focal points of the offense for 2017. (USA TODAY Images)


However, Edelman’s loss might have secured a roster spot for the veteran wideout for at least another year. He reminded everyone last night of what he’s capable of as he showed up in a big way, making a big grab during the team’s third scoring drive, hauling in a 31-yard reception that helped set up Mike Gillislee’s touchdown run.

4) Mike Gillislee Made Some Noise Friday Night – Fans finally got to catch a glimpse of newcomer Mike Gillislee in game action, and he didn’t disappoint. He scored a touchdown on his first ever carry as a Patriot, taking it in from 1-yard out on the team’s third possession to help put them up 21-0. He also made another big run when the Patriots were deep in their own end at their own 9yd line, and had a 27-yard carry that helped get them almost out to the 40-yard line. Overall he finished the night with 8 carries for 38-yards, as well as his touchdown.

5) Alan Branch was dominant on defense – Branch stood out Friday night, having his way up front and
is looking dominant early in the preseason. One of the most impressive plays he made came early in the third quarter when he sacked Matthew Stafford on Detroit’s opening drive to start the second half, bringing him down with just one arm. That was certainly one of the more memorable plays, and a reminder of what an asset he is on the defensive line.

6) David Harris Showed Some Flashes Defensively – The veteran linebacker looked like a defensive back last night in coverage, showing some terrific speed, including a nice play on a 2nd-and-8 where he broke up a pass to tight end Michael Roberts coming across the middle. Harris lead the team with five tackles and seems like he’s continuing to become more comfortable in this defense. 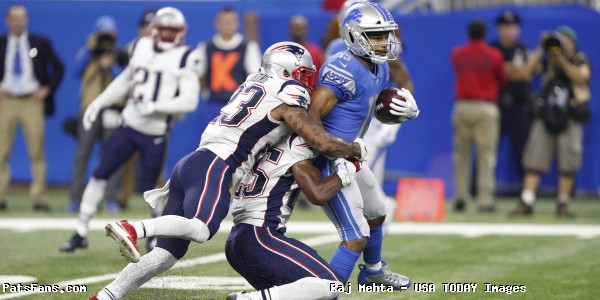 Chung was crushing people all night during the Patriots’ win. (USA TODAY Images)


7) Patrick Chung looks terrific so far – Chung has had a great preseason and he had another great night Friday in Detroit. The veteran absolutely leveled a player on a kickoff return, helping continue setting the tone after the Patriots were already up 24-0 with just over a minute to go in the first quarter. He also made several other big hits, proving that while it might just be preseason, he’s not taking it easy on anyone. 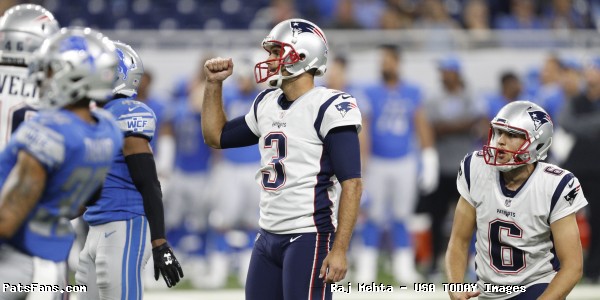 Gostkowski was a perfect 3-of-3 kicking field goals including the game-winner Friday night. (USA TODAY Images)


8) Stephen Gostkowski looks like he’s gaining confidence – After badly hitting a long field goal attempt earlier in the preseason, Gostkowski seems like he’s finally starting to settle in a little more. While he missed an extra point Friday night, he was perfect on all of his field goal attempts, including the 45yd one he hit with the game on the line at the end. It’s just the kind of game to build off of, and it’s great to see the veteran start building some momentum heading toward the regular season.

All-in-all it was one of the best showings we’ve seen so far and it was great to see them get into the win column. Edelman’s loss certainly puts a damper on things, but if there’s anything positive to take away, it’s at least better that it happened now since they’ll have more time to figure out how to adjust, rather than mid-season when the club’s options would have been more limited.

They’ll now return home to get ready to take on the Giants next week in the preseason finale next Thursday night at Gillette Stadium.

How Was This Article?
Posted Under: 2017 Patriots PreSeason