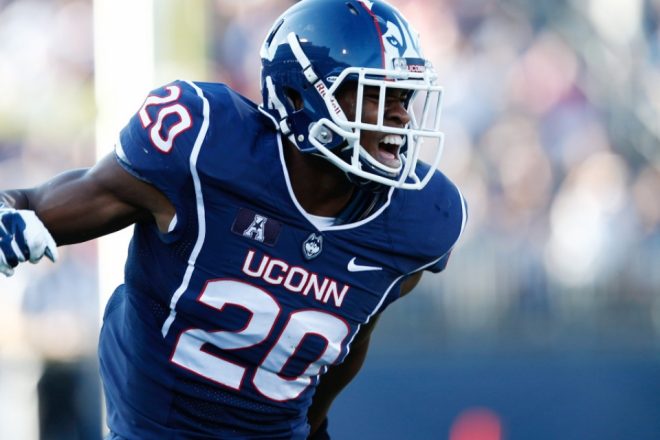 The Patriots got their man with Mike Gillislee, signing the restricted free agent running back to a two-year deal and in the process, lost their 5th round draft pick to Buffalo. That effectively means that they won’t be drafting a back, we looked toward a bigger one this weekend.

For this final Mock Draft before tomorrow (4-25), I used the big board of CBS

Right now, the Patriots don’t pick until Round 3, #72 due to some of the trades that they’ve swung for Brandin Cooks and Kony Ealy. Talk is still swirling that the Pats may swing a deal involving either Malcolm Butler or Jimmy Garoppolo. I don’t see either of them going anywhere in 2017. And if they were to trade Butler, then they’d be in the market for a cornerback. And with Belichick, he prefers the known commodity. The defense with Butler, Stephon Gillmore and Eric Rowe at corner is stacked.

Here is our Patriots Mock Draft 4.0: 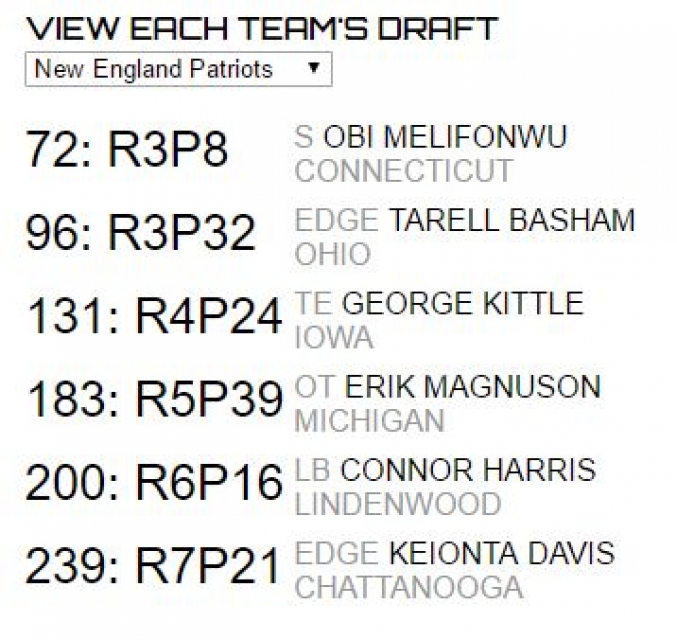 Round 3, Pick #72 SS Obi Melifonwu, UConn:
Bill Belichick loves to draft safeties early in the draft and after the disappointing performance by Jordan Richards, they’ll be looking for a long-term replacement for Pat Chung at the strong safety position. Melifonwu is an athletic freak at 6’4, 225. He ran a 4.40 in the 40-yard dash at the Combine, with a 44-inch vertical.

Frankly, we doubted that Melifonwu would be around in the 3rd. But the big board of CBS Sports has him falling all the way to New England at #72. He won’t be a free safety, he’ll be best in the box, where he has the size and athleticism to run with tight ends or step up in run support. The Patriots “big nickel”? He’s a perfect fit.

He has the speed and athleticism to run with the big wide receivers in certain situations as well. Huge steal for NE in the 3rd round.

Round 3, Pick #96 Edge, Tarrell Basham, Ohio:
The Patriots have scouted Basham and reportedly have a high level of interest. This would be a quintessential Belichick pick. In a draft chock full of talented edge players, taking a guy who has totally flown under the radar playing at Ohio.

He has an NFL-ready frame at 6’4, 269-pounds with long arms and big, strong hands. Basham was the Mid-American Conference’s Defensive Player of the Year 50 tackle including 16 for a loss, 11.5 sacks, 2 passes defensed, 2 forced fumbles and a fumble recovery.

He’s got the explosion off the ball with short area burst to get to the quarterback. He’s strong and sets the edge well. He’d project to be a third down sub-package player in his rookie year and a potential starter in Year 2.

Round 4, Pick #131 TE George Kittle, Iowa:
No change from Mock 3.0. Kittle is a 6’4, 247-pound tight end that will help build the depth they need at the position. Kittle was an honorable mention All-Big Ten pick last season, in 11 starts, he produced 22 catches for 314 yards and four TDs.

Round 5, Pick #183 OT Erik Magnuson, Michigan:
Magnuson is a 37-game starter for the Wolverines and is a solid run blocker who can get to the second level, has very good pass protection skills. He uses his hands well and can mirror pass rushers. He’s strong, physical and tough with good athleticism at the position.

Round 6, Pick #200 LB Connor Harris, Lindenwood:
Harris is a throwback, an extremely versatile kid who can play linebacker, running back and punt in an emergency. A three-time captain his stats speak of an era when players played for 60 minutes. In 2016, he made an incredible 138 tackles, including 8.5 for a loss, two INT, one for a TD. During his career, Harris also contributed as a running back with 50 carries for 328 yards and seven TDs. As a punter, he had a 38.8-yard average, with six downed inside the 20-yard line in 2016.

While he doesn’t have the length, you’d like at linebacker at 5’11, 242-pounds, he is a film junkie who is extremely well prepared and has tremendous production. He’s an inspirational leader on and off the field (3-year captain), who can play all three downs. Non-stop motor, and the ability to make plays all over the field.

Round 7, Pick #231 Edge Keionta Davis, Chattanooga:
Davis had his second straight FCS All-American season in 2016, tallying 10.5 sacks and three forced fumbles. At 6’3, 274-pounds he has the length and strength to take on offensive linemen in the trenches.