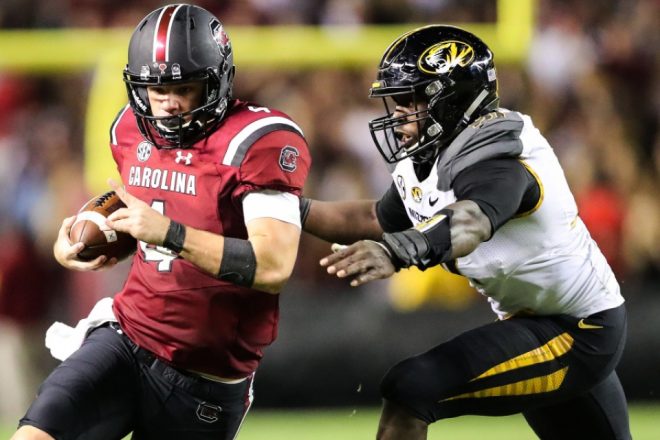 The Patriots are thin at defensive end; Jabaal Sheard has left via free agency and Chris Long has said that he isn’t coming back in 2017. The team did pick up Kony Ealy from the Carolina Panthers in a trade. Ealy has all the tools, he just needs to do it consistently. There has been talk that he didn’t take to coaching in Carolina, something he’ll have to do here to thrive.

That leaves him, Trey Flowers, Rob Ninkovich, and Geneo Grissom. Flowers came on in his second season and was arguably their best defensive lineman down the stretch. Ninkovich seems to be closer to the end of his career now after several solid seasons. Grissom was strictly a STs guy and didn’t contribute on defense. So, they’ll need to add some depth.

Edge rushers are like cornerbacks, you can never have too many good ones and the team is expecting Flowers to continue to improve on his 2016 season. Ealy will be looked at to contribute right away. That leaves Ninkovich and whomever they can bring in. Right now, the Patriots don’t draft until Round 3. But we don’t expect that to last. They’ll try to make a move to slide up into either Round 1 or 2 of the draft. And this next profile will be there if they can.

Charles Harris from Missouri is a 6’3, 253-pound defensive end who is another in a long line of productive edge rushers to come out of Mizzou. He was All-SEC second team in both 2015 and 2016. Despite the Tigers having a down year, Harris produced good numbers 61 tackles, including 12 for loss, 9 sacks, two passes defensed, two forced fumbles, and a recovered fumble.

Harris is versatile and can play either right or left defensive end as well as play standing up as an outside linebacker. He has good explosion off the snap, with loose hips that allow him to change direction quickly with no loss of speed.

He’s got a spin move where he can turn in either direction quickly. Harris has a non-stop motor and can go sideline to sideline. He’s got the quickness and strength to beat tackles to the inside on his pass rushes. Decent in coverage, but is inconsistent against the run.

– Quick first step, stays low and explodes off the edge

– Excellent quick, hands, can shed blockers and get to the QB

– Only adequate height for a defensive end

– Can get washed inside at times in the running game

What his Role Will Be:
Harris’ role would be to initially be a part of the rotation for the Patriots on the edge as a sub-package pass rusher. He could also kick outside as an outside linebacker and has the ability to cover or blitz from the outside.

Yes, with some added lower body strength and improved against the run, he could be looking at starting reps in 2018.

Harris will look to earn his way on the field and he’ll play special teams as well as contribute on defense. He could replace Geneo Grissom on the roster this season.

Good, he should see some action on the coverage units

Harris is a first round talent and will be a guy that will contribute immediately as a rookie. First as a sub-package pass rusher, but I think he’ll push for starting reps right away. His numbers slipped a little bit in 2016 but the coaches asked him to try some different things and he struggled a little. But in the second half of the season, he took off and was dominant.

He’s the type of player that Bill Belichick loves, a versatile young player with a non-stop motor that can play on either side as a defensive end or stand up as an outside linebacker where he has prototypical size. He’s can also play on special teams.

He’d be a tremendous fit on a Patriots defense that can use a talented edge rusher. With his agility and footwork (former basketball player), he can get after the passer and be a very productive professional.

If the Patriots can find a way to work themselves back into the second half of the first or second round, Harris would be a guy, in our opinion, that they’d definitely take a long look at. He’d fit in seamlessly in the locker room as well as on the field.