5 years ago at 6:00 am ET
Follow @SteveB7SFG
Posted Under: Uncategorized 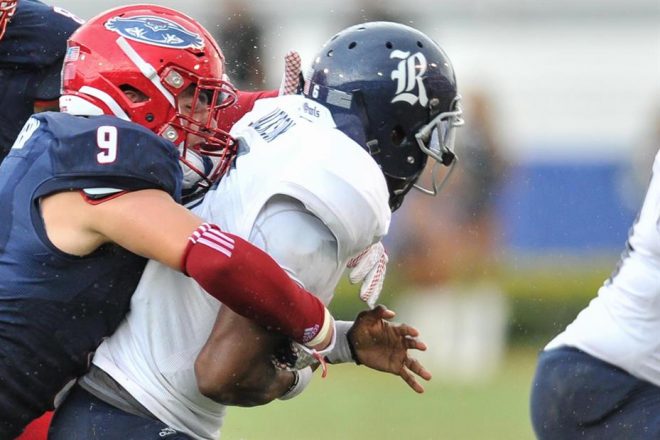 Edge rushers are like cornerbacks, you can never have too many good ones and the team is expecting Flowers to continue to improve on his 2016 season. Ealy has flashed and had an incredible Super Bowl with Carolina but hasn’t been able to do it consistently. The Patriots will have plenty of options but as of today, they don’t pick until the third round.

Trey Hendrickson from Florida Atlantic is a 6’4, 266-pound defensive end that has shown good production despite opponents keying on him. League coaches named him first-team All-Conference-USA in 2015 – 2016. He had excellent production in his final campaign with 51 tackles, 15 for loss, 9.5 sacks.

He’s good at jarring the ball free and forced four fumbles in his final season at Florida Atlantic. He shined at the East – West Shrine Game and was named as the game’s most outstanding defensive player.

– Very good production with 23 sacks the past two seasons

– Quick off the snap and explosiveness off the edge

– Versatile, can play either DE or OLB

– Lean lower half of his body

What his Role Will Be:
Hendrickson’s role would be to be a part of the rotation for the Patriots on the edge as a sub-package pass rusher. He could be asked to drop into coverage a bit as well.

Yes, with time to get a bit stronger in the strength and conditioning program, he could develop into a premium pass rusher and become an every down player.

Geneo Grissom, Hendrickson will become a Special Teams standout player early. He will earn his reps there and in sub-packages. But with a strong summer, he may push for some reps defensively early

Excellent. Blocked a punt, two field goals and an extra point in 2016.

Hendrickson is a player that won’t be denied, he has the mentality that the coaches love and look for. He does a good job of setting the edge in the running game although he will need to beef up a little at the NFL level.

Scouts were focusing on his arm length and lack of dynamic pass rush ability until the East – West Shrine Game where he turned some heads with strong play all week. He has the positional versatility to play either as a defensive end with his hand in the dirt or as an outside linebacker. He hasn’t had much experience playing standing up and that may take some getting used to if the team feels he’s best suited there.

In our opinion, this kid can play defensive end and be a productive one. He’ll start out as a Special Teams and sub-package pass rusher specialist but he has the ability to become a true three-down player. His versatility to play multiple positions and be a key contributor in Special Teams will resonate with Bill Belichick.

Hendrickson is slated to go somewhere between Rounds 3 and 4 in the 2017 NFL Draft. The Patriots will be looking to add a couple of edge rushers this spring and if he’s on the board when they are on the clock, he’d be a nice fit for the Patriots defense. He has the mentality, the drive to succeed at the next level.