Blount Still in Limbo – Speaking of free agent running backs without a contract, last year’s starter LeGarrette Blount is still out there in free agency without a new contract.  Blount scored 18 touchdowns in 2016 and one bone of contention may stem from newcomer Rex Burkhead, who signed a one-year deal worth $3.1 million this offseason.

Blount earned $1.5 million last season and may be looking for a dollar amount that’s higher than a player who has yet to play a down in this offense, which could be the potential sticking point between the two sides.

While the Patriots could still use a bigger back, with Dion Lewis and James White joining Burkhead in the backfield, they have enough depth to at least put them in position to pursue another option if they decide to move on from Blount.

Gronkowski ‘Ready to Roll’ for Patriots Workouts – Rob Gronkowski has had a busy few days.  Between crashing Wrestlemania on Sunday night along with having some fun during pregame at Fenway, his spirits are certainly high and the veteran tight end seems fired up for the upcoming NFL Season.

According to ESPN, the veteran tight end is looking forward to getting back out there and playing football this season.’

“I’m feeling great. I’m good to go,” Gronk told ESPN. “It’s been about four months now (since back surgery). Just been back with the team a lot during the week, doing my rehab with the trainers there. I’m feeling good. I’ll be ready to roll when (the) offseason program starts. Super excited to get back on the field.”

Gronkowski said that watching his teammates win a championship without him was tough, but he’s looking forward to hopefully helping them win another one this season.

“I’m going to make sure when I hit that field this year I’m super ready to go,” said Gronkowski.  So [it] definitely motivated me big time to get back out there, so we can get out there with the boys and do it again.” 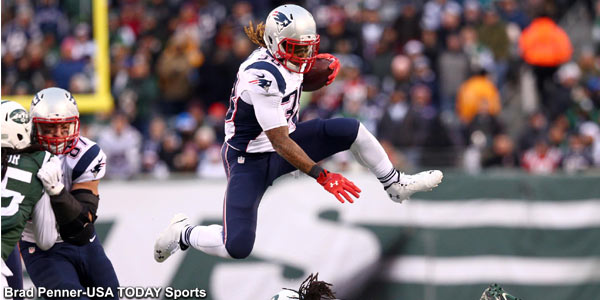 Door remains open for Bolden – Free agent running back and special teams standout Brandon Bolden remains a free agent and a return to New England apparently can’t quite be ruled out just yet.

According to ESPN’s Mike Reiss, he’s been told that the door hasn’t been closed on Bolden returning and that the two sides have maintained an open dialog.

Reiss also points out that since no one has stepped up to sign Bolden, it wouldn’t be a surprise if he ended up back in New England in 2017.

Bolden appeared in 14 games during the 2016 season with just one rushing attempt, along with two receptions.

The free agent running back posted a picture on Instagram last week of he and his little one, which shows that despite not being on an NFL team, that’s not stopping him from taking care of the ones he loves.

Thank you @jessicacallahanphotography Me and my Crawfish

Seattle Patriots Fan’s Tip Led to Recovered Jerseys – According to Cheryl Fiandaca of WBZ, Tom Brady has 19-year-old Dylan Wagner to thank for having both of his Super Bowl jerseys back in his possession.

According to Fiandaca, Wagner admitted that he “knew exactly who had it” and it’s because of a transaction he had on Ebay with Martin Maurico Ortega where he sold the alleged collector a jersey.

Wagner said that Ortega showed him a photo of his collection, which was when he noticed Brady’s missing Super Bowl 49 jersey.

“He sent me 30 photos of his collection. Front and center was Tom Brady’s Super Bowl 49 Jersey. I asked him outright, ‘How did you get that?’ and he says ‘I’ll tell you later,’” Wagner told WBZ.

Wagner reportedly had a relationship with a local ATF Special Agent in Boston, and after hearing about the fact Brady had his jersey stolen after this year’s Super Bowl and the one from Super Bowl 49, he filled him in on what he knew.

He said that he’s glad Brady has his jerseys back, and he’d love to one day get the opportunity to meet the Patriots quarterback.

“I would love to meet Brady one day, hopefully,” said Wagner. “It would be a dream come true. I’m just really glad he gets his jerseys back.”

By: Robert Alvarez
Rookie receiver Tyquan Thornton shares a photo over Instagram confirming he has signed a contract with the Patriots
19 hours ago