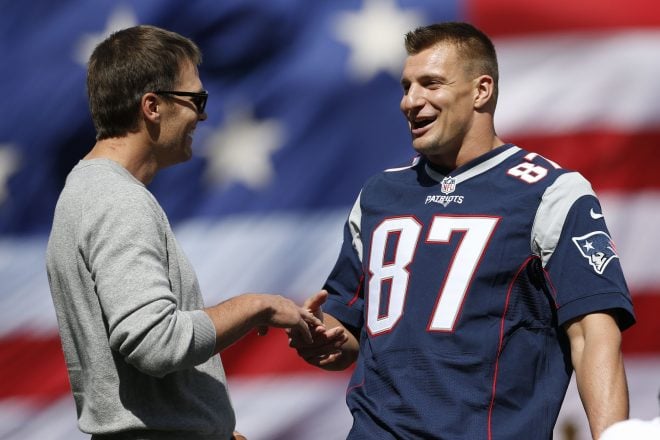 Entering the historic ballpark from behind an American flag on the framed Green Monster in left field, Brady and company surprised everyone in attendance when he unveiled to the crowd that he was wearing his white Super Bowl jersey that was just recently recovered following the now infamous theft from the team locker room.

As the teammates approached the pitchers mound for the ceremonial first pitch, Gronk had an unsuspecting trick up his sleeve as he snatched the jersey away from Brady and ran off into the outfield. Brady determined not to lose the jersey for a second time, jokingly ran after Gronk and tackled him to the ground, leading to a thunderous applause.

From #Wrestlemania to #OpeningDay in under 12 hours, Gronk just wants to Gronk. pic.twitter.com/uk2JO5gFi0

Brady, a former 18th round draft pick of the Montreal Expos in 1995, then delivered the first pitch to Red Sox second basemen Dustin Pedroia. The Red Sox would win the game in the Patriots prescence by a final score of 5-3 over the Pittsburgh Pirates.

By: Robert Alvarez
Julian Edelman appears on the Barstool Sports "Pardon My Take" podcast, reacts to Bill O'Brien's hiring, and more.
20 hours ago