We’re finally at the end of the week, and here’s a look at this morning’s top stories:

JONES ALMOST WASN’T A PATRIOT – One key player who played a big role in the team’s success in 2016 was cornerback Jonathan Jones, who Mike Reiss highlighted on Thursday while looking back at rookies who made an impact last season.

Reiss points out that the undrafted player out of Auburn had other options after the draft, but ultimately chose New England primarily off the advice of one of his advisers.

It worked out well for New England, with Jones earning a role despite a crowded secondary that included Malcolm Butler, Logan Ryan, Darryl Roberts and fellow rookie Cyrus Jones.

His scouting report last season pointed out a lot of measurables that we saw out on the field, with Jones having been relatively solid in coverage last season.

“Has the foot quickness and fluid hips for smooth transitions from press coverage. Can open up and match quickness with quickness,” were features that were listed under “Strengths” for the rookie.  “Looks to make plays outside of his area. Former high school sprinter and hurdles champion. Able to carry long speed stride for stride. Man cover specialist with springy feet and ability to shadow his man. Usually near the throw. Has closing burst and ball skills to be aggressively disruptive at the catch point. Finds the deep ball and gets his head around to challenge. Finished 2014 with 16 passes defensed and six interceptions. Much better instincts underneath or in man coverage.”

He played in all 19 games last season and was also a contributor on special teams.  Not bad for a player who had been projected as a 4th or 5th round pick, and with a Super Bowl ring to start his NFL career, it further proves he made the right decision. 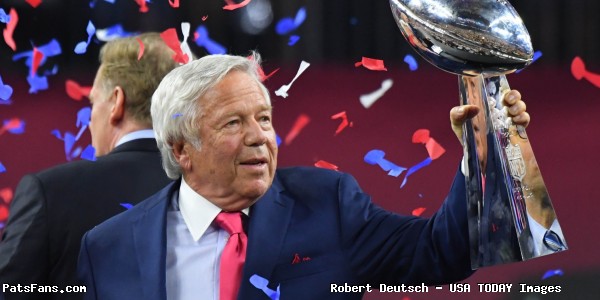 Kraft was reportedly part of a unanimous vote among owners to ban leaping FG blocks.

Kraft Among Owners Who Voted On Leaping FG Block Rule Change – While it was no surprise to see owners across the league vote to end the ability for players to leap over the line of scrimmage on field goals and point-after attempts, it was surprising to see that Robert Kraft was among them.

According to ESPN’s Mike Reiss, owners unanimously voted 32-0 in favor of the rule change, with Kraft opting to show solidarity among the rest of the league, despite the fact his team was the one to benefit from it the most.

As pointed out in an earlier edition of this column, Shea McClellin, the last player to attempt it and a player who had a successful one against Baltimore last season (see above), wasn’t pleased about the rule being changed, which will now keep him from having another chance at attempting it again.

J.J. WATT’S YOUNGER BROTHER WORKS OUT FOR PATRIOTS – The Patriots have been trying for years to bolster a consistent pass rush, and it looks like they recently took a look at a player who could definitely help with that.

According to CBS 24/7, Wisconsin Badgers linebacker T.J. Watt reportedly worked out for the Patriots.

Watt Finished his senior season with 63 tackles including 15.5 for a loss, as well as 11.5 sacks.  He also lit up the NFL Combine, finishing first among linebackers in several categories, including the 20-yard shuttle (4.13 seconds).

As far as the Patriots having a shot at him, the visit was likely just “due diligence” and seems unlikely at this point, especially given that Watt is projected to be taken in rounds 1-2.  As of now, New England doesn’t have a 1st or 2nd round pick, which means unless Watt slips into round three (which doesn’t seem likely), or unless the Patriots trade back into either of those rounds, he’ll be playing elsewhere in 2017.


The Dolphins haven’t been able to overtake the Patriots.

MIAMI WRITER WANTS PATRIOTS CALLED FOR “TAUNTING” – New England has certainly had quite the offseason so far after making some terrific additions to their roster, including receiver Brandin Cooks and defensive back Stephon Gilmore, and that has one writer down in Miami feeling a little frustrated.

Greg Cote of the Miami Herald writes that after winning it all, the Patriots haven’t let up and that a “giddy” Patriots owner Robert Kraft spent this week’s owners meetings in Pheonix “preening, flexing” and “rubbing it in.”

Belichick turns 65 next month. Brady will turn 40 before next season starts. It isn’t fair or logical. The idea that the most successful coach/QB combo in NFL history has some prime time left — maybe a lot of it — seems ludicrous. But it remains the cruel, unrelenting reality the Dolphins, Bills and Jets must keep dealing with.

As far as teams in the AFC East are concerned, Miami is the only serious contender at this point within the Division, having made it into the postseason last year.  But Cote points out that the Patriots have done a good job remaining special, while the Dolphins right now are trying to go from mediocre to pretty good, and that next step is one they’re having difficulty making.

It’s just frustration from a market that’s likely tired of being runners-up year in and year out and trying to finally breakthrough.  Unfortunately, the Patriots simply haven’t done them any favors during this offseason and 2017 looks like it might be another daunting challenge for Miami.

READ NEXT:
Who Will Be the Patriots’ Slot Corner in 2017?
Posted Under: Daily Patriots Rundown