Goodell Finally Planning to Visit Foxboro – After being chased out of New England thanks to the incredible disdain and rancor he managed to create among every single Patriots fan, it appears that Roger Goodell is ready to make his return to Foxboro.

With New England having won their second Super Bowl in three seasons last month, apparently Goodell believes that all of the misery he created here, along with the damage he did to Tom Brady and the Patriots’ organization, is just water under the bridge and he’s planning on being at Gillette Stadium for the home opener in 2017.

It doesn’t matter that he was still calling Brady a cheater during the week leading up to the Super Bowl, but now he’ll be on hand at Gillette Stadium when the team unveils their 5th championship banner.

Robert Kraft dropped the gauntlet Monday when he said the commissioner was “welcomed to come” to the team’s home opener.

“Well, I think I’ll let you all ask him that,” Kraft said Monday via the Boston Herald. “Look, he’s commissioner in the league. As we all know, he has the right to go wherever he wishes to go. And if he wanted to come, he’s welcomed to come. We’re happy we’ll be celebrating our fifth banner. He can decide whether he wants to be there.”

Knowing how much he’s disliked in this region, it will likely be a choice fans will do their best to help make him regret, but one he’ll probably be glad to get out of the way.  Goodell skipped the 2015 banner ceremony and hasn’t stepped foot at Gillette Stadium in nearly two years.

The date and time of the game have yet to be announced, but you can bet there will be a sea of boos unleashed should his face hit the scoreboard.

Columbia High School Retires Flowers’ Jersey – On Tuesday, one member of the Patriots got a little recognition, and it was definitely well deserved.

According to AL.com, Patriots defensive end Trey Flowers returned to his former stomping ground and was honored at his high school on Tuesday, with Columbia High in Huntsville opting to retire his #88 jersey.

“It’s definitely something special to be able to go back to your school and have your jersey retired,” Flowers said in a video provided by Huntsville City Schools.

Thanks Trey Flowers for taking time to speak to us. pic.twitter.com/Xn5VpHzSNS

Good for Flowers, who played in all 16 regular season games in 2016, finishing with a team-best 7 sacks and then added 2.5 more in the postseason.

McClellin not impressed with NFL’s decision to ban leaping FG block – Whenever the Patriots enjoy success exploiting an NFL rule (or lack thereof), it usually ends with the league making a change to ensure that success doesn’t continue.

On Tuesday, the NFL ruled the technique of leaping over the line of scrimmage to block a field goal is now illegal, with Shea McClellin going down as the final NFL player to try it thanks to his attempt in Super Bowl LI, which was called back after he was called for an illegal formation penalty.

McClellin was the final Patriots player to successfully pull it off, with the linebacker doing his best Jamie Collins impression when he blocked a field goal against the Ravens back on December 12th.  It was a big play at the time, with New England leading 2-0 in the first quarter and they turned around and marched back down the field and scored a touchdown to take a 9-0 lead.

The Ravens eventually battled back but fell short, and thanks to that play, New England walked away with a 30-23 victory on Monday Night Football.

The NFLPA reportedly endorsed eliminating the play citing safety concerns.  For now, it’s safe to say McClellin looks like he might disagree. 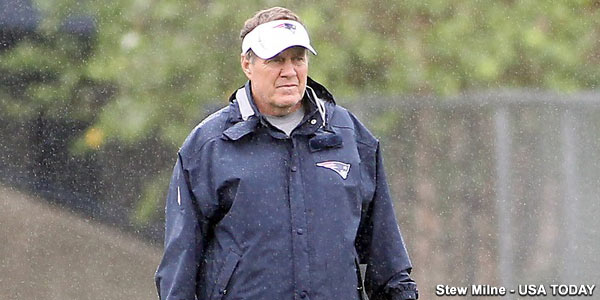 The Patriots paid back $4.5 million in cap space this week.

Patriots Lose Cap Space After Repaying Cap Loan – Even after the moves the Patriots have made this offseason, they still found themselves sitting with plenty of cap room as they continue building their roster for the upcoming season.

Following the change, according to Patriots salary cap guru Miguel Benzan, the team currently sits with $21.9 million in cap space.

The Patriots weren’t the only ones in this situation, with the Cowboys, Broncos and Saints among other teams who took advantage of the additional space.

Raiders Coach Not Happy With Patriots Moves – Oakland Raiders head coach Jack Del Rio never got an opportunity to face New England in the postseason and it seems he might not be looking forward to a potential match-up should one arise.

Del Rio admitted on Monday that after seeing the moves New England has already made this offseason, he appears concerned that the road through the AFC will still likely go through the Patriots in 2017.

VIc Tafur of the San Francisco Chronicle Tweeted on Monday that Rio told him, “I do cringe a little bit. Cooks can really create separation.”

Del Rio was obviously referring to New England receiver Brandin Cooks, who the team acquired from the Saints this offseason.  But the Patriots are the least of his problems as the Raiders now face a difficult challenge in 2017 after it was announced Tuesday that the team is leaving Oakland and heading to Las Vegas, which will likely be quite a distraction for a club who had finally seemed to be heading in the right direction after finishing 12-4 in 2016.

The 8-hour trek by car will likely sever the connection to one of the wildest and most passionate fans in the league, which is obviously a major disappointment for a group who supported that club week in, and week out for so many seasons, only to see them leave town.  Those who wish to stay on will continue pouring money into the machine for at least two more seasons, with the relocation coming after their current stadium lease expires after the 2018 season.

Principal owner Mark Davis knows there will be backlash, and he’s just hopeful that the fans support them until the end.

“We know that some fans will be disappointed and even angry,” said Davis via the New York Times. “But we hope they do not direct that frustration to the players, coaches and staff.”

What’s to be frustrated about?  After 13 straight seasons without a playoff appearance, this is a team finally on the way up with a young talented nucleus of players who will likely become a serious contender both in the AFC West and in the Conference in the coming years.

Instead, another city will get to enjoy it while Oakland joins St. Louis and San Diego as the latest fan base who get to have their hearts broken while the NFL machine rolls on out of town without them.