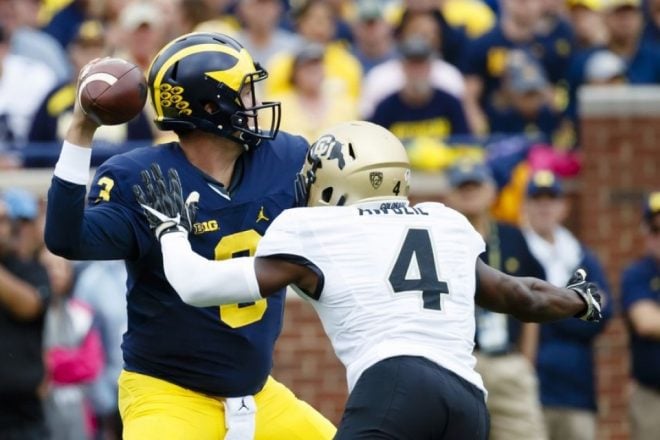 The Patriots lost Logan Ryan in free agency and the jury is still out on whether Malcolm Butler returns at least for the 2017 season. With the signing of Stephon Gilmore, the Patriots can still use another corner, especially if Butler is indeed traded. That would leave them with Gilmore and Eric Rowe outside with Jonathan Jones, Cyrus Jones and Justin Coleman battling it out for the third corner position.

The draft is deep as usual in good talented cornerbacks, with many talented players being available in the middle rounds. And with no current picks in the first or second round, the Patriots will be selecting starting in Round 3. So, we’ll base our player profiles (for now), on players we think will be around then.

Some of the key qualities that the Patriots like to see in their cornerbacks are as follows:
Physicality
Versatility
Ability to Play Press Corner and Jam at the line
Must be Willing in Run Support
Sure Tackler (Logan Ryan)
ST’s Contributor

Chidobe Awuzie from Colorado is a cornerback with excellent size and strength that can play both press man and zone. He’s versatile and has covered outside as well as inside in the slot. Was Second Team All-Pac 12 in 2015 and 2016.

Made 65 tackles, with 12 passes defensed, two forced fumbles and an interception in 2106 for the Buffaloes. He’s got the size, 6-0, 202-pounds to line up outside and matchup with the bigger wide receivers.

He’s got good footwork for a bigger corner and is smooth at turning and running with wide receivers. He has a good jam at the line of scrimmage and has played confidently and well when put on an island against a top opposing WR. His top end speed isn’t fantastic but he should be able to run and mirror well.

Awuzie is good in run support although at times he wasn’t as aggressive as he should have been. Colorado used him as a blitzer his final two years and he was productive, notching seven sacks coming off the edge.

– Versatile, he can play outside or in the slot

– Good ball skills, gets his head turned around

– Top end speed is a question

– Needs to keep improving at defending the run and tackling

– A bit grabby when running downfield with WRs, could result in flags

What his Role Will Be:
Awuzie would immediately compete for reps. Initially, that may be inside in the slot where he has played in the past. He has the size and athleticism to match up anywhere.

Will his Role Change from Year 1-2?
Yes, with improved play in run support and tackling, he could vie for starter’s reps on the right side opposite Gilmore.

How Many Downs Can He Play?
Four

What Current Player on the Roster Will He Replace?
Logan Ryan who departed via free agency, and Awuzie will battle the Jones’ and Coleman for the third CB slot

What is his ST Value?
Good, he played some in Colorado and you can expect to see him on the coverage units as a gunner for the Patriots.

Conclusion:
Awuzie was essentially a starter since the end of his freshman year. He’s got lock-down corner qualities and is athletic, versatile, and aggressive. He’s very alert and instinctive on the field with good ball skills when the throw is on the way.

For a bigger corner, he can change direction quickly and will mirror even the smaller, shiftier slot wide receivers down the field. His top end speed was thought to be a question but ran well (4.43) at the Combine.

Awuzie is a smart, physical player that rarely makes mistakes or is out of position. His tackling can be an issue as he tends to go too high, where in the NFL the bigger receivers or tight ends can break those for yards after the catch.

He’s a guy that would fit in well with New England if they decide to pursue him. He’s got very good size, is aggressive and versatile, a facet of his game that plays well with Bill Belichick. He can play outside or in the slot. That quality as the potential third corner allows Matt Patricia to use him as a matchup player either inside or out. He’s a dangerous and effective blitzer off the edge and can play gunner on Special Teams.

Awuzie is a player that may be around in Round 3 when the Patriots get to make their first selection. If he’s still there, then he’d be a good fit for New England and will immediately compete for starting reps as the third corner.