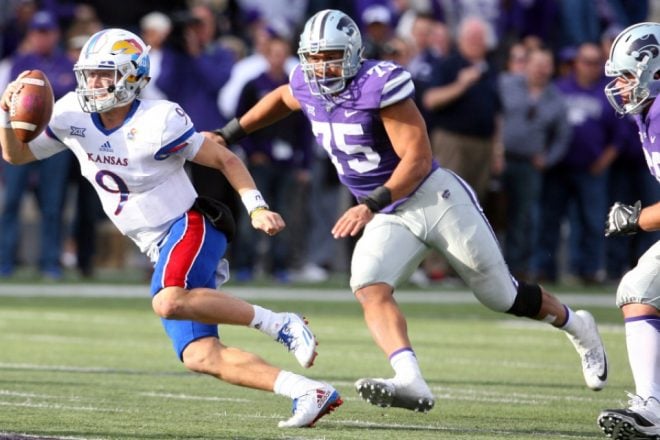 Edge rushers are like cornerbacks, you can never have too many good ones and the team is expecting Flowers to continue to improve on his 2016 season. Ealy has flashed and had an incredible Super Bowl with Carolina but hasn’t been able to do it consistently. The Patriots still have plenty of options in the draft but as of today, they don’t pick until the third round….don’t expect that to last.

Jordan Willis from Kansas State isn’t the biggest guy at 6’3, 255-pounds but he is certainly a player to keep an eye on. His production in 2016 was very impressive as he racked up 17.5 tackles for a loss as well as 11.5 sacks.

Willis has a very quick first step and explodes off the ball very well. He has a non-stop motor and gives his all on every down. He’s played nearly all of his snaps from the left side and has very strong hands although he can definitely use some coaching on his hand usage.

He does a very good job of setting the edge in the running game. He’s a very instinctive player and is rarely out of position. He’s a dedicated film junkie and is known to game plan for each opponent, something that will resonate quite well with Bill Belichick.

Willis had a very impressive Combine and flashed athleticism that he wasn’t thought to have. He ran a 4.53 in the 40-yard dash while doing 24 reps on the bench press, a 39-inch effort in the vertical jump, a 4.28 time in the 20-yard shuffle and a 6.85 time in the 3-cone drill. Overall it was a very good day for the senior in Indy.

– Very strong for his size and explosive

– Quick first step and good straight-line speed off the edge

– Non-stop motor, all out on every down

– Needs to use counter moves in his pass rush repertoire

– Not a big guy, and may be maxed out for his frame

What his Role Will Be:
Willis’ role would be part of the rotation outside for the Patriots defensive line. He’d project initially as a sub-package pass rusher to add depth and fresh legs to the Patriots pressure on the QB. But with some coaching, he could find himself pushing for more reps

Will his Role Change from Year 1-2?
Yes, with his ability to set the edge in the running game and an improved hand usage in the passing game, he could push for being a starter in 2018.

What Current Player on the Roster Will He Replace?
He’ll challenge Ninkovich and Ealy for sub-package pass rush reps right away.

Conclusion:
Willis was thought to be a bit too stiff off the edge in his film but after an impressive showing in Indianapolis, he may be a late riser on several teams’ draft boards. He shows very good production in diagnosing the play in the backfield and setting the edge in the running game.

His motor and ability to finish is excellent. He’s already a good pass rusher and with some coaching has the ability to be even better. He was originally thought to be a third rounder but with his performance and his show of increased athleticism at the Combine could move up into Round 2.

Willis’ coach long-time Kansas State coach Bill Snyder called the linebacker the “Epitome of Kansas State football.” He’d be a good fit with the Patriots defense and could immediately be an impact player as a rookie with his ability to rush the quarterback.

Willis’ tape against Stanford can be seen here:

By: Robert Alvarez
The Date and time for Vince Wilfork's Patriots Hall of Fame induction ceremony is announced by the team,
59 mins ago