Good morning, here are Sunday’s Patriots news 2-5. No AFC East Notes for this week as we’re on to the Super Bowl. We’ll have them back next week.

Well, the Super Bowl is finally here and the Patriots and Falcons square off later today for the right to lift the Lombardi Trophy as Champions of SB LI.

This is a good time to look back at the journey that the 2016 season truly was. It began in the spring workouts of the OTAs and minicamp and continued right thru the preseason and into the regular season and the playoffs.

It seems like ages ago when we made the trek down to Gillette for the first real look at the team during the minicamp workouts. From our first looks at free agent signing Chris Hogan and Martellus Bennett, then the scramble for a second look at photos because Tom Brady wasn’t wearing an NFL sticker on his helmet…. Yes, we’ve come that far. 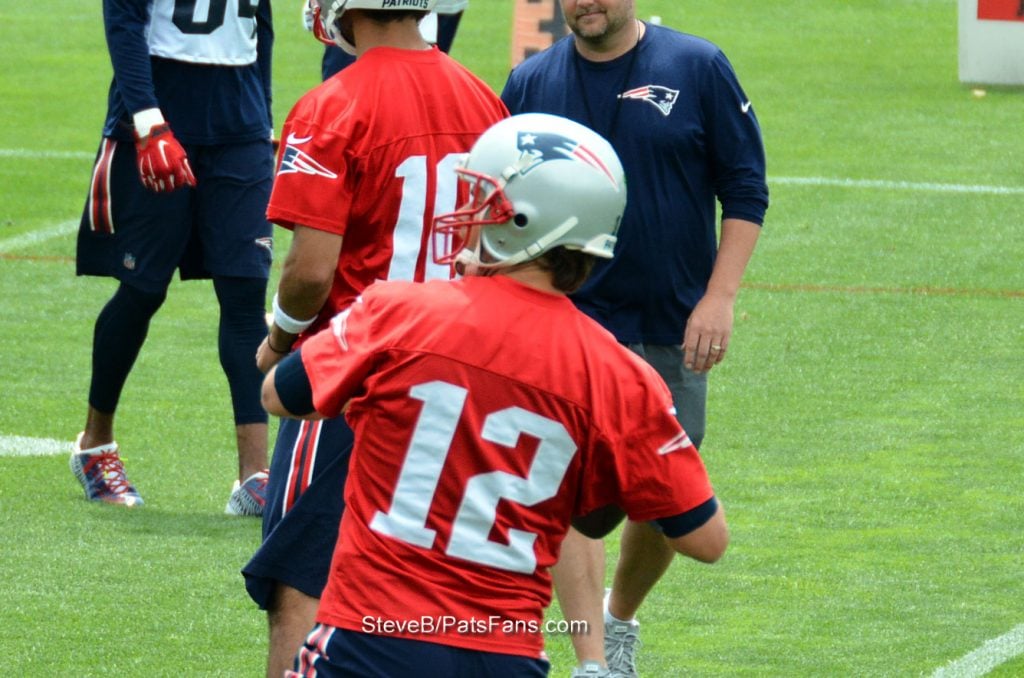 Tom Brady raised a stir in mini-camp and training camp for not having an NFL sticker on his helmet. (SBalestrieri photo)

Ty Law Comes up Short in NFL HOF Vote:
Former Patriot great CB Ty Law won’t be getting fitted for his gold jacket just yet. Although we here feel that Law is more than qualified, he came up short in his bid for the NFL Hall of Fame released on Saturday night.

He wasn’t alone, along with Law, Terrell Owens, John Lynch, and Brian Dawkins all failed to generate enough votes for induction in 2017. Hopefully, Law will get the votes and have someone like Ron Borges advocate for him in 2018.

Belichick Again Pushed the Right Buttons:
Every season, as soon as a big move is made, writers and fans can’t wait to jump all over the “GM Bill is hurting the Coach Bill” in regards to Bill Belichick. By now, you’d think that Belichick would gain a little bit of leeway in these matters but you’d be mistaken.

At the first sign of letting players go, the lines begin at the Tobin Bridge as “this is the year they fall” begins in earnest. The Patriots traded Chandler Jones to the Cardinals and later released former top draft pick, Dominique Easley. The defense was going to fail, “where’s the pass rush coming from”… you remember?

Conventional thinking was, Jones was all that was needed to push a Cardinals team over the top in the NFC. Belichick was roasted for this one. But although Jonathan Cooper was released and benefitted nothing in return there, the draft pick turned into two and the Patriots got both Joe Thuney and Malcolm Mitchell in the draft. And the money they saved on the salary cap allowed them to sign Chris Long in free agency.

Next Bill traded LB Jamie Collins to the NFL equivalent of Siberia in the Cleveland Browns in an attempt to shake up the defense. This WAS surely the death knell for the defense in 2016, right? Wrong. The team turned it around and finished as the #1 defense in terms of points allowed in the NFL. Still, the naysayers had to find a dark cloud in there and feel compelled to point out the slate of opposing QBs wasn’t a Murderer’s Row. Even after holding the Steelers offense to essentially nine points in the conference championship game.

Bringing in Hogan and Bennett were tremendous acquisitions for the team. Each has fit seamlessly into the offense and have been great additions to the team. Bill brought back Dante Scarnecchia this season, and that is arguably the best move of all. He brought around Marcus Cannon when no one and I mean no one thought that would be possible. You remember?

The under-the-radar depth moves of bringing in Shea McClellin, Kyle Van Noy and Eric Rowe were all positive moves. While none of them are world-beaters in themselves, they each have provided good production and have fulfilled a role on the defense.

How fortunate the fan base has been the past 17 years with Belichick at the helm. As a youngster growing up and watching the nomad Pats play in Fenway, BC, Harvard and the old stadium in Foxboro, I used to wonder what it was like to watch the home team go to the playoffs.

Now we’ve come to expect a dozen victories and a deep playoff run as a normal occurrence in these parts. But 7 Super Bowl appearances with Brady and Belichick at the helm for the past 16 seasons is a ridiculous amount of success.

It has been an amazing run and it isn’t over yet… until the draft and the invariable big move(s) comes along…right?

Both teams have a large contingent of fans south of the border as the NFL is immensely popular there. The stadium is in a very nice area of Mexico City and anyone who would be making the trip would enjoy it tremendously.

Having lived and worked there in the past, I can tell you first hand that football is huge there and watched first-hand the Super Bowl between the Saints and the Colts. The Patriots Mexico Fan Club should be there in force.

Pats WRs Get the Rodney Dangerfield Treatment from Keyshawn:
The rest of the country is sick of the Patriots winning and want to see them lose. That fact is undeniable and once it comes to the forefront, it gives birth to the stories that invariably follow that the players aren’t really as good as many believe.

This week, former WR Keyshawn Johnson took a shot at the Patriots wide receivers. Not only is Johnson not a fan of their talent, but went so far as to say that if they didn’t play for New England many wouldn’t be in the NFL.

“When you see guys that fail and play for other teams at the receiver position, they can go to New England and excel and everybody goes, “Oh my God, Oh my God, these receivers are top of the game.’ Well, they couldn’t excel with other teams because of the system,” Johnson said. “If they were on other teams right now, they probably wouldn’t be on the 53-man roster.”

Raise your hand if you’ve seen this before, maybe not so bold, but this isn’t new. Julian Edelman had fun with it however, with a wink and grin he said a few times “WHO?” before adding this gem to Mike Giardi of CSNNE.

Goodell Responds But Doesn’t Answer Every Question During SB Presser:
With the slickness of a Washington politician, NFL Commissioner Roger Goodell held his Super Bowl State of the League press conference and it was noteworthy for what wasn’t said rather than what was.

Goodell responded to every question but in a classic case of deflection, he answered next to nothing. Surprising? No, but in some cases, it was almost hilarious in the ridiculousness that transpired.

One thing is clear, he’s sick of answering questions about Deflategate and told fans of NE basically to shut up and move on. Roger the dodger then said his relationship with the Patriots wasn’t awkward and if invited he’d definitely come back to Foxboro. Really? The Commissioner of the NFL needs an invite?  With a Patriots win tonight, Goodell will most certainly be invited to Foxboro for the season opener. Unless a supermarket giveaway in Peoria or a business meeting in Liechtenstein requires his immediate attention.

But the best of his deflections was on the subject of one website that was denied Super Bowl credentials. Asked by a reporter why Barstool Sports was denied credentialing and in effect didn’t that hit home the thought of the NFL as the “No Fun League”, Goodell jumped at the chance to run in another direction.

Barstool, in a total self-promotional move, staged a sit-in at NFL HQs and was forcibly removed from there. Goodell claimed to have never heard of them and then went on and on about the celebrations that initially marked the “No Fun League” as if that was the burning question… slick move, but we’re not buying that one.

His Fan Forum question and answer session were a carefully selected farce by the league with softball questions fed to him in a manner that would make North Korea proud.

So how was your week?