1 year ago at 9:01 am ET
Follow @IanLogue
Posted Under: Patriots News 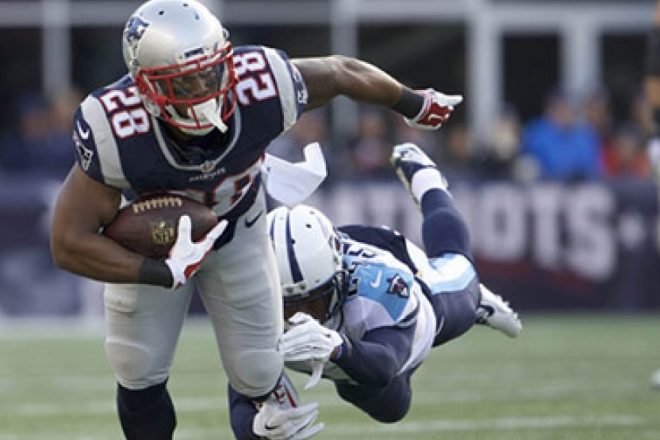 1) One other interesting debate being had by NBC Sports Boston’s Tom Curran as he continues doing his Top 50 Patriots Under Bill Belichick is the comparison between former New England RB Kevin Faulk and current Patriot, James White.

For anyone who remembers, Faulk was selected in the second round of the NFL Draft in 1999 by then-head coach Pete Carroll.  Following Carroll’s firing after that season, the former LSU standout ultimately ended up becoming a versatile weapon in the Patriots offense under Bill Belichick.  Faulk returned kicks and established the 3rd-down back role that we see in the offense today and he became such an intricate part of what New England did.

Meanwhile, White has been another terrific weapon in the offense but unlike Faulk, he doesn’t return kicks and he’s been here for just seven seasons.  He’s been terrific as a 3rd-down back for New England and has obviously had some big moments, including the game-winning touchdown run against the Falcons to cap the Patriots’ comeback as they won their fifth championship.

Former Patriots linebacker Ted Johnson, who played with Faulk, said the choice has to be Faulk.

“I’m a huge James White fan,” said Johnson. “Clearly, when you think of James White you think of that 2016 Super Bowl. But Kevin Faulk is in that Troy Brown category. Whenever you needed him, he was money in the bank.”

Ultimately, when it comes down to it, the edge would have to go to Faulk just because of his tenure and everything he did with the club.  However, what’s interesting about this conversation is the fact that White sort of doesn’t get quite the credit he deserves as a player, although he benefitted largely due to Tom Brady being in the offense.  Brady did a great job of getting the ball in his hands in space and allowing him to make plays, which is something Cam Newton didn’t do last year.  Newton oftentimes got the ball there late, with White catching just 49 passes for 375 yards, his lowest yardage total since 2015, which was his second year in the league.

Another thing that stands out is that Faulk stepped up big time the year Brady got hurt in 2008, finishing with career-high totals after rushing for 507yds and averaging 6.1-yards-per-carry, while also catching 58 receptions for 486-yards with Matt Cassell at the helm.  He also had three rushing TDs and three receiving TDs that season.

In the end, both are terrific players and these debates are certainly fun to talk about.  It’s safe to say White has his current role thanks to Faulk but the good news is, White’s definitely done more than enough to find himself joining him in the Patriots Hall of Fame down the road.

2) Cam Newton is quite aware he has a battle ahead of him and he’s already heard all the comments from the fans who are hopeful to see Mac Jones unseat him this season.

The veteran quarterback told Karen Guregian of the Boston Herald that he’s letting it “feed” his focus as he continues getting ready for the season.

“Simple,” said Newton. “Feed your focus. Feed it. If the hate ain’t in my focus, I don’t feed it. I feed off of it, but I don’t feed it. It’s two different things. When I sense or when I dwell on hatred, that’s the product that’s gonna come out: rage, anger. But that’s the hatred using me, not me using the hatred. So I want to process that and make that fuel me. I don’t dwell on what a person may say, what this person may say, she say, I just use it to my advantage, and I feed what I want it to feed.”

Newton also went on to say that he’s just letting himself get wrapped up in the feeling and allowing it to keep pushing him to get better this offseason, with the goal of envisioning what he needs to do while allowing this to force him to remain focused.

“You gotta visualize yourself already there. Get your mental thought of being in that moment and taking your place there,” Newton said. “And once you get there, find so much distress that you can gutter up and feel comfortable in it. Whenever that is. And that’s how you grind. You know what I’m saying? Just take your mind to that place, stay there, get uncomfortable, and be comfortable with being in that position.”

We’ll see if it works, but the job appears to be his again, provided he takes care of business.  Either way, it’s definitely going to make for an interesting camp.

3) According to Ben Volin of the Boston Globe, there are apparently four teams in the NFL who are looking to build new stadiums, with the Bills being among the clubs looking to upgrade their current home fields.

Buffalo’s lease with Highmark Stadium expires in 2023, with the current hope of potentially building a new stadium that might open in either 2025 or ’26.  The question there may be how that might play out, largely because the club plans on building the new venue on the exact same site, which would force the Bills to play games temporarily in other venues.

Possible sites could reportedly include Penn State, or maybe even Toronto.  The latter seems like an opportunity the league would love, since the NFL is obviously big on bringing their product to other countries and trying to build interest.

Meanwhile, the other three teams are Washington, Carolina and Chicago.  Washington Football Team owner Daniel Snyder is apparently pondering sites in Maryland and Virginia to possibly replace FedEx Field, while Panthers owner David Tepper wants to replace his 25-year-old stadium but says he won’t do it “alone” and is expecting taxpayers to also help fund it.

As for the Bears, they’ve been pondering taking the team out of the city and building it in the suburbs, which seems to be where things may be headed.  They’ve recently submitted a bid to buy the Arlington Park Reacecourse and that seems to be where their final destination could ultimately be.

4) Former Broncos receiver Demaryius Thomas announced his retirement Monday, officially calling it quits as he looks to begin his life after football.

Thomas said that he feels fortunate that he’s moving on while still being healthy, and he’s glad he was able to play as long as he did.

“It was a tough decision, a real tough decision,” Thomas said. “… Always as a kid or always when I did something, it was always [giving] my best to go and go and go. And football was my go. Every year I tried to get better and better, and I knew I was aging, of course. It was something tough, but I’m grateful I did 10, 11 years. I’m so grateful for that and now I can move on. I’m happy, I’m healthy. And now I can try to find my next itch.”

Thomas played 8 1/2 seasons in Denver before being traded to Houston.  He also joined New England in 2019 before the Patriots traded him to the Jets, which at the time ended up being somewhat of a contentious situation.

The now-former receiver finished his career with 724 receptions for 9,763 yards and 63 TDs.

Taylor, who was all over the Patriots after the last “camera gate”, is seeing his name being brought up as a potential coach on the hot seat if the Bengals don’t bounce back this season.

CBS Sports recently ranked all 32 NFL head coaches and placed Taylor at #30, believing that this is a make-or-break year for him.

“You certainly can’t put all the blame for the Bengals’ struggles on Taylor, who lost No. 1 pick Joe Burrow to injury in 2020,” Cody Benjamin wrote. “But two years in, we’ve yet to see many reasons why Cincy should be drooling at the possibility of another Sean McVay emerging here. Whether or not it’s fair, Taylor is primed to be cut loose if the Bengals don’t hit at least eight or nine wins in 2021.”

We’ll wait and see how it plays out but for a Division that is becoming one of the more highly-contested ones in the NFL, it’s definitely going to be up to Taylor to try and make sure the rise that Cincinnati seemed like they were about to experience with Burrow continues this season.