6 years ago at 9:44 am ET
Follow @IanLogue
Posted Under: Patriots Commentary 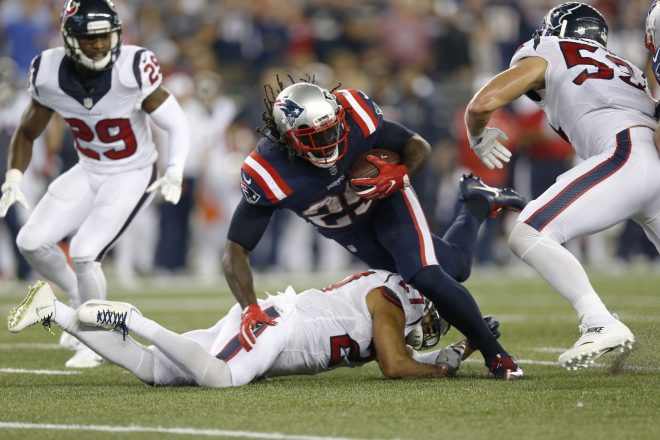 Winning in the postseason is never easy no matter who you are and now that the Texans have one win under their belt, fans of the team in Houston are a little bit limited with their optimism considering the next obstacle has the New England Patriots as their next opponent.

Coming into Saturday night’s contest the Texans are heavy underdogs, with, according to the latest numbers, the Patriots being favored by 18-points.  Down in Houston they know what they’re up against and how things have gone historically between the two teams and they’re hoping for their team to at least make it respectable.

Listening to Sports 610 Radio out of Houston Tuesday morning, they’re comparing this game to the Rocky vs Apollo Creed battle where Rocky didn’t win, but he at least went the distance against a tough fighter.  That’s essentially the approach that fans are taking, with most hoping their team can hang with New England long enough to be in it at the end with a shot at coming away with a victory.

They have reason to be optimistic, especially since the Texans looked like an entirely different team in their win over Oakland last weekend, scoring touchdowns in all three trips to the red zone. Quarterback Brock Osweiler also didn’t throw an interception, finishing 14-of-25 for 168-yards and a touchdown in the victory.

All you need to do is look back at some of this past weekend’s games to see that one of the biggest keys to several outcomes was simply the fact that it came down to the other team making fewer mistakes, which in a couple of those games were critical.  That’s typically been a strength of the Patriots as they’re generally not a team that beats themselves and as we remember from last season, most notably their loss to the Eagles, when it does occur, that’s when bad things happen.

The Texans know first-hand how big those types of mistakes are, especially considering that special teams play was a big problem during their 27-0 loss in Foxboro where they lost two fumbles on kickoffs which led to 14 points for the Patriots.

For them to have a chance, Houston is going to have to run the ball well (they put up a combined 123-yards rushing against the Raiders) to keep Tom Brady and the offense off the field, as well as force a couple of turnovers and then capitalize. On the road at Gillette Stadium against Brady and Bill Belichick, that’s certainly a daunting task that obviously won’t be easy.

Head coach Bill O’Brien, who is a former offensive coordinator here in New England, knows how critical that is and that’s why he believes not making mistakes is going to be important if they hope to have any shot at advancing.

“One of the big things for us is we have to play good, sound, fundamental football,” O’Brien said. “They’re the type of team that if you make too many mistakes, they’re going to bury you.

“So we have to do a good job — not to be perfect — but we have to limit our mistakes regardless of defense, offense or special teams.”

If they can, maybe they’ll have a shot at being in this game.  If the tables were flipped, the attitude would be similar here in New England and Patriots fans only need to go back to the postseason coming off the 2001 regular season where it all started to know what that feels like.

As everyone here said back then, anything can happen in a game like this. And that’s exactly what fans in Houston are hoping for.