5 years ago at 9:27 pm ET
Follow @bob_george
Posted Under: Uncategorized 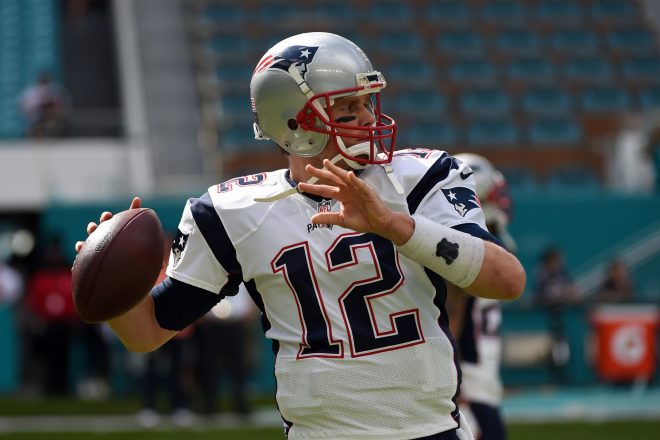 MIAMI GARDENS, Fla. – Try to forget the fact that if the Patriots had only played like this last year, they could be looking at a possible three straight Super Bowl wins.

Unlike the putrid 20-10 loss here at Hard Rock Stadium in Miami last year, the 2016 Patriots hit the Miami Dolphins hard and never lost sight of the big picture and the big goals. Except for a stretch of two Miami touchdown drives around halftime, the Patriots strutted their superiority and beat the Dolphins 35-14 to clinch the top playoff seed in the AFC and secure home field advantage for the playoffs. The Patriots have two weeks to prepare for some playoff team other than Pittsburgh, and they will be at home for that game and a possible AFC Championship Game a week later.

This is the sixth time in franchise history that the Patriots are the top playoff seed. In four of the previous five such seasons, the Patriots advanced to the Super Bowl, with the unlikely 2010 loss at home to the Jets the only blemish. They were the top seed as recently as 2014, where they became Super Bowl champions at season’s end.

This was the first win by the Patriots in Miami since 2012. Despite 79-degree weather with 74% humidity, which is sultry even for Miami in December, the Patriots were able to function on all eight cylinders for most of the game. Field conditions were an issue, as the field had been used on Friday night for the Orange Bowl game, but as Bill Belichick told CBS Sports, “Both teams have to deal with it.”

Two monster plays more or less decided this game for the Patriots. Midway through the third quarter, with Miami trailing only 20-14 and with all the momentum, the Patriots had the ball at their own 23 facing third down and seven, the drive seemingly being stalled thanks to a holding call on Shaq Mason. Tom Brady found Julian Edelman on a quick slant in on the left side and Edelman made the catch for a first down.

And a bit more.

At the point of attack, Bacarri Rambo whiffed on an easy tackle and Edelman took off towards the middle of the field. A few more yards downfield, Tony Lippett had an angle to stop Edelman near midfield. But new wideout Michael Floyd moved in and clobbered Lippett, springing Edelman free for a 77-yard touchdown. It was the longest touchdown catch of Edelman’s career. Lippett was hit so hard by Floyd that concussion protocol was conducted on him after he was helped off the field. Lippett came in on the next series.

It was still 27-14 Patriots going into the fourth quarter. Miami took possession at their own 32 on their first possession of the fourth quarter and drove to the Patriot 9 in eight plays. On second and goal at the 9, backup quarterback Matt Moore dropped back and hit Damien Williams in the left flat at about the five-yard line. Devin McCourty closed fast and managed to punch the ball out of Williams’ hands. The ball rolled backwards and was covered by Shea McClellin. He took the fumble and ran 69 yards to the Miami 18. McClellin would have scored if he had any foot speed at all, but the Patriots clinched the win six plays later when LeGarrette Blount plowed in for a touchdown from one yard out.

Right from the get go, the Patriots showed that this game would not be a repeat of 2015, where the Patriots sat regulars and used the game as a means to work on the run game. The Patriots scored touchdowns on their first two offensive possessions, the first on a 13-play, 75-yard drive capped off by a touchdown pass from Brady to Marcellus Bennett from 2 yards out off a beautiful play fake which completely fooled the Miami linebackers.

The second drive went only 45 yards and five plays. The fifth play will have Patriot Nation abuzz for the next two weeks. Floyd caught a quick slant on the left side at the Miami 14, cut back inside and dragged three defenders into the end zone for a touchdown. It was Floyd’s first touchdown as a Patriot, and that play, combined with the hard hit on Lippett will be well received by both the fan base and the players and coaches. Floyd, who became infamous with his battles with alcoholism, bought himself a ton of goodwill with his performance on Sunday.

Brady finished 25 of 33 passing for 276 yards, three touchdowns and a 130.4 passer rating. He finished the season with 28 touchdown passes and only two interceptions, setting a new NFL record for touchdown to interception ratio (Nick Foles was 27-2 in 2013). Brady will at least contend for the MVP award this season, and the fact that he is at least in the conversation despite missing the first four games of the season due to the DeflateGate suspension is nothing short of remarkable.

Edelman was obviously the receiving leader with eight catches for 155 yards. Blount and Dion Lewis combined for 99 yards rushing, averaging just over four yards a carry. Unlike other visits to Miami where the Dolphin defense rises up and plays its best game of the season, the Patriots were able to sustain many good drives all afternoon long. Ryan Allen punted only three times on the afternoon, his first punt coming with just over three minutes left in the third quarter.

The Patriot defense forced two Miami turnovers. In addition to the Williams fumble, Logan Ryan had an interception in the first quarter just two plays after the Floyd touchdown. Moore was flushed out of the pocket and threw a terrible pass down the left sideline towards Dion Sims. Ryan was right there to make the interception.

The Patriots now play their familiar game of wait and see who they will play next. Miami will head to Pittsburgh next week, and Oakland, running out of healthy quarterbacks and the victim of some awful misfortune, will head to Houston. Only Pittsburgh, the three seed, cannot possibly play at Gillette Stadium in two weeks. The winner of Oakland-Houston will head to Foxborough in two weeks barring an unheard of Miami upset at Pittsburgh. The Patriots will benefit in that they will not have to face Kansas City and Pittsburgh in consecutive weeks as had been expected; those two teams will more than likely face each other in the Divisional round and be a little beat up if the winner does indeed head to Foxborough in three weeks.

The Patriots could care less right now who they will play. They have home cooking throughout the month of January. The Patriots can now celebrate New Year’s Day with, hopefully, super dreams for 2017.