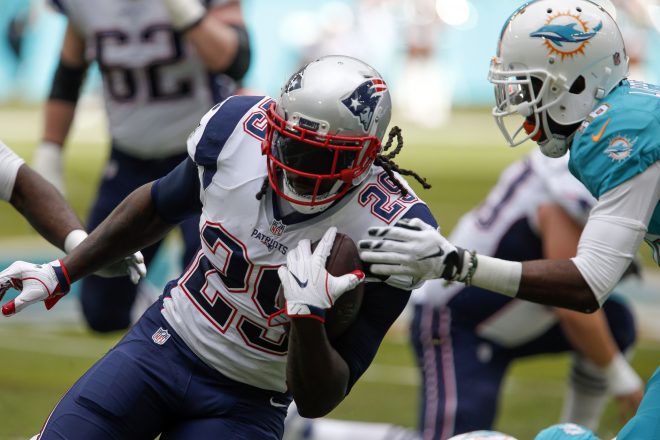 LeGarrette Blount is no stranger to opposing players taking cheap shots at him, and on Sunday down in Miami he got locked up in a heated exchange with Ndamukong Suh over a similar incident.

The play occurred late in the game after the Patriots had extended their lead to 35-14.  With Jimmy Garoppolo now in the game, the Patriots ran Blount with just under four-minutes left to try and start running out the clock.  As Blount was coming to his feet following a first-down carry, Suh shoved him, which caused Blount to go after him.

It escalated from there, with Suh taking a swing at Bount after the running back ripped his helmet off.  An official stepped in-between the two players and pushed Suh out of the fray, but threw a flag on Blount for unsportsmanlike conduct.

Blount got he last laugh, as the Patriots locked up the number one seed in the AFC and now have home field throughout the postseason. At the end of the day, Blount said getting the win was the most important thing.

“At some point in time, guys have to defend themselves when he’s doing the things that he does.  Hopefully, there’s something to be said about it.  All in all, he got his ass beat.  They lost.  He ran into the locker room after the game.  We’re good.”

It’s no secret that Suh is a dirty player, especially given the shot he took at Brady in last year’s finale, and after what we saw Sunday, it looks like Blount doesn’t think very highly of him either.