Heading into Sunday’s showdown against Miami, one name that has to quietly be in the back of any Patriots fans minds is Ndamukong Suh, and not necessarily just because of the challenge he presents defensively for the Dolphins.

Anyone who has followed Suh over the years knows that he’s certainly a player who likes to push the limits as it pertains to his physical play, and anyone who recalls last January’s meeting in Miami likely remembers a hit that left everyone gasping after he took a diving shot at Tom Brady’s legs.

The hit came as Suh got around Marcus Cannon in the second quarter, who reached out to try and stop him and Suh dove toward Brady as he was going down and buckled his legs, bending him backwards and nearly in half, with the hit looking pretty horrific when it happened.

Brady fortunately escaped without a severe injury despite hobbling a bit out of the stadium after the game was over, telling reporters, “I’m pretty sore, but I’ll be all right.”

That play happened in a game that meant little to the Dolphins, who finished the 2015 season with a record of 6-10 and came into that meeting having lost three straight.  This time around, Miami is heading into the postseason with the potential of facing their AFC East rival down the road, which makes the stakes even higher.

The concern there will be whether or not Suh may take matters into his own hands in this match-up knowing what’s at stake now that he’s got an opportunity to play further into January.  He’s got plenty of experience against New England, having faced them in each season over the past three years, including his final year in Detroit back in 2014 in a 34-9 loss with the Lions.  Over that span he’s been part of a win just once, going 1-3 with the lone win coming in Miami’s 20-10 win in last year’s finale.  Suh hit Brady twice in that game and finished with half a sack.

Suh said in an interview back in 2015 that he admires Brady and called him “just a good dude”.

“I just think our personal interactions with each other, and watching him play and his craft, I admire it,” Suh said in the interview. “At the end of the day, it’s my job to tear that down and not allow him to be successful. But I just have a mutual respect for him. Every single time we have come across each other, whether it is on the field or in person, he’s just a good dude.” 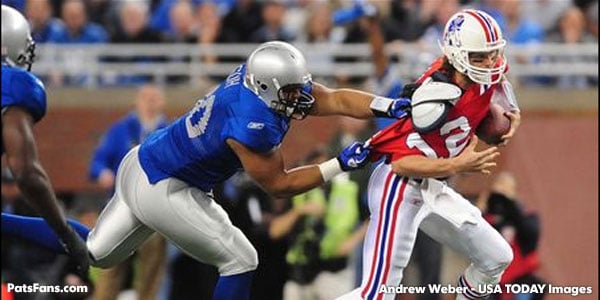 Suh has plenty of motivation to get after Brady this Sunday. (USA TODAY Images)

That obviously didn’t keep him from from hitting him low last season, and the motivation now will likely be to do whatever it takes to win football games.  Beating New England would certainly make a strong statement and as far as he’s concerned, Suh knows what Miami is up against.  He said this week the plan will be to first stop LeGarrette Blount, along with trying to get after Brady and slow the Patriots’ offense down.

“I think they have a pretty much similar scheme as they’ve had in the last couple of years,” said Suh via the Palm Beach Post.  “I’ve pretty much played them every single year of my career, so they’re pretty consistent; but at the end of the day, they have their running game going pretty well, especially with LaGarrette Blount. So we have to first and foremost stop that, and then obviously when Tom (Brady) is back there and throwing the ball, we have to make sure we touch him and get after him so he’s uncomfortable.”

After already losing to the Patriots back in Week 2, things have certainly changed for Miami after they’ve managed to win 9 of their last 10 games, including three in a row.  Their last two wins have come on the road, and Sunday’s match-up will be Miami’s first home game since they played the Cardinals back on December 11th.  It’s a definite advantage for the Dolphins, especially since the Patriots have had their fair share of problems in Miami, with Brady sitting with a career record of 6-8 there, with New England’s last victory coming back in 2012.

That likely will be another tough feat for the Patriots again this week.  With playoff aspirations now motivating the Dolphins, Suh said closing this week out with a win is a priority.

“I’ve said this from the very beginning. You have to protect your home. You always want to be winning when you’re at home and obviously go on the road and still win when you can, because it’s very tough to do that. But when you’re at home, you should definitely be winning and protecting that.”

Hopefully for the Patriots, they’ll also protect Brady and keep Suh away from him this weekend.