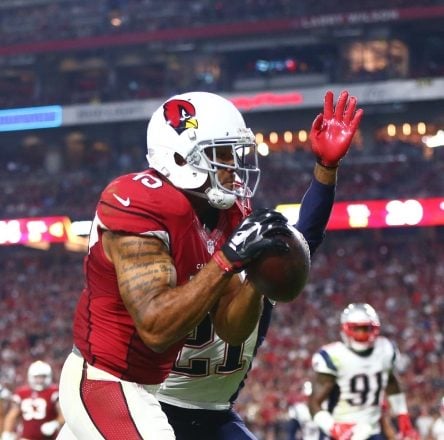 Late season injuries have been a problem for the Patriots in years past but heading into Sunday’s finale in Miami, New England has an extra player who might help them avoid any issues as they try and lock up the number one seed in the AFC.

Michael Floyd’s bad judgement looks like it may pay dividends on Sunday for New England, who appears to be on the verge of being without Malcolm Mitchell after the receiver has missed time this week with a knee injury.

Mitchell’s absence is significant from the standpoint that he matches only Martellus Bennett in terms of toughness, which means that if the rookie wideout sits out, he’s clearly hurt given the way he’s gutted through past injuries.

Without Mitchell, the Patriots find themselves down yet another receiver after losing Danny Amendola back in Week 13 with an ankle injury.  The veteran receiver was spotted this week without a walking boot and without a limp, which is a positive sign heading into the postseason.  But with one game to go, the Patriots still have to get through the surging Dolphins, who have scored 34-points in each of their last two games and should present a big challenge for New England on Sunday.

That should mean that Floyd will likely be the number three receiver behind Julian Edelman and Chris Hogan, which is a terrific opportunity for him to see more targets as he continues getting comfortable with the offense.  He’s not nervous, and claims that he’ll be ready to go.

“It’s not like my first time playing,” said Floyd via the Boston Herald. “There won’t be any nerves. I got a taste of how it is last game, and I’ll be ready.”

Floyd did a good job in limited action against the Jets, despite finishing the game with just one reception on two targets.  But his other incompletion was still impressive, with Floyd making a leaping grab on a deep throw up the sideline where he made a great catch, but just couldn’t get both feet down.  He showed terrific athleticism and it was a snapshot of his potential in this offense.

If Floyd can make plays like that and get them right, those are the types of moments New England will need down the stretch.  As we saw in 2014, it was timely plays to extend drives and score that got them over the hump compared to past seasons when they came up just short.  Honestly, Floyd doesn’t need to be a star.  He just needs to be better than the guy across from him and another player Tom Brady can count on when it matters.

For now, that’s all he’s trying to be and his goal is just to contribute to the team that gave him a shot at redemption.

“Whatever the plays they give me out there to practice, I’m going to execute,” Floyd said. “That’s all you can ask for. Just being new to this system, this team, I’m here to help in any way possible.”

READ NEXT:
Patriots – Dolphins II Keys, Who Has the Razor’s Edge?
Posted Under: Patriots Commentary