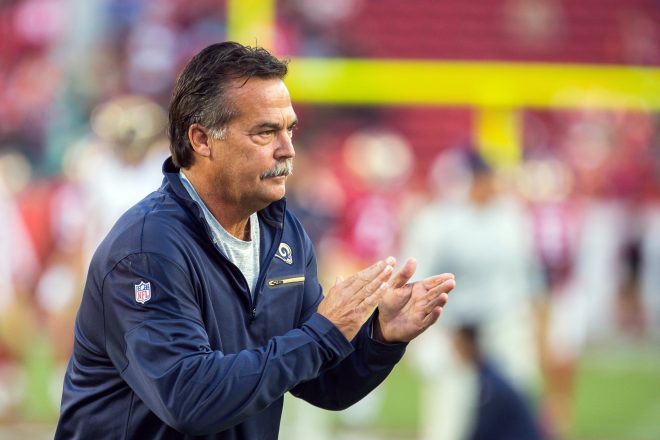 Sometimes coaches and players do things that make you realize why they’re no longer successful and when they do, it’s generally pretty easy to spot.

Take for instance, Rams head coach Jeff Fisher, who has seemingly been a rival of Bill Belichick likely thanks to Fisher’s comments over the years about New England as part of the competition committee.

Fisher has insinuated the Patriots and Belichick are cheaters and break the rules, citing the similar “integrity of the game” nonsense that Roger Goodell likes to throw out there. For Belichick, he’s handled it well any time it’s come up. He’s said nothing, and in their last two meetings, Belichick went out and beat Fisher’s teams 59-0 and 45-7.

But those performances started with studying film and getting his club prepared, which we found out on Wednesday shows the sharp contrast between the two coaches.

If you listen to Belichick’s Wednesday press conferences each week as he discusses opposing teams and their players, he’ll go down the list of names of guys you might have not even heard of, while also citing multiple examples of plays they’ve made so far this season, and potentially even games from past seasons. That comes from hours of watching film and advanced scouting, which is what good coaches do.

Take Wednesday for example, where Belichick ran down what the Patriots will be up against this weekend against the Rams.

“I’d start with saying a very talented team. They have a lot of very good players, a lot of explosive players in all three phases of the game,” said Belichick.  “Let’s start with the kicking game; I mean [Johnny] Hekker is a tremendous weapon. This guy looks like as good a player as I’ve ever seen at that position. He’s a tremendous weapon in his ability to punt the ball, punt it inside the 20, directional kick it, involved in fakes, can throw, can run, very athletic. They have great coverage players on both punts and kickoffs.”

“They have speed guys. They have size guys, linebackers, running backs, receivers, [defensive backs], so they really cover it across the board. Obviously, two very explosive returners in [Benny] Cunningham and [Tavon] Austin so the kicking game is going to be a tough matchup for any team against them and they do a lot. They have a lot of scheme. They have a lot of plays that you have to work on so they put a lot of pressure on you there. They have very good players. They’re very explosive in that phase of the game.”

“Offensively up front [they’re] long, big, long offensive linemen. They use a lot of misdirection scheme. Great skill players, great backs, [Todd] Gurley, Cunningham. [Lance] Kendricks – a very good tight end, very productive, a good guy for them in the red-area, third-down, clutch situations. He’s made a lot of big plays. He’s had a great career there. It looks like he’s going to break a lot of Ram records before it’s over. Then of course very good players at the skill positions. [Kenny] Britt and [Brian] Quick are tough. They make a lot of big plays. Britt’s had a great year, strong, good hands, run after the catch. Austin of course is a dynamic player, so they really have a lot of threats offensively with a big, long offensive line.”

And Belichick was just getting started.

“[Jared] Goff I thought did a lot of good things last week, really the last couple of weeks,” he continued. “In the New Orleans game, first drive, two-minute drive – he handled that with a lot of poise. [He] played well in the red-area so he’s obviously a very talented player as well. Defensively it starts up front. A very good defensive line; [Aaron] Donald, [Robert] Quinn – a very disruptive group. They have a lot of negative plays. They make more negative plays than anybody so that’ll be a big challenge for us. They’re fast at linebacker with [Mark] Barron. They’re real big at safety. Those guys are big players, big hitters. [T.J.] McDonald is a very aggressive guy, long. Outside with Trumaine Johnson and so just overall I’d say a very talented group at every position. A lot of potentially explosive plays or explosive players that if you don’t handle them they could do a lot of damage in a hurry.”

“A young team that’s fast, that’s aggressive, that’s played hard. They obviously didn’t have a great day in New Orleans like they did in the opener against San Francisco, but I’d say other than that they’ve been in a lot of tough games. They’ve won some of those, have won some of them, but they’ve been right there pretty much every week. An impressive win over the Jets, Arizona, Tampa, Seattle, so they’re a good football team.”

All of that knowledge comes with hours of film review, and this isn’t even Monday.  This is mid-week on a Wednesday leading up to Sunday’s match-up so by now, he’s completely immersed with getting familiar with the Rams’ football team. 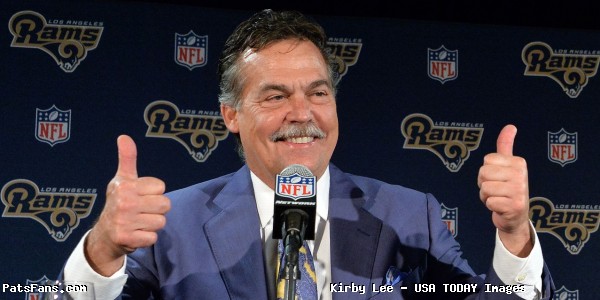 Meanwhile, out in Los Angeles where Fisher is likely stewing in his dislike of Belichick and the Patriots’ supposed cheating ways, he jumped on a conference call with the New England media and tried to convince them that he’s been studying up on the Patriots’ roster.

“Well, they’re all different,” Fisher said, as he talked about the Patriots running backs. “I have a place in my heart for LeGarrette [Blount], because I gave him a start, and I have great respect for him. He’s a big back and he’s hard to get down and then as they rotate through, different guys play in different situations and they do a good job with it. He knows where the ball’s going to go, and the guys are very, very disciplined.”

Then came the fun part.

“I’ve been impressed with Brandon and what he’s done out of the backfield. You’ve got to deal with him, in addition to Danny. You’ve just got playmakers all around, so we have to play sound defense.”

Brandon Bolden is the only logical explanation about who he might be talking about, and you have to wonder what games Fisher has been watching.  Bolden hasn’t had a carry since Week 1 in Arizona and hasn’t had a reception since Week 4 against the Bills.

As for Danny, unless he’s talking about Amendola, who isn’t exactly a threat out of the backfield, he may not have gotten the memo that former Patriot Danny Woodhead has been a San Diego Charger for several years now.

He’s like one of those people who you can make up something about a book or a movie you know they didn’t read or watch, and listen to them lie about it to try and be part of the conversation.  Instead, Fisher revealed he hasn’t watched much film of this team coming into this week and if he did, he obviously wasn’t really paying attention.

If you’re a head of a company, which Fisher essentially is for the Rams as their head coach, people above him should have been completely shocked to hear those words come out of his mouth today but at least they now have a real explanation for why Los Angeles is 4-7.

In the past, Fisher has insinuated that the Patriots have been successful for reasons other than hard work and talent. Wednesday was a reminder of the real reason why Belichick’s team remain perennial winners and why Fisher remains a mediocre coach, leaving the Rams in the position they’re currently stuck in.

The media essentially caught him completely napping, and for a guy the Rams are paying just $500,000 less than Belichick (Fisher’s salary is a reported $7-million, Belichick’s is a reported $7.5-million),  firing Fisher over those comments isn’t an unreasonable thought.  Expectations in the league are high and there’s no excuse to not even know the names of the players who he needs to prepare his team to defend.  That tells you he’s not doing the work and given the compensation, it’s inexcusable.  It should also cost him his job.

Although hopefully, if it actually came to that, they’ll at least wait until after Sunday to do it.