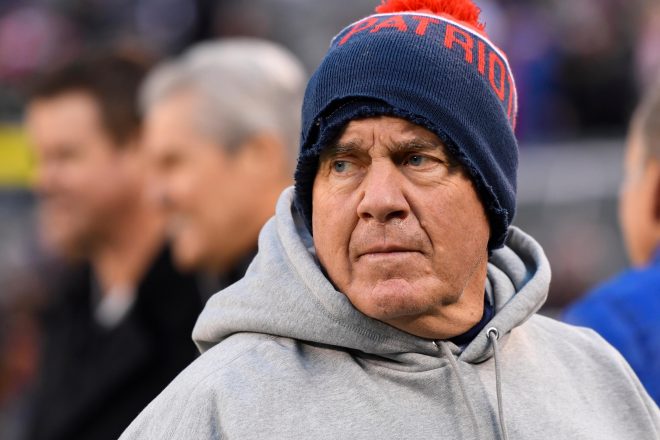 Again, it’s always great to win a Division game on the road. This certainly is a good win for our football team. I think as Tom mentioned, it was kind of a long week with the West Coast trip, Thanksgiving and all that.  I thought our players did a really good job though of working through it, fighting through it, preparing hard.  I thought the last seven minutes of the game, or whatever it was, we did a lot of good things.  We played our best football when it counted the most, so that’s always important.  Some good situational football, just some good solid football there in the last half of the fourth quarter.  Good to win a Division game on the road, proud of the way our team competed.  It didn’t start well, but we hung in there, battled all the way and, like I said, made the plays we needed to make at the end so that’s really what it’s all about.

On what makes Tom Brady so great:

He’s a good player.  We’ve got a lot of good players.  A lot of guys compete hard and like I said, they all worked hard, we got contributions from all three units today, offense, defense, special teams.  We got contributions from a lot of players, we turned the ball over, we ran it, we threw it, we defended, we covered kicks, we returned them.  So I thought a lot of guys stepped up and competed.  Tom did a great job, but so did the other 45 guys today.  Coaching staff did a good job.  Again it’s a tough week week for Matt [Patricia], Joe [Judge], Josh [McDaniels], those guys to pull it all together after last week’s game on going on, not a short week…but it was kind of a short week.  It’s a hard team to prepare for.  The Jets, they do a good job.  They’re not easy, they’ve got a lot of good players, a lot of tough guys to cover, a lot of tough guys to block.  Like I said though, I thought we hung in there, and got contributions from all three phases of the game.  It was good complimentary football.

On his thoughts on Chris Long’s turnover to close it out and how the defense finished:

That was what we needed to do.  Malcolm [Butler] had a big play on the strip.  Chris Long, and the blocked field goal, kept points off the board there, so those were all big plays for us.  We had a few stops on third down that we needed at different points in the game.  Not as many as we would liked to have had, but we made some key ones.  Again, they made some great catches.  I mean, Fitzpatrick, Enunwah, Marshall, I mean those guys made some great plays where were in pretty good position but it was just too good of a throw against a big target with great hands.  You’ve got to give them credit on some of those too.

On the two big catches by Malcolm Mitchell and how much progress he’s seen from him:

Malcolm’s done a good job for us all year, all the way back into the spring, the OTAs and all the way through training camp.  He missed some time in camp after he got injured but he’s always hung with it.  Mentally he’s stayed on top of it and I think he’s just getting a little bit better every week.  It’s a long season for the rookies. We’ve had a lot of guys like Malcolm, like Joe [Thuney], like Vincent [Valentine], like Jon Jones, guys like that that really come through for us week after week and Malcolm had some big plays today.

On how Rob Gronkowski is:

On the changes they made that allowed them to win the game:

Well, I think just in general as the game goes along you get little better feel for what they’re doing as the game goes.  I think our players, obviously, give them the credit, they’re the ones that made the plays.  Josh, Matt, tried to mix things up there at the end of the game.  But in the end it’s the players that made the plays, Chris [Long], Tom [Brady], James [White], Dion [Lewis], LG [LeGarrette Blount] and all those guys, the offensive and defensive line.  It was a good team effort.

On Tom Brady’s toughness and the example it sets for the rest of the team:

I mean, he did a good job.  Tom worked hard this week, as he said, I think a lot of guys, I mean look, it’s Week 11.  I don’t think anybody’s feeling fresh as a daisy.  Again, coming off the San Francisco trip and all that, the Seattle game the week before and so forth, it’s a grind.  But we’ve just got to fight through it.  Tom’s got great mental toughness and so do a lot of guys on the team, but they’re dealing with something too.

On what his impressions were on the play of Malcom Brown, especially in the second half:

Better in the second half.  We had our moments.  At times we had a little too much space in there.  But I mean, overall I thought we were competitive in the running game.  Didn’t give up a lot of big plays.  Had a few no gains, had a negative play early in the game from Elandon [Roberts].  But we were able to get them in some 3rd-and-9s, 3rd-and-10s and those kind of situations where they weren’t able to run the ball and make it 3rd-and-3, 3rd-and-4 which they’re tough to defend there.  [Ryan] Fitzpatrick got us on the scramble, they go in those five receiver sets, and you know, it’s just a lot to defend.  I thought we were competitive in the running game.  [Alan] Branch, as usual, does a good job of either eating up a couple blockers in there or piling things up inside.  So I thought he did some of that too.  Malcom and Alan both, just playing with two really defensive big linemen in there, it puts a lot of pressure on them but those guys are hanging in there pretty good.

On the fact Tom Brady wants to play through everything but given that he missed some practices and missed some throws he usually makes, whether or not there was any thought to going to Jimmy Garoppolo:

Our thoughts are just to win the game.

On the significance of Tom Brady being the starting quarterback to win 200 games, tying Peyton Manning’s record:

Well, I mean that says a lot about him and what he’s been able to do for this franchise.  That’s what it’s all about.  That’s what a quarterback’s job is, is to win.  He’s done a great job of that.  I think today was a good example of not turning the ball over, there were some good situational plays that came up that don’t show up on the stats sheet, like a 4th-and-1 offside, things like that, that are plays that you need for your team to win.  Tom does a great job of that.  He’s as good of a situational as I’ve ever been around.  So the quarterback’s job is to win and he’s won a lot.  That’s good, I’m glad he’s our quarterback.

On James White’s 4th down pick up and if he’s shown noticeable improvement after contact:

He’s been pretty good.  Going back to last year’s preseason games, he’s a hard guy to tackle out there.  I thought he really, starting with the 2015 preseason and all the way through the year and then this year, he’s a hard guy to get down out there if he’s got some space to work with.  We’ve seen him run screen passess and plays out in the flat and things like that.  I mean, I don’t know if he’s gotten better or not.  He’s pretty good out there and people have a hard time with him or even if they get him, he’s usually able to get enough for that first down.  We’ve been very fortunate at that position between Kevin [Faulk], Shane [Vereen] and now James, we’ve gotten a lot of production at that kind of sub-back position.  Those guys, they don’t always catch the ball, they have to blitz-pickup, and sometimes we’re in empty and sometimes they’re in the backfield and sometimes they’re running receiver-type routes, which takes a lot of extra work.  But that position’s been good for us.  James, he does a great job and Tom’s certainly been able to utilize his skills as he did with the other two players.

On the first quarter, prior to the 51-yard field goal by Folk, his decision whether or not to decline the penalty:

Yeah, that could have gone either way, probably.  It’s a 51-yard field goal, so…

On at the end of the second quarter after Chris Hogan’s first down on if he thought about clocking the football, or using the final timeout, or if he was thinking about saving that timeout for Stephen Gostkowski:

You usually want to try to save the timeout for the field goal.  We tried to press it a little bit, we went with the four verticals and got a close play with Malcolm [Mitchell] there in the end zone.  So we thought we could press it and take a shot there rather than huddle up and let everybody get organized and do that and then by the time we did it, we were kind of low on time there, didn’t really want to take the time-out and ice our own kicker.  I mean, we’ve got to do a little better in that situation.

On what it tells him about his team when they don’t play their best football but came through at the end of the game to win the game:

Well, I mean I think it says a lot about our team and their resiliency and mental toughness and their ability to focus and execute under pressure.  Look, a lot of games in this league come down to the last series, a couple plays, whatever it is.  You battle it out there for 54, 55, 59 minutes and it comes down to one or two plays that are critical that they’re executed well and that they’re designed well and that we have a chance to do it.  We had a lot of those come up and I thought we handled those pretty well.  Again, there’s a lot of things that we can improve on from this game, we’ll talk about those and work on them, try to get them better for Los Angeles this week.