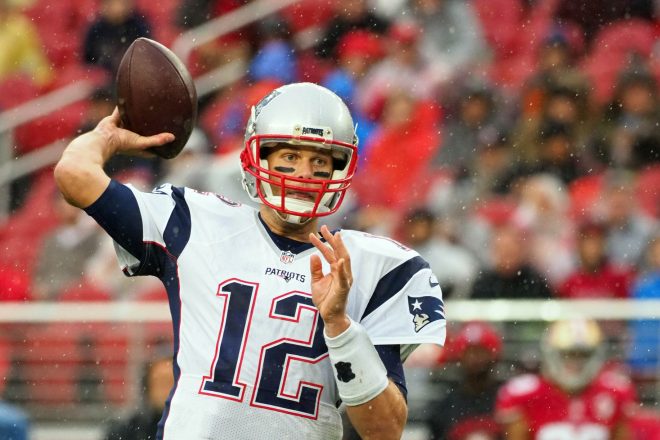 SANTA CLARA, Calif. – Levi’s Stadium on Sunday was more about the crowd chanting for Tom Brady than it was for cheering on the home team.

And rightfully so. 25 miles to the north up US 101, Brady grew up in San Mateo and went to high school at Junipero Serra High School. Suffice it to say that a lot of the San Mateo folk, along with the usual contingent of Boston fans in the Bay Area that go to Red Sox games in Oakland, were there to see Brady finally play in his home area after 17 years in the NFL.

Brady, who missed out on the chance to play in the Bay Area in 2008 thanks to the knee injury he suffered in the opener that year, lit up the 49ers for 280 yards and four touchdowns. The Patriots won, 30-17, their fourth win in the last five meetings over the San Franciscans but only their fifth win ever against this franchise. Brady, who as a four-year-old attended the famous Dwight Clark “The Catch” game in January of 1982, came home and showed everyone in San Mateo, San Jose, San Francisco, San Whatever, that he is the greatest to ever play the position.

The game was much tighter than most any casual football fan might have predicted, and was only 13-10 Patriots entering the fourth quarter. But Brady was able to snap the Patriots out of their doldrums, leading the Patriots to a 17-0 run on their way to victory. The Patriots were able to wear down the downtrodden 49ers in the fourth quarter, a late touchdown drive notwithstanding.

Brady celebrated more than his homecoming. The win was the 199th of his NFL career, tying him with Brett Favre for second place all time. In first place is Peyton Manning, with only one more win (200). The Patriots play at the Jets next week, and the Patriots will be favored to win.

Brady threw four touchdown passes to four different receivers. He found Julian Edelman in the right corner of the end zone for a four-yard touchdown on their first offensive possession of the game. On the first play of the second quarter, on first and goal at the nine, Brady dropped back, pump faked right to Edelman and dumped a pass in the left flat to James White, who took it to the house. On the first play of the fourth quarter, on second and goal at the five, Brady shook off a fierce pass rush and lobbed a wobbly pass to Danny Amendola, who slipped into a wide-open area in the end zone. His prettiest pass of the game was on the next drive, where he threaded the needle and somehow found Malcolm Mitchell up the right seam. Mitchell scampered 56 yards for a game-clinching touchdown.

Brady’s final passing numbers were 24 of 40 for 280 yards and a 114.6 passer rating. Edelman was his old sweet self with eight receptions, while Mitchell had 98 yards receiving. Against the worst run defense in the league, LeGarrette Blount rushed for 124 yards on 19 carries. He had a 44-yard burst off left tackle in the first quarter, and he also had a 34-yard touchdown run in the second quarter which was called back thanks to a holding call on Nate Solder.

Dion Lewis made his return as a Patriot, and chipped in with 49 all-purpose yards, and showed flashes of what made him so effective last year. James White managed 63 receiving yards, making sure that Bill Belichick knows he is still around in case he has to cede plays and touches to Lewis.

If the Patriots have a nagging concern, it remains the defense. Despite the convincing win, the defense was still gashed far too often against a 1-8 team. Colin Kaepernick, who quarterbacked the 49ers to a 41-34 win at Foxborough four years ago, played a decent game until running out of gas and options in the fourth quarter. He was 16 of 30 passing for 206 yards and two touchdowns, but was sacked five times by the Patriot defense, which did dial things up last week in the wake of their home loss last week to an injured Russell Wilson and the Seahawks.

Vince McDonald caught an 18-yard touchdown pass in the second quarter which was badly defensed by Devin McCourty. McDonald ran a crossing route and McCourty took a bad angle to the tight end. In the first quarter, reserve running back Shaun Draughn ran a wheel route, drew Dont’a Hightower in coverage, and beat him badly for a 26-yard catch on third down and nine. In the fourth quarter, Draughn ran a similar route against Elandon Roberts, and again beat the linebacker for a meaningless 13-yard touchdown pass to complete the scoring.

These three plays were probably the most regrettable of the afternoon for the Patriots. Despite a driving rainstorm for most of the game, Kaepernick was allowed to get into a rhythm for most of the middle of the game. The defense did put the clamps on the receiving corps better in the second half, but the Patriots still surrendered 299 total yards to a far inferior 49ers team on paper.

Also gnawing at Belichick are continued missed tackles and the front seven getting beat by the offensive line. Carlos Hyde had 86 yards rushing on 19 carries (4.5 yards per carry), and despite being contained early, found running lanes later on and proved very difficult at times to bring down. Kaepernick had 32 yards on four carries despite the five sacks against him.

The Patriots did not bring Jabaal Sheard on this trip, as he was a healthy scratch for this game. Some observers wonder if he is getting the same treatment as Jamie Collins got a few weeks back. His absence certainly wasn’t felt on the pass rush. But if his presence meant a tighter grip on the 49ers rushing attack, the Patriots are fortunate that they were able to overcome what may be another “message” sent by the coach.

But the Patriots won, Brady gets to hang with his hometown folk with victory ringing in his ears, and all is well in Patriot Nation. They get to come back to the land of Plymouth Rock, celebrate Thanksgiving with a nice meal, and then it’s on to the Jets. The Patriots won only for the second time ever on the road against San Francisco, a franchise which Bob Kraft once admitted he tried to build his franchise to emulate. All in all, the Patriots are mighty thankful on Sunday night.

And to the good people of the city of San Mateo, thanks for the gift of your most famous son.