6 years ago at 8:46 am ET
Follow @IanLogue
Posted Under: Uncategorized 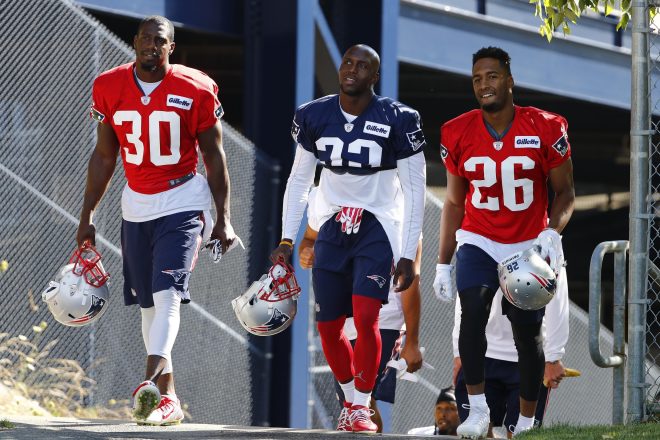 No Gronk on Wednesday – As the Patriots returned to practice on Wednesday, missing was tight end Rob Gronkowski, who is coming off of the huge hit he took from Seahawks safety Earl Thomas Sunday night.

That hit struck him in the chest, knocking him to the ground, although the tight end missed just a handful of plays and finished the game.  But following the loss it was reported he had suffered a possible punctured lung and that’s likely the obvious reason behind his absence.  According to the Boston Herald, Gronkowski also cancelled an appearance at an EA Sports event on Tuesday in New York because he was advised not to fly due to the injury.

As for the Patriots, they listed him with a “chest” injury, but all signs for now seem to indicate he likely won’t be out there in San Francisco this weekend.

Patriots Continue to Be Cautious with Lewis – Dion Lewis remains a question mark heading into this week as the Patriots continue to take it slow with bringing the running back into the offense.

Bill Belichick said on Wednesday that when a player goes down with that type of an injury, there’s a process in trying to re-acclimate them to football and for now they’re trying to decide the right time to put him out there.

“I think any time a player is coming back from missing a significant amount of time, there’s a certain buildup process,” Belichick said Wednesday ia ESPN.com. “Sometimes that accelerates, sometimes it doesn’t, sometimes it just stays on a straight-line course. It’s hard to predict how that’s going to go.

“There’s a big difference between training and playing football. You can run around a track, run up and down a hill, do 10,000 pushups and all of that. I mean, that’s great, but that’s not being out there with 21 other guys playing football. Football is football. Training is an important part and component of being ready to play football, but playing football is playing football. Especially at this time of year where you’re halfway through the season and teams have quite a bit of scheme in, both us and our opponents, we’re not just looking at kind of some basic stuff like in the beginning or the year or in preseason, which is what preseason is.”

Belichick praises Edelman’s toughness – Belichick spoke to the San Francisco media on Wednesday and talked about the toughness of Julian Edelman when asked by the reporters taking part in the conference call about the veteran receiver.

One interesting thing that came up was the fact Belichick cited a performance by Edelman during his days at Kent State against Ohio State where he finished a paltry 4-of-10 for 49 yards and an interception in a 48-3 loss where the overmatched quarterback put up a gutsy performance.

“Yeah, without a doubt,” Belichick said via NESN. “Yeah, absolutely. Just watch the Kent State-Ohio State game. That’s the only game you need to see right there. He’s playing quarterback against Ohio State and carried the ball a lot, was obviously under some pressure in the passing game in that game. Yeah, I think if you just watch that game — that game alone — I don’t think there could possibly be any question about his toughness.”

McCourty: “There’s an Urgency” to Fix the Defense – After a rough night against the Seahawks where they had a tough time stopping them from marching up and down the field, the Patriots defense likely spent a lot of time looking at film to try and figure out how to correct what right now seems to be a group that is still trying to find their way.

Safety Devin McCourty said on Wednesday that Sunday’s loss was a wake up call and a harsh reminder that they still have a lot of work to do.

“Obviously we’ve got some things we need to work on, coming off a loss,” said McCourty via CBS Boston.  “You definitely go through it a lot closer than coming off a win, but we know the things we need to work on. And it’s really about getting those things done week by week, because as the season starts to get closer to the end, you run out of time, so I think there’s an urgency to fix those things and get better at them.”

McCourty admitted there’s no quick fix, and that guys simply have to just start going out there and performing better.

By: Steve Balestrieri
“I think they’re a 12-win team,” Ninkovich said on Greg Hill’s morning show. “Listen, six months ago I thought they were a nine-win team.
13 hours ago