6 years ago at 11:49 am ET
Follow @SteveB7SFG
Posted Under: Patriots Commentary 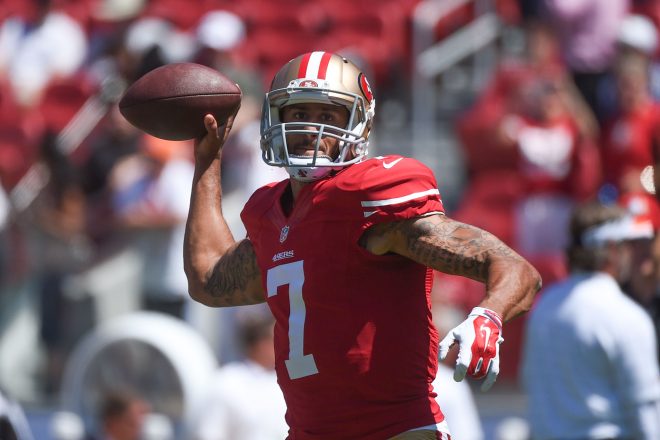 Niners Trying to Find a Spark With Chip Kelly

The Patriots head out to the West Coast after an entertaining but disappointing loss to the Seahawks on Sunday night. They’ll be taking on Chip Kelly, Colin Kaepernick, and the San Francisco 49ers. This will be the first time in his 17-year career that Tom Brady will play in front of his hometown, where he watched as a fan of Joe Montana.

The Patriots (7-2), played just well enough to lose to the Seahawks 31-24. They were sloppy with the football and turned over the ball twice and nearly had two more. The defense played soft and was picked apart by Russell Wilson. But they still nearly pulled even when they had four shots at a tying score in the final minute of the game before being stopped.

The still have a two-game lead in the division over the Dolphins who are 5-4 and are coming together and have won four in a row. The Pats are now tied for the best record in the AFC with KC and Oakland but hold the tiebreaker for the time being.

The Niners (1-8) lost on a last-minute field goal to the Arizona Cardinals 23-20. Colin Kaepernick had tied the score at 20 with a scramble and a four-yard touchdown run with just under two minutes to go. The Niners have now dropped eight straight.

Here are our Five First Impressions of the 49ers:

Kaepernick is Catching on to Chip Kelly’s System: The QB for at least the near future seems to be Colin Kaepernick for San Francisco. And after a rocky start in his first two games, he’s gaining confidence and a sense of comfort in Chip Kelly’s system.

In his last two games, he’s completed 41 of 69 passes for 608 yards with three touchdowns and one interception. And he can still scramble, in those last two games Kaepernick has run 15 times for 78 yards.

The past two weeks, unlike his nightmarish season a year ago, Kaepernick slid in the pocket away from pressure when he needed to, kept his eyes downfield and hit his targets. He’s always had a cannon for an arm and made strong, decisive, and above all, accurate throws to keep the chains moving.

And yes, he is another scrambling QB that type that typically gives the Patriots and Bill Belichick fits. With two minutes to go, Kaepernick scrambled on a read option play while facing a 3rd and 2 and rolled into the end zone for the tying score.

Before Patriots fans, pooh-pooh the idea that he can operate against them, one should recall the cold, wet December night in Gillette in 2012. Kaepernick and the Niners put up 41 points on the Patriots in a 41-34 win. He completed 14-25 for 221 yards and four touchdowns of 24, 27, 34 and 38 yards with one pick against the Patriots defense that night. He also scrambled seven times for 28 yards.

Run Defense is Horrible: The Niners have statistically the worst run defense in the NFL. Opponents have run the ball 317 times already against them for 1624 yards, good for a 5.1-yard average. The Niners are allowing a whopping 180.4 yards per game.

This may be good news for LeGarrette Blount and James White on Sunday as the Patriots will look to re-ignite their running game and keep the balance that they’ve enjoyed thus far this season.

But last week on the road against Arizona, there was also room for some confidence moving forward. The 49ers had allowed seven 100-yard rushers during the first eight weeks of the season. Facing the dangerous David Johnson who had gashed them for 157 yards in the first meeting, San Francisco held him to just 55 yards on 19 carries. And they held Arizona to just 80 yards rushing total, a full 100-yards off their season average. Just something to consider.

Kelly Has Eye to the Future: The Niners are a long way off from being a competitor for a playoff berth but with two good draft picks on the defense in Arik Armstead and DeForest Buckner, things are trending in the right direction. They have a way to go, but with the draft in the spring and perhaps the QB position being solidified behind an already good running game [more to that below], the Niners may be trending upward.

After losing their previous seven games by an average of more than 17 points, San Francisco played a tough football game and fought to the end, before just barely bowing by three to the Cardinals. While there are no “moral victories”, the team showed that they haven’t quit and are still putting in the effort for Kelly.

They’d love nothing better than to get off the schnide against the Patriots, in a game, that no one will be expecting them to win. Expect them to play hard in this one as they’ll look for a signature win on Sunday.

They are averaging 119.7 yards per game which is good for 7th in the NFL this season. Obviously, having Kaepernick back in the pocket helps the overall offense as teams must respect his ability to scramble and keep the chains moving.

Hyde is the team’s leading rusher with 443 yards and six touchdowns on 122 carries. He was just coming off a shoulder injury last week in Arizona and wasn’t his normal self, being held to just 14 yards on 13 attempts. If they want to pull an upset on the Patriots this Sunday, they’ll have to get their running game going and keep the Patriots defense closer to the box.

Phil Dawson About to Join Select Group: San Francisco kicker Phil Dawson is about to join rare company. He currently has made 399 field goals in his very solid if underrated career and his next, his 400th will mark him as only the ninth player in NFL history to make 400 or more.

Despite playing most of his career in the football equivalent of Siberia in Cleveland, he’s been remarkably steady and has a higher field goal percentage than any of the eight players that are ahead of him.

Dawson has made 11 of his 12-field goal tries in 2016. His only miss was a 53-yarder in Seattle in Week 3. His field goal accuracy in his career is a stellar 84.6 percent which is better than Adam Vinatieri. He’s made all 18 extra points. At the age of 41, he’s having one of the best years of his 14-year career despite the lack of chances. By comparison, the Philadelphia Eagles kickers have attempted 27 field goals this season.