6 years ago at 7:43 am ET
Follow @SteveB7SFG
Posted Under: Patriots Commentary 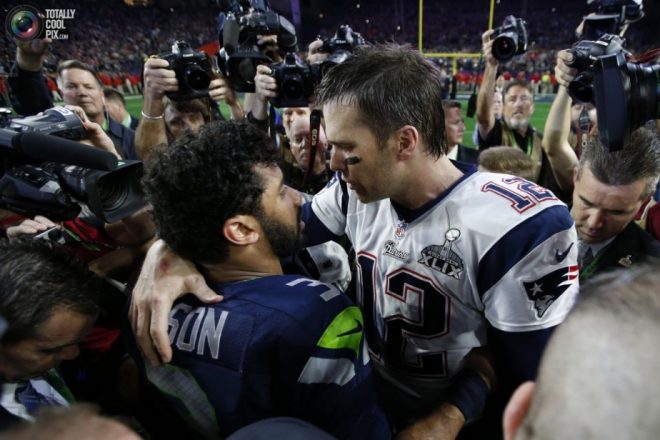 Seahawks Need Wilson and Graham to Be Healthy

The Patriots return home this week for a primetime matchup against the Seattle Seahawks on Sunday Night Football. This week’s game rekindles the 2014 Super Bowl rivals as they enter the second half of the season. It also could be a preview of a possible February matchup between two of the more talented NFL teams.

The Patriots (7-1), are just getting off their bye week. It came smack in the middle of the season and finds the Patriots on a four-game winning streak and in good shape health wise. The have a three-game lead in the division over Miami, four games on the Bills in the loss column and five on the Jets.

The Seahawks (5-2-1) defeated the Bills on Monday Night Football 31-25. The biggest issue with Seattle has been inconsistency and much of that has to do with their health. Seattle has been banged up physically on both sides of the ball. The defense hasn’t been as stout and the offense has struggled to run the ball.

Here are our Five First Impressions of the Seahawks:

No Beast Mode in the Running Game: The Seahawks running game has been mired in neutral for much of this season. Seattle is averaging only 82.1 yards per game entering their MNF game with Buffalo, and added just 33 yards on 12 attempts.

Christine Michael was ineffective against the Bills and had just one yard on five carries. He was replaced in the third quarter by rookie running back C.J. Prosise. The big, (6’1, 220-pound) rookie may see some extended looks this week as they search for a spark in the running game. But the two backs combined for just 10 yards on eight carries. They’ll need more from these two moving forward.

They miss RB Thomas Rawls who has been injured and isn’t expected back until November 20. Of course, the most dangerous runner may end up being the elusive and talented Wilson. When he’s healthy he can make plays with his feet and pressure the defense.

Wilson and Graham are a Potent Duo: The Seahawks got a healthy Jimmy Graham back this season and he’s heating up. Monday night against the Bills, Graham caught 8 passes for 103 yards and two touchdowns. That is his third 100-yard game of the season, which is two more than he had in 2014 and 2015 combined. Both of his scores were of the incredible variety, one-handed grabs (17 and 18 yards), in the end zone. He’ll provide a very tough matchup for the Patriots defense.

Wilson is probably healthier than he’s been all season and on Monday night, it showed. Coach Pete Carroll stated earlier that with Wilson rounding back into the form that they’d allow Wilson to open things up more offensively.

He was the key in the 28-point first half, running for a three-yard score, his first of the year and completing 14 of 17 passes for 229 yards and a pair of touchdowns to Graham. His passer rating for the first half was a near perfect 158.0. He finished with good numbers, 20-26 for 282 yards and two touchdowns for a passer rating of 137. The Patriots are aware of how difficult he is to defend when he’s able to move around and break containment. That will be a primary focus this week.

Seattle’s Defensive Dominance Continues: Granted the Seahawks defense is a bit banged up right now with the absence of Michael Bennett and Kam Chancellor, but this unit has been the gold standard for the past several years.

Since 2012, Seattle is head and shoulders above everyone else in the most important defensive metric….points allowed. The Hawks defense has allowed just 15.6 points per game and is far ahead of their closest competitor, the Patriots at 19.8. The NFL average is 22.9 points per game.

They’re fantastic at generating turnovers and since 2012 are second in the league with a +51 in the turnover ratio department. The Patriots are the top team with a +56 margin. The next closest team? The Cardinals at +27.

Seattle has been the top team the past several years in pass yards allowed and have the second highest QB pressure percentage. And they do so without having to blitz much. The Seahawks blitz on just 25 percent of opponents drop backs, but when they do, they’re very effective. Seattle gets pressure on 38.7 percent of their blitzes, tops in the NFL.

Seattle Getting Healthier for Second Half Push: The Seahawks have been a banged-up unit this season. We mentioned above how Wilson is just starting to round into form after suffering from a couple of different injuries. But he isn’t the only one who is getting healthy.

Chancellor, the Seahawks starting safety and emotional fireplug has missed four games with a groin injury but is expected back this week against the Pats. There’s no doubt that they missed his veteran presence as well as his physicality in the secondary.

Rawls is expected back in the Hawks November 20 game against the Eagles and Bennett and tight end Luke Wilson are expected to return to practice this week. Their availability for the Pats is still up in the air, however.

Tyler Lockett who got hurt in the Rams game back in Week 2, seems fully healthy for the first time since. He was a big factor against Buffalo, notching a 13-yard end around, a 43-yard kickoff, a 22-yard punt return, and a 17-yard reception.

Sherman Front and Center for Two Critical Plays: Not surprisingly, whenever the Seahawks play, CB Richard Sherman always plays a critical role for the Seahawks. He has against the Patriots in the past and no doubt will again this week. Last night at home against the Bills, he was involved in two plays that drew the ire of many people during the action.

During the Bills’ final play on offense, Sherman flattened Bills receiver Walt Powell in the end zone. Deadspin tweeted a picture of it out and ask “Wonder why this guy wasn’t open?” But looking at the play again on the tape, once QB Tyrod Taylor scrambles out of the pocket, that play was legal, so long as the ball wasn’t in the air. Sherman did the smart move and didn’t allow the receiver to get open.

He took a page out of Tom Brady’s book and quickly tweeted to Deadspin to “check the rule book.” And he was right.

He was also in the center of a bizarre sequence at the end of the first half. The Bills lined up for a field goal. Sherman, attempting to block it, rushed offside. He dove at the ball and took out Bills kicker Dan Carpenter as he skidded down on the field.

In retrospect, he should have been flagged twice, for the offside and the roughing the kicker penalty which would have set the Bills up for a very makeable kick at the end of the half. The officials compounded the problem with a serious screw up of not resetting the game clock after a spike which cost Buffalo five yards. Rex Ryan was justifiably furious after the game. One thing is for certain, Seattle is always the home of some crazy plays either at the end of halves or the game.

Sherman defended his actions after the game, stating, “I went straight for the ball. I didn’t go for the kicker. I slid for the ball,” Sherman said. “He should not have kicked it. Maybe he wanted to. I went for the ball. That’s where I went. So, if the ball gets tipped on the play, the rule is if it’s tipped there’s no flag.”