6 years ago at 6:05 am ET
Follow @SteveB7SFG
Posted Under: Patriots Commentary 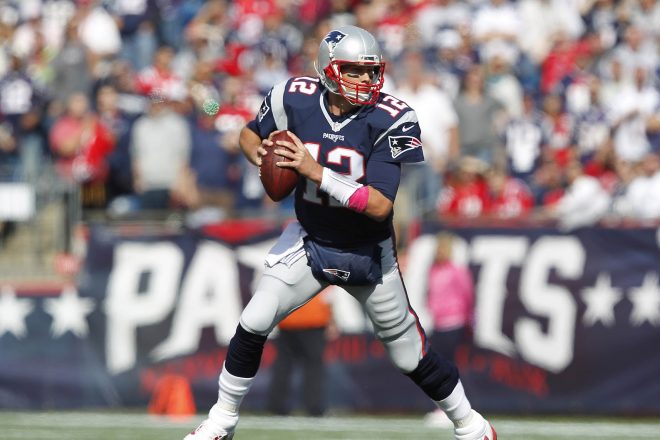 You Ain’t Seen Nothin’ Yet

The Patriots get their bye week at a perfect time, right smack dab in the middle of the season before they begin a very important stretch of games that will mark the outcome of the 2016 regular season.

The Jamie Collins trade furor has subsided a little bit and again good timing by Bill Belichick. The players get over their shock, get a couple of practices in, get some time off to lay in the sun somewhere and come back refreshed, and hopefully focused.

We’re breaking down our mid-term grade for the offense’s positions today and the defense and special teams tomorrow.

So… step back off the rail on the Tobin Bridge, buckle up and let’s look at the first half of an eventful and at times, tumultuous first half of the season. The Patriots went 7-1 much to the chagrin of the league and the rest of the teams as they are the top team in the AFC at the midway point.

Quarterback: A
One must go back a long time since the Patriots had three different starters at the QB position during a season. Thanks to Roger Goodell and the Deflategate 4-game suspension for Tom Brady, the Patriots were tested early in 2016.

Jimmy Garoppolo entered 2016 with more questions than answers. Unfortunately for him a painful shoulder injury after just a game and a half stopped what was a fantastic start for him in place of Tom Brady.

He played very solidly in the season opener in Arizona leading the Patriots to a win. The best part was, the coaches didn’t scale back any of the offense for him and he made good, quick decisions and didn’t turn the ball over on an interception. Against Miami, he was laser sharp and was picking the Dolphins apart before getting crunched by Kiko Alonso.

Jacoby Brissett took over and finished well against the Dolphins and played very well in a 27-0 win over the Texans. But his lack of experience caught up with the rookie QB in his next start against the Bills as the Pats were shut out 16-0. Overall the rookie’s body of work wasn’t bad at all considering he played the Bills game with a thumb injury that put him on IR right after the game.

Tom Brady took over Week 5 against the Browns and the Pats offense took off. The Pats scored 81 points in the first quarter of the season and 136 in the second. Brady on the season has completed 98 of 134 passes (73 percent), for 1319 yards (9.8 yards per attempt) with 12 touchdowns and 0 interceptions for a passer rating of 133.9.

Brady has looked as sharp as he’s ever had in a Patriots uniform. Despite missing the first four games, he’s on pace to throw for nearly 4000 yards and 36 touchdowns. Through the first eight games of 2016, Patriots QBs have thrown 0 INTs in 249 pass attempts.

Running Backs: B
My, my, how perceptions can change during a couple of months. Confidence wasn’t high with the running back position coming out of training camp. Both Dion Lewis and LeGarrette Blount were coming off serious season ending injuries and Lewis wasn’t expected until the 2nd half of the season.  No one knew what to expect from Blount, and many predicted that the starter wasn’t even on the team at the end of camp.

LeGarrette Blount still doesn’t don’t get much love around these parts but he’s a perfect fit for this offense and has performed much better than anyone predicted this summer. The Patriots leaned on the big back during the first quarter of the season with Brady and he produced. He’s on pace for a career-best 1200+ yards and 18 touchdowns.

James White improved his overall game and although he’s not a prolific back by any means in the running game, he’s gotten much better at running between the tackles. His forte is in the passing game; he’s been very good in the receiving department catching 29 passes for 258 yards and three touchdowns. And he’s steadily improving in the pass blocking department.

D.J. Foster has gotten just a few reps and hasn’t made a big impression one way or the other. But this is sort of a red-shirt type season for the rookie UDFA. He’s insurance if White goes down.

Wide Receivers: B+
Julian Edelman tweaked his foot injury early in training camp and again in the season and is just rounding into form. He’s getting back that quickness off the line and the elusiveness that can make people miss at either the jam at the line or the tackle in the secondary.  Edelman leads the team with 41 receptions, but for only 358 yards and a touchdown. Look for those numbers to increase as the season progresses.

Chris Hogan has made the most of his opportunities this season. With Martellus Bennett, Rob Gronkowski and Edelman receiving most the targets, he’s really the #4 option. But because of it, he’s nearly always facing single coverage. He’s shown that he can win the one-on-one matchups.  For the season Hogan has 19 catches for 391 yards good for a stellar 20.6 average and three touchdowns. He also has four catches for 35+ yards. While not a deep threat in the classic sense, against single coverage, he’s shown that he can get the job done.

Danny Amendola remains the underrated guy on the offense. Every season, fans believe that he’s going to get cut during training camp and every season, in limited opportunities he makes big, big plays. He has earned the trust of Tom Brady and although he may be ignored thru three-quarters, Brady will go to him with the game on the line. Amendola has 16 catches for 189 yards and three touchdowns in 2016.

Rookie wide receiver Malcolm Mitchell was off to a good start in preseason before suffering a serious elbow injury which slowed his progression. But he seems much farther along in the offense and with his chemistry with Brady than most would have believed at this early juncture. He’s had limited looks but has performed well and looks to be intriguing figure moving forward to 2017 and beyond.

The wide receivers were being used differently the first quarter of the season, but now that Brady is back, their production should see a nice increase as the season moves on. We’re already seeing some of that as Brady settles in. As a group, they are greater than the sum of their parts.

Tight Ends: A+
The Patriots tight ends have been outstanding so far in 2016 and the scary thing is, that both have yet to be fully healthy at the same time. But there is no arguing with their production thus far and as the season progresses, that should get even better.

Martellus Bennett has been hobbled by a bad ankle the past few weeks. He got injured in the Cleveland game on the first drive of the game but turned it around and ended up catching three touchdown passes in that game. The first time he’s down that in his career. For the season, Bennett has caught 31 passes for 402 yards and four touchdowns.

Rob Gronkowski started the year slowly with a hamstring injury, he logged on a single catch thru the team’s first four games as the team eased his way back into the lineup. Since the Cleveland game, he’s exploded into action. In the last four games, Gronkowski has 21 catches for 463 yards and three touchdowns. He’s averaging a ridiculous 22.0 yards per reception, which is outstanding for a fleet-footed wide receiver like a Julio Jones, but for a tight end? Those are uncharted waters.

It is going to be fun to watch these two tight ends work together when they’re both more or less healthy. Bennett carried the load for the first quarter of the season and Gronk has done so in the second half. The bye week couldn’t come at a better time, and perhaps the rest will allow Bennett to be a more active participant in the passing game.

Offensive Line: B
The offensive line didn’t make a bunch of changes during the offseason much to many people’s (including here), chagrin. The biggest change is that the team brought back longtime offensive line coach Dante Scarnecchia and used some of the draft capital in the Chandler Jones trade to select Guard Joe Thuney from NC State.

It hasn’t been perfect but it has been much better this season. The Patriots, instead of constantly tinkering with different combinations this year, have settled on a starting five and stuck with it, with the exception if someone gets banged up.

But LT Nate Solder’s return has been a pleasant one, and his play has been very good overall. Thuney’s rise at LG has been something to watch since minicamp as he’s been entrenched as a starter. David Andrews beat out incumbent Bryan Stork who was released. RG Shaq Mason has struggled at times but overall has played well. No one has benefitted more from Scarnecchia’s return than RT Marcus Cannon.

The much-maligned Patriots OL has steadily improved as the season has progressed which Coach Scar deems toward playing better basics with improved technique. The unit hasn’t been without struggles at times, but they’re far ahead of their 2015 production.

Coaches: A
Josh McDaniels has had the offense clicking, for the most part, all season. And he’s been seamless in going into the season with a QB that never started a game in Garoppolo, then transitioning to a 3rd string rookie QB (Brissett) due to an injury, and then going back to Brady.

The players haven’t missed a beat, everyone is pulling in the same direction, a testament to his coaching and preparation. Now with Brady back, the offense is just beginning to realize its full potential. McDaniels resisted the temptation to get all pass happy with Brady under center. They’ve kept their offensive balance. In the four games since Brady has returned, the Pats have passed 135 times and ran the ball 110 times.

That is keeping their opponents honest and not allowing them to tee off and come after the quarterback, much like we saw in 2015. That should continue into the second half of the season. But overall, his play-calling and game plans have been outstanding.

Check back tomorrow as we’ll take a look at the Patriots defense.