3rd Down Improvement Needed – When it comes to getting off the field on third down so far this season, the Patriots defense continues to struggle and, according to linebacker Dont’a Hightower, it’s become a point of emphasis recently.

Mike Reiss of ESPN pointed out that the club so far ranks 27th in the NFL on third down this season, with opponents having converted 34-of-77 through six games.  The other problem they’re having is that they’re also not forcing turnovers.  At this point in the season they have just four interceptions, more than half of what league-leaders Arizona and Kansas City have managed at this point, with each having 9.  They’ve also recovered just two fumbles on defense, which is second-fewest in the league.

But their issues on third down is something Dont’a Hightower says has been something they’ve focused on and they know needs to be fixed.

“Turnovers are one thing, but third down is third down,” Hightower said via Patriots.com. That’s something that’s going to come up unless you’re forcing turnovers first and second down, which, if it was that easy, I think everybody would do it.”

They’ve been better in the last two weeks since their debacle against the Bills where they allowed the Bills to convert 7-of-15 (47%), including 4-of-7  (57%) in the first half of that game where Buffalo mounted a 13-0 advantage they never relinquished.

Needless to say, they’re starting to turn things around, and Hightower says that they’re improving there, but they also need to get better in the red zone and do a better job of keeping teams from scoring. 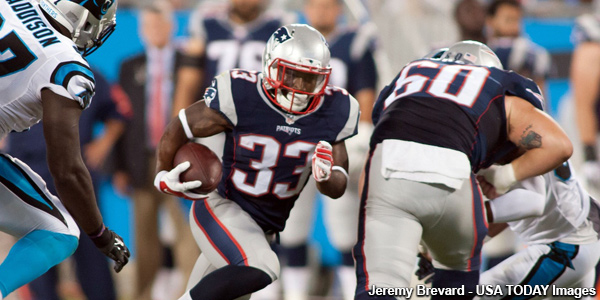 No Lewis, Jackson – For anyone hoping to see running back Dion Lewis or guard Tre’ Jackson, it sounds like they’ll have to wait a little longer after neither player has been spotted at practice this week.

The team reportedly had perfect attendance among all the active roster and practice squad players Thursday, but thus far, the players still on the physically unable to perform list, have yet to hit the field.

New England has been fortunate after receiving some good play from James White, who looks much improved this season, especially when it comes to catching passes out of the backfield.  That’s allowed them to weather the loss of Lewis, who they still seem to be hopeful could return at some point this season.

White is currently third in receptions for the team so far through six games, having caught 25 passes for 212 yards along with two touchdowns.  He’s also second in rushing on the team with 24 carries for 92 yards, good for a 3.8 yards-per-carry average.

Edelman on Pittsburgh, it’s “A Hard-Nosed Town” – Julian Edelman knows how passionate people are when it comes to football in the midwest, having played at Kent State, which is located in Kent, Ohio.

Oddly enough the Patriots receiver went to school about an hour and fifty minutes away from Pittsburgh, and he’s fully aware of the fan base that they’ll have to work around this weekend in what should be a noisy Heinz Field.

But according to Edelman, these are games he looks forward to and he’s excited for this match-up and he knows they’ll be ready to deal with it.

“Pittsburgh’s a hard-nosed town,” said Edelman this week.  “The Steel City. Going to school in the Midwest [at Kent State], it’s two hours from where I went to school, you realize they love football in that area – professional football, college football, they have great high school football. It’s a football area. There’s going to be some electricity there. These are the games you get excited for… I’m not going to say it doesn’t get to you sometimes. Sometimes [the crowd’s] roaring, but we prepare very hard for those situations.”

Collins back at practice – After sitting out last week’s game against the Bengals, there was another encouraging note with Jamie Collins, who’s been nursing a hip injury, back at practice.

Given the importance of this game, especially considering there could be playoff implications involved should the Steelers survive Roethlisberger’s absence and stay in the postseason hunt, having Collins back would certainly make a big difference and Hightower admitted that things definitely function better when his fellow linebacker is out there with him.

“It’s a lot more fluid having Jamie out there,” Hightower said Thursday via NESN. “A lot of the times, we coordinate things a lot together. I usually take care of the front, he takes care of the secondary. We have our own way of doing things. Sometimes, Jamie is just like, ‘No, you go ahead and you just make the calls, and I’ll play off of you.’”

His status for this weekend will be something to keep an eye on after being limited with his hip injury, with Friday’s injury report potentially the telling sign of whether or not he’ll be back in action this weekend.

The team announced that they signed LB Trevor Reilly to the practice squad, while releasing WR Shaquelle Evans.

Reilly is a former seventh-round draft pick who spent the last two seasons with the New York Jets, having played in 15 games in 2015 while finishing with 15 tackles and one sack.

READ NEXT:
Patriots – Steelers Keys, Who Has the Razor’s Edge?
Posted Under: Daily Patriots Rundown