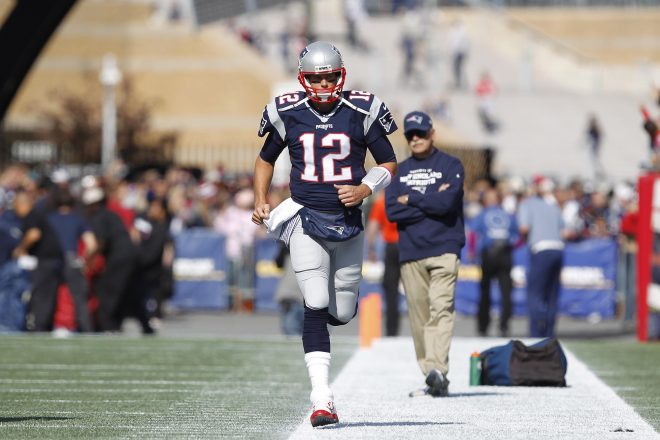 With the Patriots improving to 5-1 on the season thanks to their 35-17 win over Cincinnati, here are some thoughts after New England’s second game with Tom Brady at the helm.

1) Despite getting knocked around, Brady never waivered – Cincinnati certainly came in ready to spoil Brady’s homecoming and their game plan was obviously to try and hit him early and often, and they definitely got off to a good start. The Bengals had a lot of success in the first half, pressuring him quite a bit and sacking him twice.  He found himself under constant duress and the passing game had a tough time as the Patriots had just three pass plays of over 10-yards over the first two quarters while putting up 10 points as they took a 10-7 lead into the locker room at the half.  Fortunately, even with the pressure, Brady still finished the first half having missed just four passes, completing 12-of-16 for 136 yards and a touchdown.

But in the second half, the team made adjustments to their protection and as we know, when Brady has time to throw the football, he’s tough to stop.  From there he missed just two passes, finishing 17-of-19 (89%) for 240-yards and 2 touchdowns in the final two quarters as the Patriots improved to 5-1 on the season.

Overall, Brady finished Sunday completing 29-of-35 for 376 yards and three touchdowns, marking the second-straight week he’s gone over 300-yards passing.  He received plenty of support from the home crowd, with deafening chants of “Brady, Brady!” throughout the game, including on their first possession of the afternoon where it was so loud, Brady had to signal for them to quiet down as they began their drive.

Brady was still thankful for the support, and he’s glad they were able to come away with a win.

“Yeah, it was a great crowd,” said Brady.  “We always get great crowds, and they were into it today. I was glad we could do a lot better there in the second half and finish the game strong. We got off to a little bit of a slow start, but finished with 35 points so it was pretty good; against a good team.” 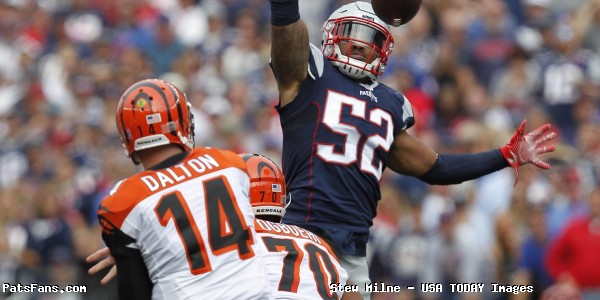 Elandon Roberts was one of the highlights of the defense on Sunday. (USA TODAY Images)

2) Another solid outing by the defense – Despite a first half that saw Bengals quarterback Andy Dalton hit 13-of-16 for 143 yards, in the second half they held him to just 8 completions on 15 attempts as the Patriots outscored them 25-10.  This is a tough Bengals team and better than people think, and it was a pretty good test against a talented group of receivers and a decent running back in Giovani Bernard.  The fact they shut them down over the final two quarters was impressive, and it was the defense that helped ignite the offense and change the course of the game.

After giving up a touchdown to start the 3rd quarter, the defense then forced a safety on the ensuing drive, which got them back within two points as New England trailed 14-12. That fired up the crowd and you could see the momentum begin to shift as the offense went out and marched down the field and scored a touchdown as Patriots took back the lead for good at 19-14 and never looked back, holding the Bengals to just a field goal from that point forward.

Overall the New England finds themselves second in the NFL in points-per-game allowed up after Sunday’s action, giving up an average of 15.2 behind the Vikings, who have been averaging just 12.6.

Belichick attributed their second-half success on defense to the fact that by getting out in front, it made things a little easier.

“I thought overall our coverage in the second half, we just matched it better,” said Belichick. “We played it better. We got a little more rush. Obviously, we had the lead. That helped too, towards the end of the game, so some of those things fell into place for us.”

3) Career day for Rob Gronkowski – It’s been quite the turnaround by Gronkowski, who had just one catch for 11-yards in the first two games but has gone out and had back-to-back 100+ yard games since Brady’s return.

On Sunday, the Bengals couldn’t stop him, with Gronkowski finishing with three plays of over 30 yards as he torched Cincinnati with 162 yards on seven receptions, five of which went for a first down as well as a touchdown.

In the last two games he’s caught 12 passes for 271 yards on 16 targets, including a team-best 4 catches on 6 targets for 116 yards on 3rd down, all of which were first downs.  With the veteran playing so well he’s opened up things down in the red zone and Brady, thus far, is 8-of-11 for 51-yards and five touchdowns in scoring territory.

Gronkowski did have a moment where he got baited by a Bengals defense that took a shot at his knees, which lead to an altercation in the game that ended in a 15-yard penalty for taunting, which he later apologized for during his press conference.

But watching Gronkowski go out and play at a high level has been encouraging and it will likely be important in the weeks to come as the Patriots are about to play some tough games, including a big one on the road next weekend against the Steelers. 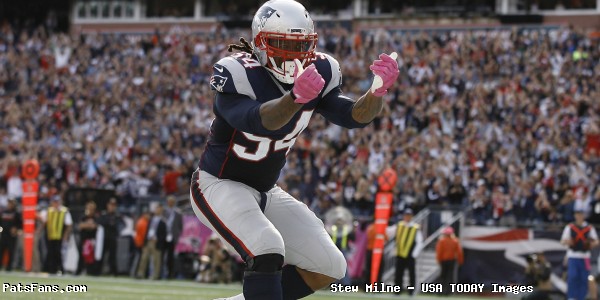 4) Hightower playing lights out right now – For a guy who has been banged up, it’s tough not to highlight the job that Dont’a Hightower has done the last two weeks.

He had another big game on Sunday, leading the team in tackles with 13 as well as finishing with a tackle for a loss, two quarterback hits along with 1.5 sacks, one of which went for a safety, his second in two weeks.

Two straight games with a safety is unheard of, and his teammate, Elandon Roberts, said it was big in giving them the momentum.

“That’s a real big play,” said Roberts.  “Anytime you can get explosive play like that, especially against a good opponent like that, that’s a real good play, big momentum shift and what not. This defense is just all out there trying to make plays for each other. We are out there for each other, our coaches and it’s the Patriot way and that’s all we’re doing.”

5) Gostkowski’s Struggles Continue – Stephen Gostkowski looks like a golfer who has a hitch in his swing right now, and it’s obvious his confidence isn’t quite back where it needs to be yet.  He took another step back when he missed an extra point Sunday in the third quarter that at the time put the Patriots up 25-14, and later had another kick that barely snuck inside the upright.  Oddly enough, he got off to a great start in this game, having booted a 46-yard field goal right down the middle on New England’s opening drive.

His struggles are reminiscent of a similar struggle that Vinatieri went through during his career where he missed a game-winning kick against Kansas City back in 1999 and had some issues before he got back on track.  The good news for the veteran is the fact we’re not even halfway through the year yet and there’s still plenty of time to turn things around.  Gostkowski’s fortunate that New England came away with the win, but he’s about to embark on a tough stretch as the Patriots have two big games coming up.

They play on the road next week against Pittsburgh in a game that, depending on how they finish, could potentially have playoff implications in terms of home-field.  The same could surprisingly be said about the Bills, who for now have rallied around Rex and Rob Ryan and are winners of four in a row, sitting at 4-2 on the season. They have the edge having handed the Patriots their only loss of the year, and the games between New England and any team Rex Ryan is coaching have certainly been interesting. Buffalo is always a tough place to play and with home field on their side for the rematch, Brady will likely have his work cut out for him when he battles them for the first time this season.

Thankfully for Gostkowski, with Brady back in the fold, the point differential has been such where a kick here or there hasn’t hurt them yet.  But they now play four of their next five games on the road and as the season goes on and the opponents continue to get tougher, these games might end up being a little closer.

This is Gostkowski’s first real bout with adversity and all the best ones are sometimes faced with it.  How he responds will most definitely play a key factor down the stretch and hopefully if history is any indication, like Vinatieri was able to do, he’ll work past it and deliver.