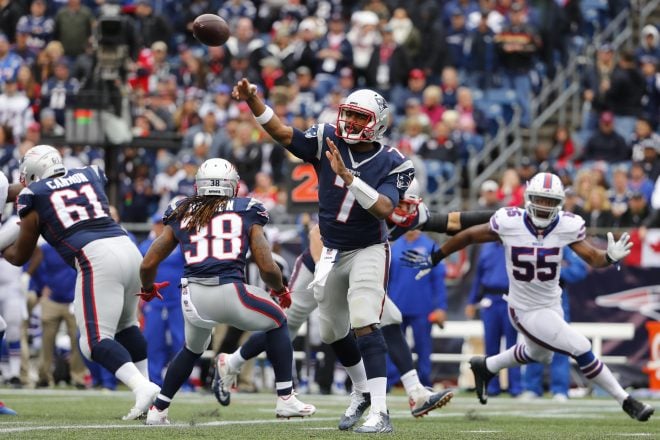 It took Drew Bledsoe until the end of November of his rookie season to learn the hard way about what it was like to be on the wrong end of a shutout in front of the home crowd.

For Jacoby Brissett, he found out on Sunday during a frustrating loss to the Bills at Gillette Stadium.

Sunday saw Brissett and the Patriots get shut out at the hands of the Bills 16-0, which was the first time the Patriots were shut out at home since November 28, 1993.  In that game, Bledsoe had to battle heavy rain and 68mph wind in a 6-0 loss against the Jets, completing 10-of-18 for 134 yards and an interception.

Bledsoe recalled the game after that stat was pointed out, and looking back he had some difficult elements keeping him from having much success that day given how bad the weather was.

However, Brissett was a little more fortunate on what was a relatively clear day weather-wise in Foxboro, but you could tell before the game even started that this one was going to be ugly.  The rookie quarterback took a shot from Bills safety Robert Blanton during warmups, with Blanton waving his finger at Brissett and saying something before giving the quarterback a hard shove as he was jogging off the field.

Brissett shook it off and kept going, but rookie receiver Malcolm Mitchell was with him as the two were leaving the field and immediately came to Brissett’s defense, with he and Blanton pushing and shoving each other before it escalated and had to be broken up by coaches. 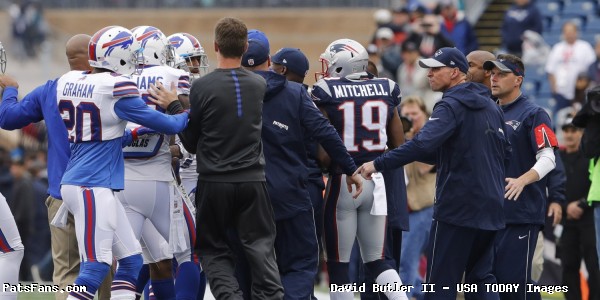 The Bills took a shot at Brissett before the game, but the Patriots couldn’t get even with them.

But if Brissett was hoping for any redemption during the game, he wouldn’t get it as the Patriots came out with a conservative game plan on the offensive side of the football in the first half and that, along with an untimely turnover, allowed the Bills to build a 13-0 lead they never relinquished.

Brissett attempted just three first-half passes and hit all of them, one of which included a 58-yard play to tight end Martellus Bennett, the longest reception of his career.  That put the Patriots in business at the Buffalo 17-yard line after they had failed to cross midfield on their previous three possessions.  However, four plays later, after center David Andrews was called for offensive holding on a 3rd-and-1, the Patriots found themselves now facing a 3rd-and-11.  On the play with his receivers covered and Buffalo’s defense bearing down, Brissett tried to scramble for a first down but disaster struck.  The rookie was drilled and fumbled the football, with Buffalo recovering the fumble at the Bills’ 9-yard line.

That play more or less was the story of an overall frustrating day for the Patriots.  There wasn’t much that went right for the Patriots Sunday, with the offense converting just 1-of-12 on third down while committing a surprising 9 penalties for 74 yards. They even also saw the normally reliable Stephen Gostkowski miss a 48-yard field goal on their first drive of the third quarter.

It ended what had been a great run and gave them their first loss of the season, and Bill Belichick admitted after the game that there wasn’t much that went their way Sunday.

It didn’t help that they couldn’t stop Buffalo in the first half, with the Bills marching up and down the field seemingly at will.  They controlled the football for nearly 20 of the first 30 minutes of the game, with quarterback Tyrod Taylor missing just 5 of his 22 attempts as he racked up 165 yards along with a touchdown, as well as converting 4-of-7 on third down.

The Patriots tried to run the football and get control of the game early, but the Bills did a good job against them on 3rd down and held them to 0-for-5 over the first two-quarters.

Overall Brissett had some good moments and showed plenty of promise for a player who was thrust into his role after Jimmy Garoppolo went down against Miami.  He managed both of his starts well but the thumb injury he suffered against the Texans clearly left him hampered early in this game before the coaching staff eventually took the training wheels off and let him loose in the second half.  The rookie completed 6-of-11 in the third quarter and 8-of-13 in the fourth, but couldn’t manage any points and it didn’t help that he found himself in 3rd-and-long situations on three of their five second-half possessions.

After shutting out Houston in their previous contest, the Patriots defense got off to a shaky start where they allowed 13 first half points. However, they actually did their job after halftime, holding Buffalo to just three second-half points.  But Brissett just couldn’t quite get the offense in gear and between untimely penalties, along with seemingly still being hampered by his thumb injury, there was ultimately just too much to overcome.

If nothing else, it was certainly a good learning experience for the rookie and something to build on.  After being shutout at home, Bledsoe went on to have a productive career.  Now that Brissett knows what that feels like, he’s left to face the reality that it will be a while before he gets a chance at redemption.

The good news is he earned the respect of his teammates, and that will help him when that next opportunity comes.

“You’ve got to give hats off to Jacoby [Brissett] today going out there,” said Rob Gronkowski.  “Much respect to him going out there and doing what he did today as a rookie.”