6 years ago at 7:00 pm ET
Follow @bob_george
Posted Under: Uncategorized 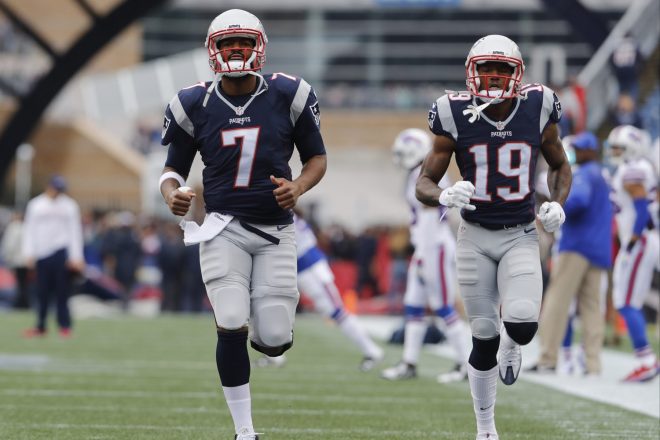 FOXBOROUGH – It’s finally time for Jacoby Brissett and Jimmy Garoppolo to return to their clipboards, and thankfully so.

The Patriots could not pull off what would have been a richly satisfying 4-0 record without Tom Brady. The Buffalo Bills came out with a ton of intensity, and an uncharacteristic show of poise and discipline, and blanked the Patriots 16-0 at Gillette Stadium on Sunday. The Patriots suffered their first shutout loss since 2006 at Miami, and their first home shutout loss since 1993 against the Jets. The Patriots are still 3-1, in great shape, and Brady can now re-enter Gillette Stadium once the clock strikes midnight on Monday.

Most everyone who dissects this game will sit back and say “The game was too big for Brissett”, or “Brissett could not handle the game when given some adversity”. While Brissett did make some bad plays and throws, the root problem is that the defense lost this game, playing one of their worst games in recent memory. Bad scheme, bad tackling, and lack of intensity and execution put Brissett in an impossible situation on offense.

The game went south for the Patriots on the first two plays of the game. Cyrus Jones took the opening kickoff two yards deep in the end zone, and Matthew Slater told him to down the ball. Jones ran a few yards, broke the plane of the goal, then stopped and ran back into the end zone. Jones then realized that he was risking a safety and took off, but was clobbered at the 9-yard line. Brissett found Julian Edelman in the right flat on the first offensive play, and Edelman took off on a 90-yard gallop before being downed at the one-yard line of Buffalo. However, former Bills receiver Chris Hogan was guilty of both holding and offensive pass interference on the same play, and the Patriots never recovered.

The Bills scored thirteen points on their first three offensive possessions, all of them drives of ten plays or more. This served two purposes; first, to establish an aura of dominance for the entire game, and second, to prevent Brissett from any chance of getting into a rhythm, however limited his performance may have ultimately been. For the first half, the Bills had a nearly two-to-one advantage in time of possession. Making things worse for the Patriots was that Buffalo won the toss and deferred, giving the Bills the ball to start the second half. Fortunately, that turned out to be a non-factor.

Tyrod Taylor, the Bills’ quarterback, was the benefactor of virtually no pass rush and soft zone coverage all game long, especially the first half. Taylor in particular picked on Logan Ryan, who played off Robert Woods all afternoon with adverse results for the Patriots. Woods led the Bills in both receptions (seven) and receiving yardage (89). Woods had a 10-yard catch on third and seven on Ryan on the first drive, then had a nine-yard grab on second and seven on the next drive. Woods burned Ryan for two catches for 21 yards on the third drive. Woods was allowed clean looks on inside slants, and Ryan played 5-7 yards off Woods on sideline passes. It seemed that the Patriots were bent on preventing long plays, but gave up way too much underneath which kept the defense out on the field for far too long.

LeSean McCoy, the former Eagle standout running back, had 108 all-purpose yards (70 rush, 38 receiving), and was second behind Woods in pass receptions with six. McCoy was able to get to the edge pretty easily, and gained much of his yardage on end plays. Mike Gillislee averaged five yards a carry on six carries, one of which was a 16-yard run up the gut out of the Wildcat formation on the first drive.

Another problem for the Patriots all afternoon long was missed tackles. Two plays in the fourth quarter encapsulated the tackling problems for the Patriots and basically sealed the shutout win for the Bills. On second down and 24 at their own 11, Jabaal Sheard broke through and completely whiffed on a sack of Taylor, who proceeded to complete a 17-yard dump pass to Charles Clay. On the next play, both Jamie Collins and Chris Long whiffed on sacks of Taylor, who then hit Walter Powell for ten yards and a first down after second and 24. Normally those guys finish the job, but not today.

If Brissett can be criticized, it was possibly on two plays. In the second quarter, facing third down and 11, Brissett took off on a scramble up the middle. Instead of sliding, he collided with Zach Brown and coughed up the ball, and Preston Brown covered the fumble. Finally, in the third quarter, facing third down and 19 at their own 44, Brissett had Danny Amendola wide open down the middle for a first down and a chance to get back into the game, but he overthrew Amendola. That is a throw that Brady can make in his sleep.

Brissett finished 17 of 27 for 205 yards, no touchdowns or interceptions. Marcellus Bennett led the Patriots with 109 yards receiving on five catches. LeGarrette Blount had 54 yards rushing on 13 carries, but could not furnish his usual fourth quarter output with his team trailing by two scores.

Brady returns to the Patriots this week, and will play next Sunday in Cleveland. That right there should energize the Patriots, who looked like they were looking past Buffalo and figured an easy win at home against a team which usually plays poorly at Foxborough. Any team coached by Rex Ryan can be expected to be tough on defense but very undisciplined at times, susceptible to losing games on stupid plays or stupid penalties. The Patriots had nine penalties on Sunday, three more than Buffalo. With Brady back, the penalties should abate as well.

Going 3-1 without Brady is still a great win for the Patriots. They took Buffalo lightly and the Bills came to play. The real season begins next week.

READ NEXT:
Brissett Learns the Hard Way, Winning in the NFL Isn’t Easy
Posted Under: Uncategorized