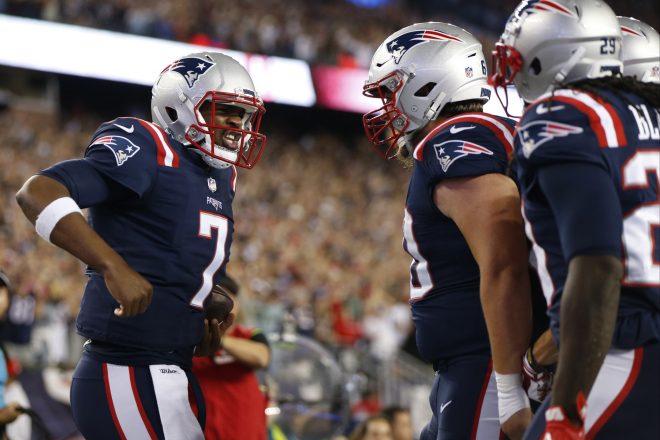 All-22 Film Shows Team Execution Was Spot On

Reviewing the game film from a Patriots game is always a good barometer to see how the team performed in a given game. After a 27-0 white-washing of an AFC playoff team, you can be sure that there was plenty of good execution by the offense, defense, and special teams to go around as it was a very impressive victory.

Going back and watching the game a few times in the past two days, it was very apparent the Patriots had done their homework and were extremely well prepared for the task of facing Houston on a short week.

The coaches studied the Texans’ tendencies and put together an excellent game plan. They put the players in a good position to win and the execution in many instances was flawless. Bill Belichick will no doubt have plenty of film that will show otherwise when the players have their meetings, but overall this was an excellent team win.

We’ve picked out a couple of different plays this week and we’ll take a look at how the team did.

Jacoby Brissett 27-yard TD Run: What can you say about a rookie 3rd string QB who is pressed into service and gets the victory on a short week with just two walk-thru practices to prepare? He did an admirable job and while his numbers aren’t going to jump off a stats page, he did exactly what the team needed from him. And the first touchdown was a fantastic call by Josh McDaniels and perfectly executed all around.

The Patriots align in “11 personnel” with three WRs, one TE, and one RB. They’re showing a run to the left side with Martellus Bennett aligned just off the tackle, Julian Edelman in the slot and Chris Hogan out wide. Malcolm Mitchell is the sole WR aligned to the right of the formation. LeGarrette Blount is the lone RB aligned behind Brissett who is under center. 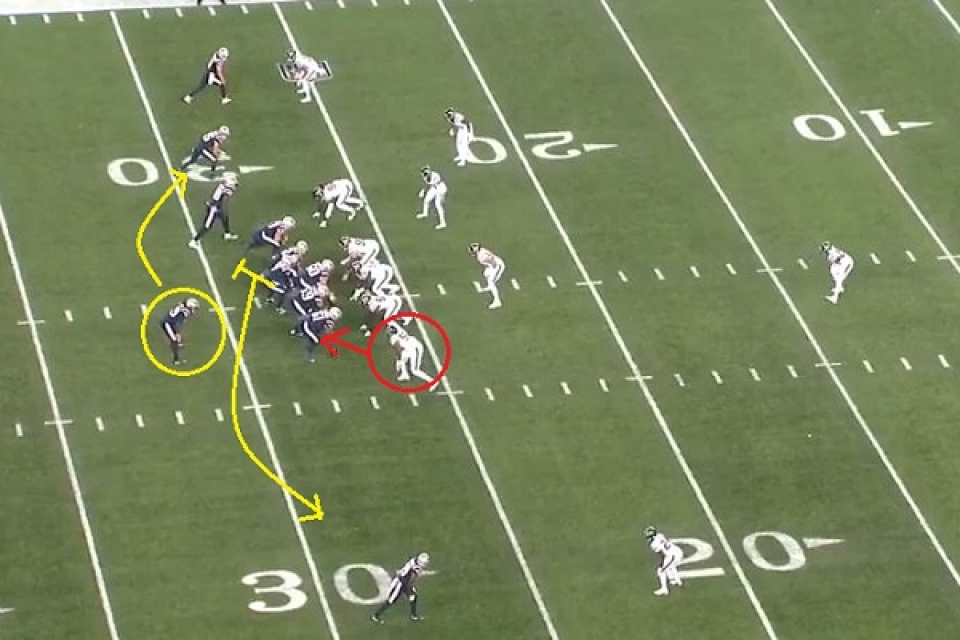 The Patriots sell the run to the right with everyone on the left moving like Blount is running a sweep or over the left tackle. McDaniels pulled out a new play with QB option run here. Brissett pulls the ball away from Blount and runs back against the grain to the right. Houston was aggressive in trying to stuff the run, J.J. Watt shoots the gap between Joe Thuney and Nate Solder on the Pats left and would have been in excellent position to hit Blount in the backfield. 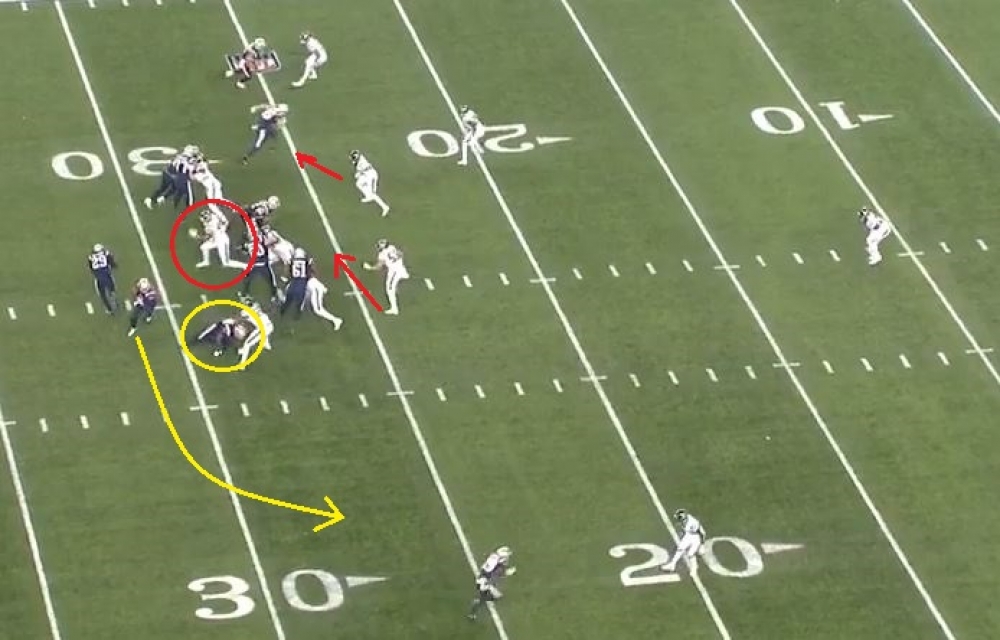 Benadrick McKinney lined up as the left OLB, tries to shoot inside to run down the play from behind. ILB Max Bullough flows to the right and takes himself out of position. Marcus Cannon sees Whitney Merciless pushing inside to the right and rides him right out of the play, Shaq Mason pulls out and cuts McKinney, giving Brissett time to reach the edge. 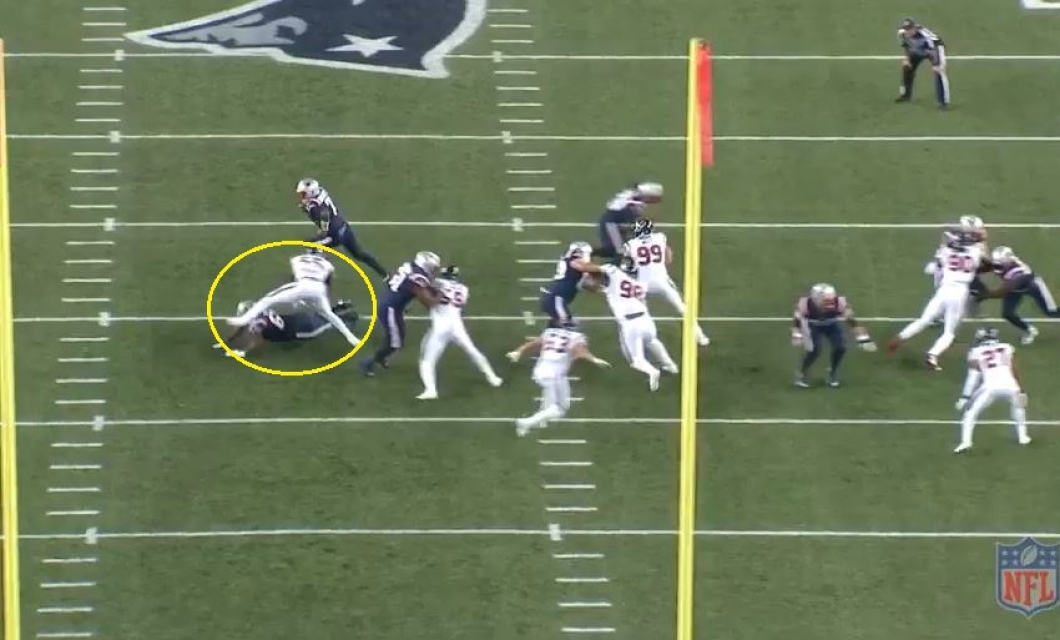 Once Brissett reaches the edge there is a ton of real estate for him to run, he eludes the safety Andre Hal at the five-yard line and Mitchell who was taking CB Jonathan Joseph with him deep down the field easily blocks him out of the play for the score. Joseph and Hal won’t want to review this play in the Houston film room.

Malcolm Mitchell 27-Yard Reception: The Patriots rookie WR isn’t making a ton of grabs in the early going this year, but he’s making an impact when he does. On this play in the first half, the Patriots are again in “11 personnel”, Mitchell is split wide left, Edelman wide right. Bennett is line up as an in-line tight end on the right side. Hogan comes in motion from left to right. James White is the lone back directly behind Brissett who is under center. Houston is showing pressure with five men aligned on the line of scrimmage with one deep safety. They’re playing off the receivers at the line which gives them a small cushion. 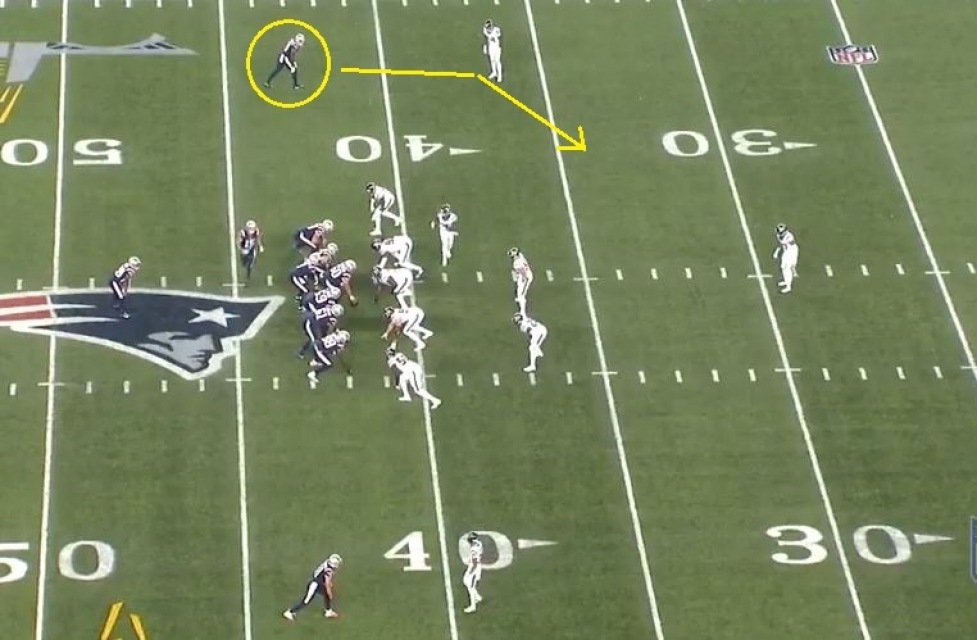 At the snap, Mitchell runs a quick slant and gets inside position on Jonathan Joseph where Brissett gets him the ball quickly. Joseph whiffs on the tackle and Mitchell is off. In a poor show of tackling, SS Quentin Demps then misses as well and a simple 5-yard slant turns into a 27-yard gain. Good execution by the Patriots, poor play by the secondary of the Texans. 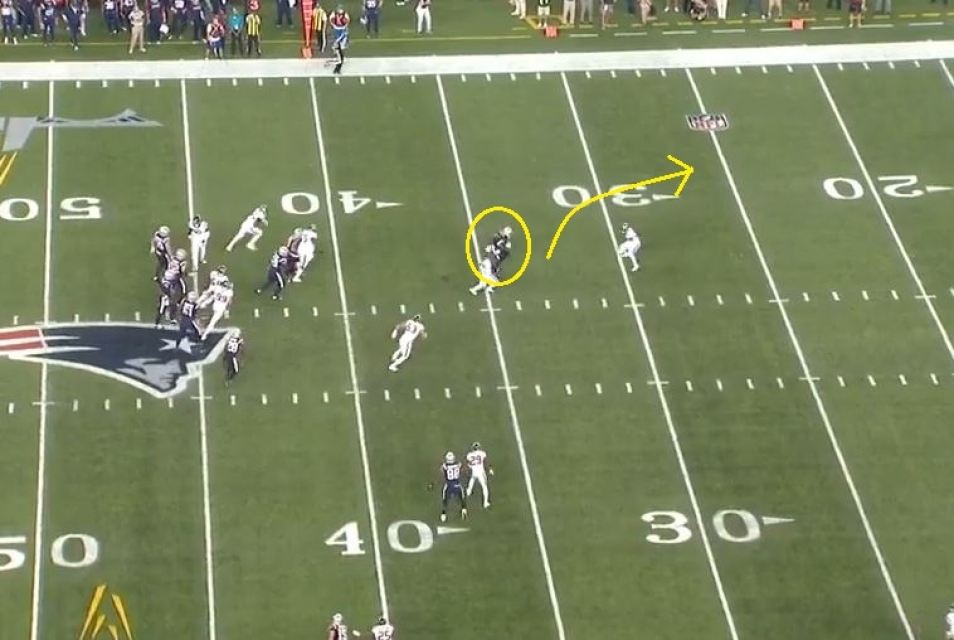 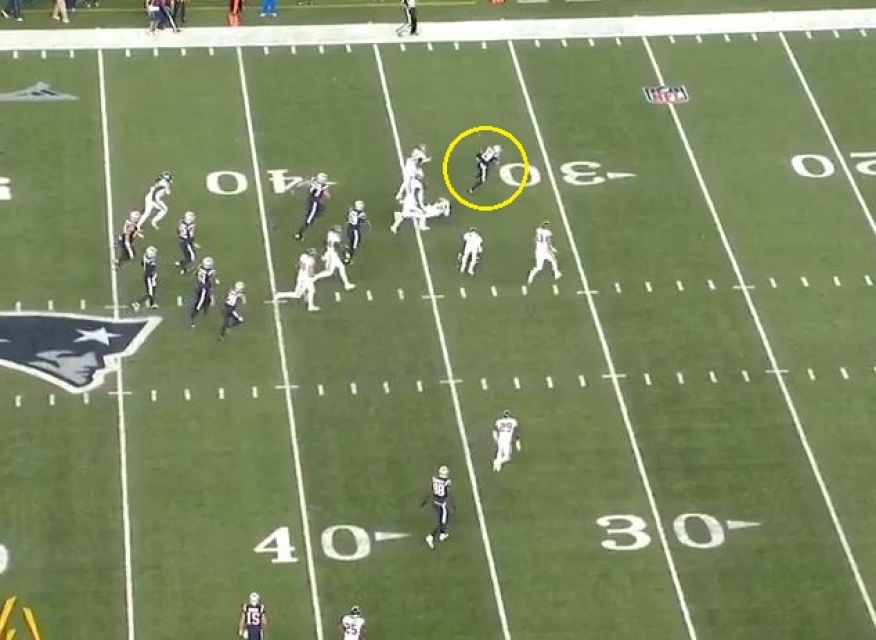 Jabaal Sheard Sack: Sheard had two sacks on the day but his first is a great example of what Chris Long has frequently stated as “playing team defense”. The play of Jamie Collins makes this play possible followed by a great individual effort by Sheard.

Houston is lined up going four wide, with two receivers split wide and aligned closely on each side of the formation. Jonathan Grimes is the lone back and he’s on QB Brock Osweiler’s right side. The Patriots are matching up in man coverage outside. But at the line, New England only shows two interior down linemen. DEs Long, Sheard, and LB Jamie Collins all stand and are showing pressure. Houston brings Stephen Anderson in motion from right to left and as he gets to the line, the ball is snapped and he runs a slant, presumably into the middle of the field where they believe Collins is vacating. 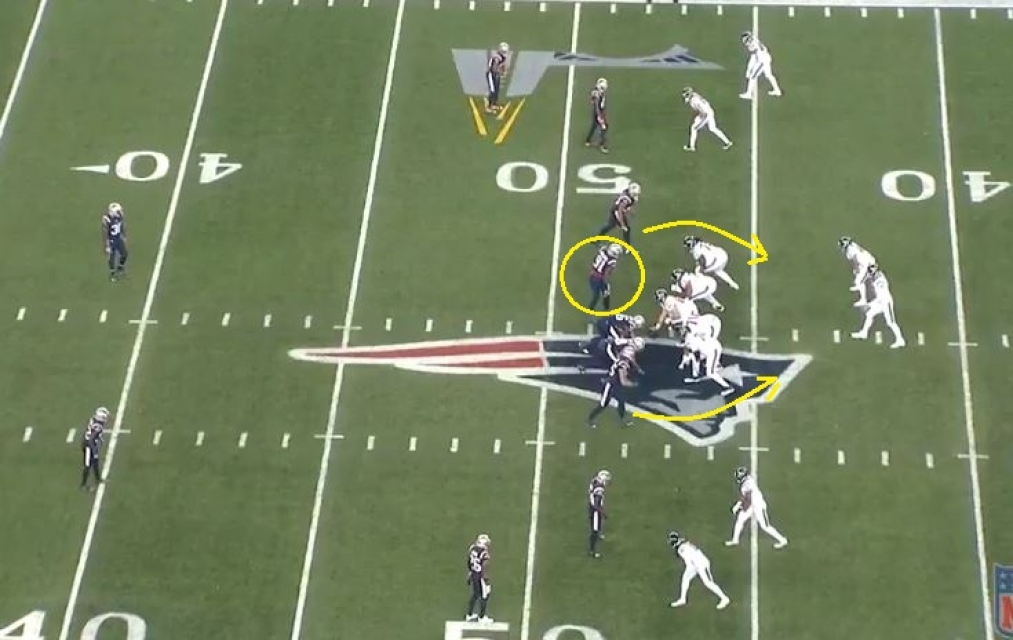 But Collins drops into coverage and is right in the window where Osweiler wants to go with the ball. Grimes tries to slip out into the right flat but gets caught up in the wash. Sheard puts an outside move on Derek Newton and beats him to the outside, where he flushes Osweiler and eventually gets enough of his shirt to throw him down. It is a good example where when all of the pieces are working in concert, good things happen. Collins movement forced Osweiler to hold the ball, just long enough for Sheard to reach him for the sack. 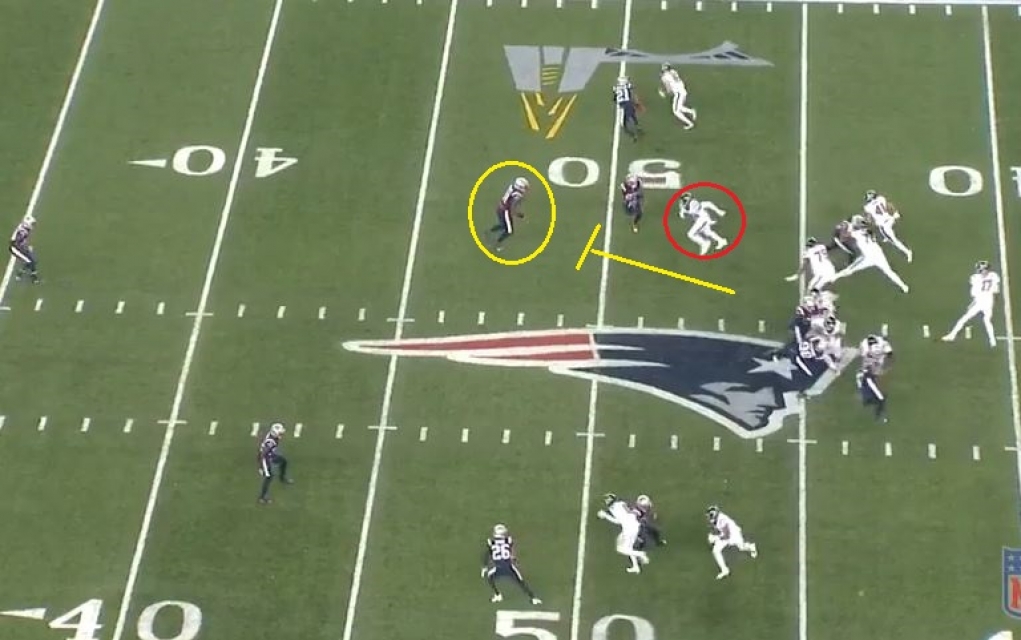 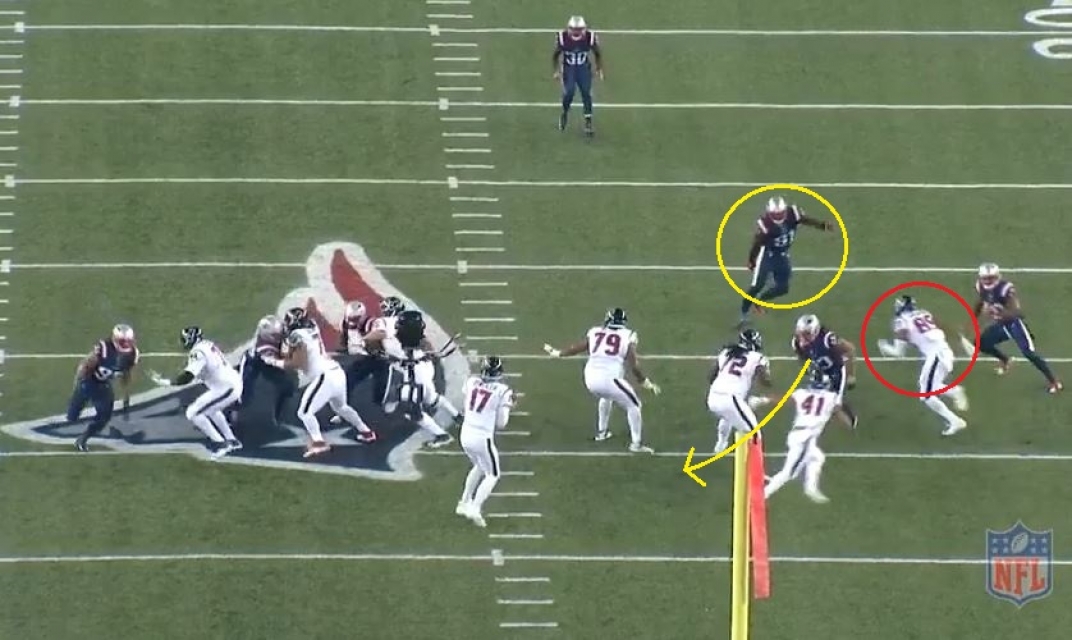 Blount 41-yard Touchdown: The Patriots offensive line did a very good job of run blocking in this game, opening enough holes for the team to generate 185 yards on the ground. On the final scoring play of the night, they once again show some nice execution.

The Patriots are lined up with their “21 personnel” package with 2 RBs, 2 WRs, and 1 TE.  Edelman and Hogan are lined up wide right, Bennett is on the right side in-line. Blount is the deep back in the “I-formation” with James Develin as the fullback. Houston is expecting the run to the right and has a heavy formation package favoring the exact spot where New England want to run. 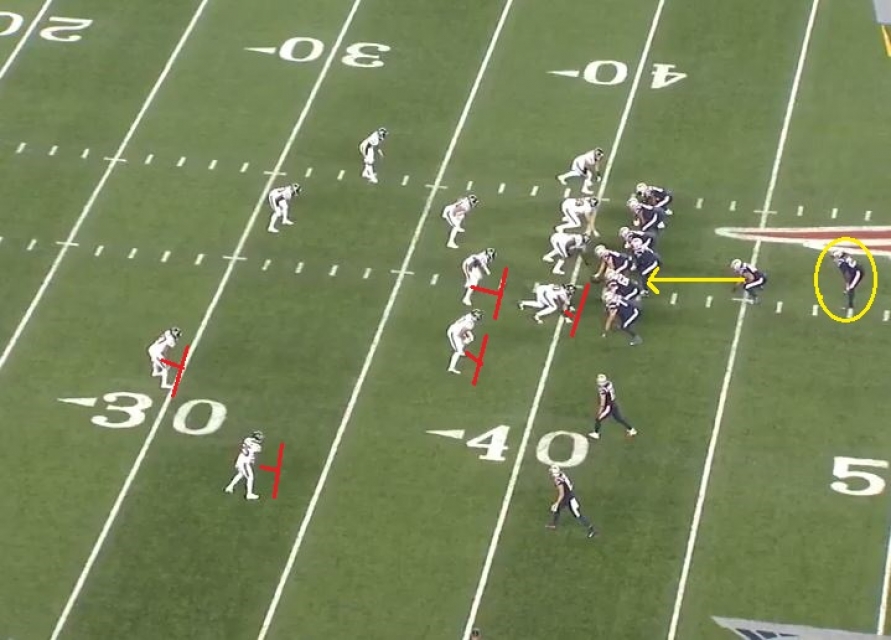 At the snap Nate Solder pushes Merciless to the outside, McKinney shoots the gap but can’t bring down Blount. Now the advantage goes to New England, they have the numbers and Blount has plenty of room to run. Develin gets downfield and seals off the backside pursuit. Hogan and Edelman do a great job of blocking downfield and seal off their men. Edelman in particular pancakes SS Quentin Demps. Blount, once he gets up a head of steam isn’t an easy man to bring down and scores the easy TD. 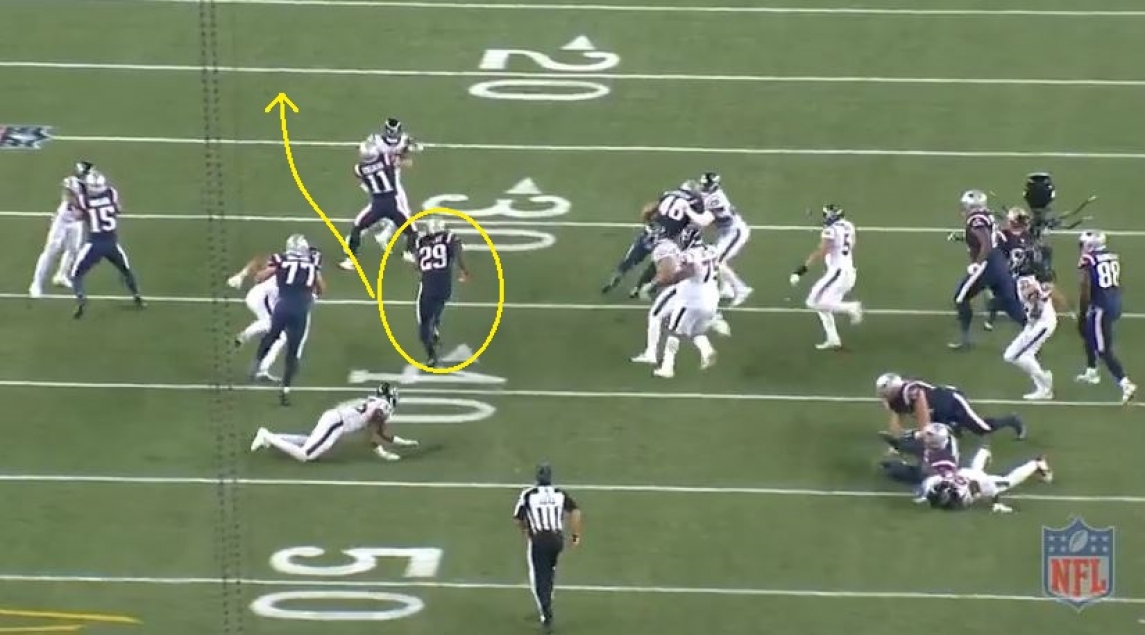