6 years ago at 8:19 am ET
Follow @SteveB7SFG
Posted Under: Patriots Commentary

The Patriots are 2-0 and sit atop of the AFC East after yesterday’s 31-24 win over the Miami Dolphins. And it is time for the Weekly Report Card. It was essentially a tale of two halves as they totally dominated the opening thirty minutes and were holding on in the end for the victory.

So how did the Patriots grade out? Still missing Brady, Gronkowski, and Lewis on offense and Ninkovich and Hightower on defense, they got out to a super-fast start. Things were compounded with the loss before halftime by Jimmy Garoppolo.

So let’s start with the offense and the players can come forward to pick up their grade sheets.

Quarterback: A-
Confidence was high for Jimmy G after his nice performance in Arizona and he certainly picked up right where he left off. Garoppolo was prepared, cool in the pocket and was nearly perfect at finding the open man.  The Dolphins made it clear that their stated aim was to make him uncomfortable in the pocket. Every time they blitzed or sent extra pressure, the Patriots were prepared for it.

The Patriots offense was unstoppable until Garoppolo’s injury.

In less than a half, Garoppolo completed 18 of 27 for 234 yards and three touchdowns. And he missed a couple of throws, most notably the one to Matthew Slater who had a couple of steps on the secondary and could have easily had another long touchdown. He spread the ball around to all of his wide receivers, the tight end, and the running backs. He was having a monster game right up until he was hurt.

Jacoby Brissett came on in relief and played decently. The offense was definitely toned down as he is not at the level Garoppolo is with having a command of the offense. He completed 6 of 9 for 92 yards. His real test will be on Thursday as he’ll get his first NFL start.

Running Backs: A-
LeGarrette Blount got the vast majority of the work here and once again paid back the Patriots for their patience in the running game. He wasn’t finding a lot of room in the first half but tackling a 250-pound battering ram wears a defense down and he got continually better as the game wore on.

Blount finished with 29 carries for 123 yards and a touchdown. The Patriots use him as a closer. With the lead late in games, they want him to close the deal by eating up the clock and chewing up yardage. When Miami narrowed the lead to 31-24 with 6:06 to go in the game that was the time. And the Dolphins knew they were going to run the ball. The Patriots went from their own to 25 to the Dolphins 26-yard line with Blount doing the bulk of the work. They ate up more than five minutes of the clock, forcing Miami to eat up all of their timeouts before finally being stopped. Blount had them in perfect position to put the game away with a chip shot field goal.

James White and D.J. Foster got a few touches in both the running game and passing game but this was the LeGarrette Blount show.

Wide Receivers: B+
Julian Edelman once again got things going for the Patriots early. With Miami trying to fluster Garoppolo, the shallow crosses underneath and the quick hits in the middle of the field were particularly effective. Edelman finished with 7 catches for 76 yards and had Jimmy G. stayed in the game, those numbers would have been much higher.

Danny Amendola had a productive day catching four passes for 50 yards and a pair of touchdowns. He was showing that he was able to consistently beat the coverage inside and Garoppolo was finding him and putting the ball right where he needed to.

Chris Hogan had another solid day as the third target in the Pats passing offense. He caught four passes for 59 yards including a couple of key third downs. Malcolm Mitchell had only a single catch for 15 yards Sunday, it was on the play that Jimmy G. was injured. The wide receivers as a whole were looking at much bigger days numbers wise had Garoppolo not been injured. The coaches play calls were much more conservative with Brissett in there.

Martellus Bennett had a huge day for the Pats.

Tight Ends: A
Martellus Bennett was outstanding a week ago being utilized mainly as a blocker. This week the Patriots targeted him more in the passing game and the results were very impressive. Bennett had five catches for 114 yards including a 20-yard touchdown down the seam as he was producing every time he got his hands on the ball.

The Patriots were able to find mismatches to use Bennett and he was sure-handed and solid. In the second half, Brissett faked a run to the right and when the Dolphins sold out trying to stop it, Bennett slipped out on the backside and caught the screen pass and rumbled for 37 yards, totally flipping field position.

Offensive Line: B
The storyline this week was how were the Patriots going to counter the Miami defensive line and would they give Garoppolo time to throw. They did a very good job of neutralizing the front four all day. Very little was heard from Ndamukong Suh, Mario Williams or Cameron Wake. And the offensive line opened holes for 161 yards in the running game.

Nate Solder and Joe Thuney were pretty solid overall and held up well in pass protection. Thuney took a couple of penalties that really hurt in keeping drives alive, however. But with the game on the line the coaches ran the ball behind those two and they produced. The duo was used in a pulling scheme and they opened the holes to close the deal.

The pass protection was better when Garoppolo was in the game, which may have had something to do with him setting the protection or just that Miami decided to sell out more on blitzes with Brissett in the game, being a rookie.

Defensive Line: C+
The Patriots bottled up the Miami running game in the first half while building a big 24-3 lead and then the Dolphins had to air it out in an attempt to come back. Still, Dolphins running backs had just 35 yards rushing on the day. The pass rush was a factor early in the game but once the Dolphins went to their hurry-up in the second half, it was virtually non-existent as the front four was gassed with no chance to rotate in and out.

Chris Long continues to impress. Healthy after two years of injury-plagued seasons, he was a difference maker on the edge. He had four QB hits and was directly responsible for both interceptions with pressure. He also got a gift sack when a snap sailed over Tannehill’s head.

Linebackers: C+
With no Dont’a Hightower the Patriots were entering this one short-handed. Much was expected from Jamie Collins and he had a decent but not a dominant type game. He made five tackles, had a pass defended and an interception where he sat down in coverage, and Tannehill lost him in his progressions and threw the ball right to him.

Collins had a scary collision with Pat Chung on a play in the end zone where Jordan Cameron caught a touchdown pass. Although both returned to action, this one will bear watching, especially on a short week with the Texans coming into town on Thursday.

Jonathan Freeny, Shea McClellin, and Barkevious Mingo all played and none stood out particularly good or bad

Secondary: C-
Again a tale of two halves for the unit. They were mostly very good in the first half and very porous in the second half where Ryan Tannehill basically had his way with them. Two turnovers saved the day, the last by Duron Harmon in the end zone with just 2 ticks left on the clock.

Both Jarvis Landry and DeVante Parker went over 100 yards receiving as they consistently were able to beat the coverages. I’m seeing the narrative “that Bill played prevent” in the second half. Bull. Look at the illustration below. Prevent defenses don’t entail having the defense with 10 men at the line of scrimmage. 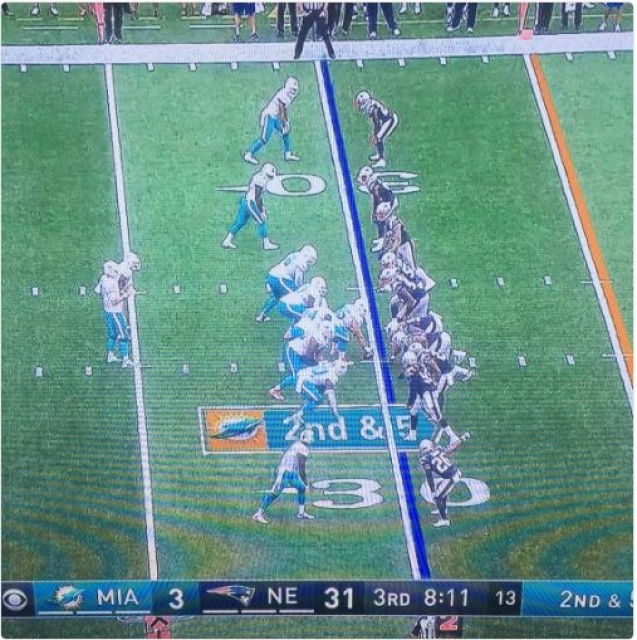 The secondary needs to tighten up their coverage, period. I know that Malcolm Butler was troubled by an ankle injury last week, and perhaps that was part of the reason, but this was arguably his worst in a Patriots uniform.

McCourty, Chung, and Harmon were good but not their usual selves on the day. There will be plenty of tape for Belichick and Matt Patricia to drive home the point that they have to improve this week.

Special Teams: D-
What happened to the unit that aced the exam a week ago. With the game in the balance and the chance to put the Dolphins away with a minute to go, it is unfathomable for Stephen Gostkowski to miss that chip shot field goal. That is not the ending the coaches were looking for. He has to make that kick, he nearly went from the hero to the goat in a week but was bailed out by Harmon.

Punter Ryan Allen averaged 32 yards per punt and was at 28 before his final 37-yarder boosted his average. Poor day indeed for the kickers. Unacceptable.

The return game featured a nice day for Amendola on punt returns but Slater was stopped at the 18 on a mortar kickoff. Joe Judge’s units likewise have some work to do.

Coaches: C
Josh McDaniels called another outstanding game for the offense, he had Miami reeling with some brilliant play calls, always one step ahead of Miami. Even after Garoppolo went down, he did what he had to do and put Jacoby Brissett in the best position to succeed by not putting too much on his plate. He gets the high marks on the staff.

Matt Patricia and Bill Belichick had a good plan on defense and it worked to a tee into the third quarter. But once up 31-3, the Dolphins mounted a furious comeback and the Patriots were unable to stop them. At one point Tannehill completed 20 of 21 passes in the second half, with the only incompletion a ball he threw at the feet of Kenyan Drake when the Patriots smelled out a screen. None of their adjustments on defense seemed to work. Which was troubling.