Lots of Tom Brady sightings this week. Between his interview on Esquire, his “virtual front page” on his Facebook account after the Patriots win in Arizona, the video with his son back at the Big House and his soon-to-be workouts with Wes Welker, the suspended Pats QB has been very visible.

Speaking of which, who wouldn’t love to be a fly on the wall during those workouts with Welker.

Ty Law, Willie McGinest Lead Patriots HOF Hopefuls:
Among the Patriots nominees for the Pro Football Hall of Fame, this year are two names that stand out and are certainly worthy. Ty Law and Willie McGinest. It will be interesting to see if either gets any traction this year.

Law was the definition of the term “shut down corner”, tough physical and durable. His 53 career interceptions tie him with Deion Sanders, and he has one less than Willie Brown and Darrell Green who all have gold jackets.

Law was a key member of three Super Bowl-winning teams, although he was hurt and missed the playoffs in 2004. His pick six against Kurt Warner in Super Bowl XXXVI is an iconic moment right up there with Adam Vinatieri’s kick. The best thing going for him, he was so successful and so physical against the top QB he was facing in that time frame, (Peyton Manning) that Colts GM Bill Polian lobbied the NFL Rules Committee, of which he was the chairman, to have the rules changed for contact downfield against corners.

He picked off Manning five times in the post-season, including three in the 2004 AFC Championship game, more than anyone else that ever faced the QB. It is time to see Law with his bust in Canton.

McGinest will have a tougher road because guys who play on the edge have to have those fantasy football numbers with the number of sacks to be inducted these days. Big Willie was versatile, playing both linebacker and defensive end for the Patriots and collected 86 sacks over his career. He played in four Super Bowls, winning three of them for the Patriots.

Nobody played bigger in big games and his importance to the defense during his time in New England was unquestioned. He was the cornerstone of those SB winning teams. His 16 postseason sacks remain an NFL record.

Say What?!?!
Not Patriots related but this one was a head-scratcher…the Rams come out for the opener on Monday Night Football and get skunked by the 49ers 28-0. And then we see the news that LA is rewarding head coach Jeff Fisher with a contract extension.

Correct me if I’m wrong here, but I don’t recall anyone calling for the Niners to be a juggernaut this season. So if you’re in the Rams front office, the total lack of effort/execution calls for you to reward your head coach who’s in the midst of FIVE straight losing seasons with an extension.

Can’t say I’m surprised, on one of our Patriots 4th and 2 podcasts back in the spring I said that Fisher would parlay the selection of QB Jared Goff with the top selection in the NFL Draft into job security, selling the idea that the young QB would need stability to get his career on track….Bingo. After Seattle waxes them this afternoon, then what happens?

In our AFC East notes, we’re going to talk about the coaching hot seats, more to that in a bit.

Mingo Could Be an Intriguing Addition Today:
With Dont’a Hightower out for today’s game, we’ll probably see Jonathan Freeny and Shea McClellin get the majority of his snaps this week against the Dolphins. But one guy who I’d love to see get some work on the defense is Barkevious Mingo.

Mingo led all Patriots STs snaps with 21 but didn’t play a single down on defense against the Cardinals a week ago. He was singled out by Belichick after the final preseason game against the Giants when he spent the week locked up in the film room trying to learn the defense.

He’s probably still trying to get completely on board after just a few weeks, but I’d love to see the athleticism of he and Collins together with the defense. They can both rush the passer, fill in the gaps in the running game and cover backs and tight ends. So will we see some of Mingo on defense this week? Let’s hope so.

Space Truckin’:
Patriots TE Martellus Bennett was sporting a NASA hat in the Patriots locker room this week and told ESPN’s Mike Reiss, “I do like outer space.”

It didn’t take long for NASA to pick up on this…after all they’re always watching the heavens for signs of intelligent life on other planets. They tweeted at Bennett, asking if he’d “like to space out with us.” Bennett was quick to reply and the big man may be a visitor to the facility at a future date.

We could be seeing the first unicorn in space, and most definitely he’d be the biggest astronaut ever. NASA has a height requirement limit of 6’4, Bennett at 6’6, 270, would put a strain on the door heights and portals for the shuttle. This one will bear watching. 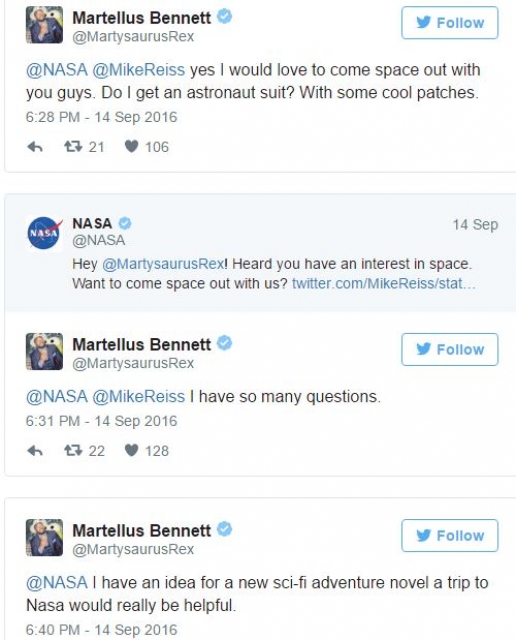 Who Do You Like This Week?
After picking the games pretty well a week ago (12-4), this week we have some intriguing picks. I am already 1-0, (NYJ), and have Carolina, Baltimore, Detroit, KC, NE, NYG, Pittsburgh, Washington, Arizona, Seattle, Denver, Oakland, Jax, Green Bay and Philly for the games on tap today and Monday. Early pick for Thursday Night Football, (NE over Hou).

Bills Offensive Coordinator Fired Amid Defensive Meltdown:
This is a pretty bizarre turn of events in Buffalo, the Bills are off to a 0-2 start and Thursday night the New York Jets shredded the Bills defense to the tune of nearly 500 yards of offense and 37 points en route to a 37-31 win. So, Head Coach Rex Ryan on Friday morning fired his offensive coordinator Greg Roman?

While there were rumblings behind the scenes that the players felt like the offense changed too much from week-to-week and lacked an identity, this move smacks of panic setting in. Ryan couldn’t fire his brother who is the nominally in charge of the defense. While the offense struggled at times with the play calls on Thursday, the Jets offense was the biggest reason for the loss.

Anthony Lynn takes over the duties of the offensive coordinator, and will be the fifth OC in Ryan’s last six years of coaching. That is beginning to look like a disturbing pattern rather than an anomaly.

Buffalo heads off to Arizona next week and New England in Week 4. There is a real chance that the Bills could be staring at an 0-4 start. That won’t play well with the rabid fan base that has been playoff-starved for 16 years. This won’t end well. While Jeff Fisher gets rewarded with an extension Ryan is on the hot seat and the clock is ticking.

Broward County Sheriff’s Union Wants to End Dolphins Security Details:
The Dolphins players who choose to kneel during the National Anthem and exercise their constitutional rights have drawn the ire of law enforcement in South Florida.

On Friday, the President of the Broward Sheriff’s Office Deputies Association Jeff Bell penned a letter and called for the “immediate” end of team-sponsored escorts in response to Dolphins and NFL players kneeling during the national anthem.

“As a law enforcement union, we certainly encourage people to exercise their constitutional right of freedom of speech,” Bell said in his letter.

“However, in certain professions, an individual’s freedom of speech must take a back seat to the organization or government entity that they choose to represent.”

Bell pulled no punches in his statement further adding, “We no longer support an organization that values financial profit over a minimum conduct standard. What good is it to ask singers to sing the national anthem, honor guards to perform services or ask the United States Air Force to conduct fly overs during the National Anthem if the same organization will not even set a minimum code of conduct for its players? Until further notice, I respectfully ask all members of law enforcement not to work any detail associated with the Miami Dolphins unless ordered to do so.”

The Dolphins tried to do damage control with owner Stephen Ross making a statement that said he is in support of his players. “I don’t think it was any lack of respect,” Ross said. “I think everybody here, our team and our whole organization, respects the flag and what it stands for, the soldiers and everything. These guys are really making a conversation of something that’s a very important topic in this country and I’m 100 percent supportive of them.” It is probably a good week for Miami to be on the road.

Revis’ Early Struggles Put a Damper on Jets Impressive Win:
Is Revis Island a thing of the past or is it just some early season struggles? If the first two games are any indication, the shut-down corner may be getting at the age where their skills begin to erode. But two games is just way too soon for panic to set in.

On a morning where NY sports talk radio should have been talking about the game that Ryan Fitzpatrick had in shredding the pass defense of Buffalo, (where were the safeties on Thursday night?) instead, many people were openly wondering if Revis was done.

After Andy Dalton had a perfect passer rating of 158.3 in the opener while targeting Revis, he was beaten badly for an 84-yard touchdown by Marquis Goodwin. And nearly another but the throw from Tyrod Taylor was thrown outside while his receiver went inside. One thing IS for certain, opponents are shying away from Revis right now they’re targeting him. This will bear watching in the coming weeks to see if the veteran can turn things around

By: Robert Alvarez
The Date and time for Vince Wilfork's Patriots Hall of Fame induction ceremony is announced by the team,
25 mins ago