Home Cooking Is the Best Recipe for Success

The Patriots take on the Miami Dolphins in their home opener for the 2016 season and after a satisfying and hard-worked win in Arizona, they’ll be looking to keep the momentum going. Miami also opened their season out west but fell on a last-minute touchdown drive by Russell Wilson. As we all know, divisional games are very important so both teams are looking to start that part of their season off right.

We’ve picked three players who in our opinion must play well for the Patriots to pull out a victory on Sunday. This week, we’ve picked out two more for the offense and one for the defense. We hit on two out of the three a week ago. Chris Long and Chris Hogan did indeed have solid games for the Pats, but Rob Gronkowski didn’t play or even make the trip a week ago.

Here are our three players from a Patriots perspective to watch on Sunday afternoon:

Wide Receiver Julian Edelman: This could easily be Jimmy Garoppolo because Miami has already stated that their prime focus on defense is going to be making Jimmy G. uncomfortable in the pocket this week. So if they decide to bring the heat and blitz? Julian Edelman becomes the safety valve and the prime player to make them pay for that. For this reason, Edelman becomes our (and Jimmy’s) prime guy to watch for. 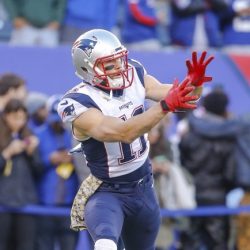 Julian Edelman has been a handful for the Dolphins in the last four meetings he’s appeared in.

Edelman is a very smart player, he and Tom Brady have been on the same sheet of music for several years. They can recognize, pre-snap what the coverages will be and what routes that they’ll have to run to be successful. I expect the Patriots to spread them out quite a bit and make them declare their intentions on obvious passing downs.

Edelman’s last four games against Miami have been impressive, with him grabbing 33 catches for 403 yards and 4 touchdowns. That works out to 8.3 catches for 100.8 yards and a touchdown per game. Similar to the game last week, look for Garoppolo to look Edelman’s way early and often to get the chains moving.

Look for the Patriots to put Edelman in motion to get him a free release off the line. He will be the prime target for the Dolphins to stop in the passing game, so it should prove to be interesting to see how they match up with him.

Running Back James White: The Patriots third down pass receiving back, may see more snaps this week. With Miami looking to stop LeGarrette Blount and make the NE offense one-dimensional, the “wide-9” look of Miami’s defensive ends may have Josh McDaniels try some quick hitters in the gaps with White trying to find a crease in the run defense.

But his pass receiving prowess will be used this week, especially when the Patriots opt to spread out the defense. They’ll look to isolate White on a linebacker and create an obvious mismatch. White performed well a week ago, catching 5 passes for 40 yards including a 21-yarder but his biggest catch was arguably the 3-yard conversion on third down where he beat Tony Jefferson to the inside and used his body to shield the ball for a key first down.

White will be called upon to pass block this week as well. It was a task that he performed well at in Arizona during the game last week. With the other weapons that the Patriots have in the passing game, I look for White to be a very productive weapon this week. Assuming that the Dolphins do blitz, the screen game with White will become of increased importance.

Linebacker Jamie Collins:  The Patriots most athletically gifted player on the defense if not the entire team, Collins’ role will become even more important with the expected absence of Dont’a Hightower. Collins is outstanding in both run support and in the passing game. His speed at filling the gaps will be needed as well as covering Arian Foster out of the backfield.

Jamie Collins is the most athletic of New England’s defenders

Miami will want to stay balanced this week on offense and get Foster involved in the passing game as well. He had their longest reception of the week against Seattle, good for 50 yards so Collins will no doubt be tasked to cover the veteran running back. We may see more of Jonathan Freeny inside more in the Hightower role this week, but the onus on responsibility will reside with Collins.

Another aspect of Collins’ game to watch for this week is the A-gap blitzing. He and Mingo with their speed and athleticism can be disruptive against Ryan Tannehill by coming on the delay blitz up the middle. Miami’s offensive line has improved with Laremy Tunsil this season, but without center Mike Pouncey again, look for Collins and the Patriots to test the middle of that offensive line and try to force Tannehill into making mistakes or forcing a turnover or two.